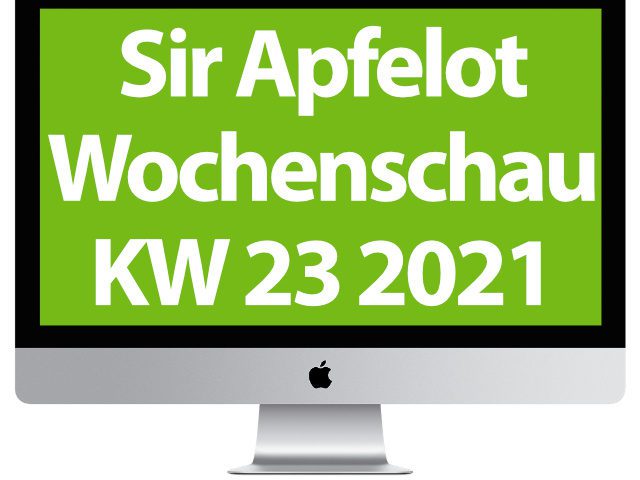 It is the week of Apple WWDC21 and accordingly the Sir Apfelot newsreel will also revolve around this topic. In addition to the World Wide Developers Conference, there was also some other exciting news this week. You can read below which Apple and tech news caught my eye in calendar week 23 of 2021. Among other things, these topics are included: update of the Corona warning app, repair bonus instead of scrapping bonus, information on postponed MacBook Pro, new forecast for the first Apple AR headset, the next Mac Pro again with an Intel chip, and more.

Included in the Sir Apfelot Wochenschau for calendar week 23 in 2021: Update for Corona warning app, repair bonus instead of scrapping bonus, new forecast for the first Apple AR headset, multiple app icons under iOS 15, and more.

This year's Apple World Wide Developers Conference started on Monday with a keynote. The pre-recorded presentation from Apple Park in Cupertino brought everything new to iOS, iPadOS, macOS, watchOS and tvOS to the public. It was streamed from 19:00 p.m. Central European Summer Time and lasted around an hour and 45 minutes. You can find our contributions here:

If you have even more insights and special content for developers - e.g. B. Workshops, presentations and developer tools - if you want, I recommend them Developer app from Apple. This provides everything you need to get started with the topic as well as all the important content of the current WWDC. There is also a daily “recap”. You don't necessarily have to download the developer app for this, because it is also uploaded to YouTube. With this link you come to the video overview of Apple's YouTube channel.

Update of the Corona warning app: Enter vaccinations and use them as digital proof of vaccination

The RKI's corona warning app is now available in version 2.3.3. In addition to some bug fixes, the update also brings a new function, namely the digital vaccination certificate. "You can now add your vaccination certificates in the app and show them via QR code. 14 days after the last vaccination, the app shows the complete vaccination protection.“It says in the information about new functions after the update has been carried out. If this does not run automatically for you, then simply open the App Store on the iPhone and call the Product page of the app and taps on the "Update" button.

Thuringia: Repair bonus for longer use of electrical appliances

"Anyone who has their smartphone, laptop or other electrical equipment repaired and not thrown it away receives a subsidy from the state“, It says in one Post by Giga. This means that the repair of devices is more worthwhile than the fact that when comparing the repair and purchase costs, throwing it away is seen as more profitable. The program starts on June 15, 2021 and is initially limited to low costs. Thuringia wants to contribute 50% of the repair costs, but a maximum of 100 euros per household. Certainly good for acute cases of a display or battery that needs to be replaced, but nothing for extensive upgrading of all devices. There are even more details at the consumer advice center Thuringia.

Education in online retail: Recommendations and advertising should become transparent

In order to implement an EU directive in Germany, the Bundestag passed new laws for consumer protection. Heise has details on this online at this point summarized. In essence, it is about promoting, recommending and evaluating goods on the Internet becoming more transparent. In the future, Amazon and Co. will have to disclose how the results for search queries come about, which parameters are weighted and how, etc. Commissions, for example on comparison portals, must also be mentioned. Amazon and Co. should also show how they ensure that customer reviews actually come from those who bought the product. Influencers, bloggers and the like must also identify advertisements if products or services are advertised for a fee.

Indications of a postponed MacBook Pro with M1X chip

There are only indications that may serve the search engine optimization ... but nevertheless Apple apparently used tags like "M21X" and "M1X MacBook Pro" for the stream of the WWDC1 keynote on Monday on YouTube. Does that mean that the MacBook Pro with the new chip should be presented and at the last second it was postponed until later? Or did Apple respond to the rumors revolving around it and want the video of the keynote to be found by those who are looking for information about the MacBook with the M1X chip? All of this leaves a lot of room for speculation and rumors: D (Source)

Will the Apple AR headset hit the market in mid-2022?

For the second quarter of the coming year, the first headset for augmented reality (AR) from Apple is apparently being planned. At least that's what it says in one Post from iTopNews, where you can get to the Apple connoisseur Ming-Chi Kuo called. The headset should work like those for Virtual Reality (VR), but also offer a view of the outside through cameras on the front. The combination of the camera images and AR elements should then result in an immersive, augmented reality. A flatter version, which could perhaps represent the "Apple Glasses", is to follow in 2025. Let's see if the chip crisis, which is supposed to last until 2023, will work that way (Source).

Under iOS 15: Place the same app several times on the iPhone home screen

After the WWDC21 keynote and the presentation of iOS 15 on Monday, the first developer beta came out. There were direct online insights from people who tried the system. One picture went viral on Twitter: an iPhone with the home screen full of Twitter symbols. Behind this is the option of placing an app or its icon as a link several times. Why? Benjamin Mayo shows that in one Entry on 9to5Mac: Due to the new "Focus" feature, certain home screens can be hidden depending on the mode. If an app (e.g. music or Spotify) is to be available for “Personal” as well as for “Work” and “Sleep”, it must therefore be possible to place it several times.

Is there a new Mac Pro coming with an Intel chip?

This info is supposed to be hidden in the new Xcode beta, as it is in a Entry of 9to5Mac is called. It is said to have named the Intel Ice Lake Xeon processor. If a Mac Pro were to come onto the market with this processor, it would be confirmation of rumors that had already arisen that the Mac Pro, apart from all other Mac models, will not yet be equipped with the "Apple Silicon". It is not yet clear when the first professional Mac with an M-Chip will come onto the market. Because Apple's two-year transition period from Intel to a complete M-Chip portfolio started in November 2020. That could mean that the Mac Pro with Apple Silicon might not come until the end of 2022.