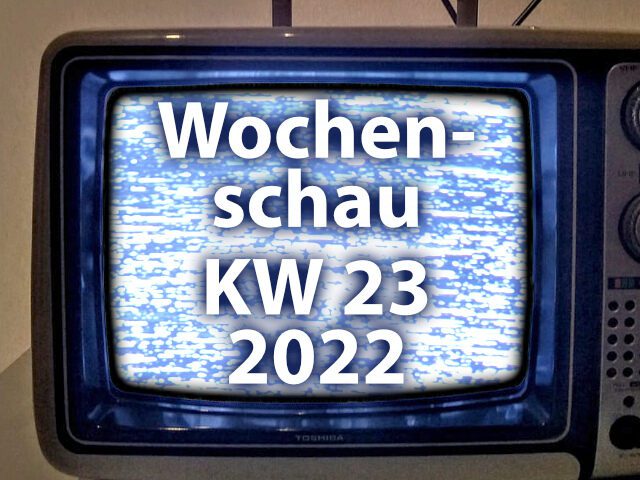 The week of WWDC22 is coming to an end. In addition to reports on the World Wide Developers Conference, there were other Apple and tech news this week. And that's exactly what this Sir Apfelot newsreel is all about. Here you will find the messages from calendar week 23 of 2022 that particularly caught my eye. Among other things, these reports are included: Details on WWDC22 Keynote, criticism of plans for EU network expansion, USB-C charging standard in the EU from 2024, minor damage to the James Webb telescope, autonomous ships cruising the world's oceans, new functions in upcoming Apple systems and more.

Also included in the Sir Apfelot newsreel of calendar week 23 in 2022: News from WWDC22, USB-C charging standard in the EU from 2024, James Webb telescope hit by mini meteorites, two autonomous ships on the Atlantic and Pacific, Apple promises a solution for MacBook speaker issues, and more.

The World Wide Developers Conference of this year ends today. On Monday she started with a keynote in which, among other things, the new versions of iOS, iPadOS, macOS and watchOS were presented. But the new M2 chip and laptops equipped with it were also shown. The topics I have kept so far can be found in the following list. But please keep your eyes open, because several posts with detailed considerations are already planned for the coming week.

For more information, content, sessions, texts and videos for this week, visit the Apple Newsroom, on the Apple developer website or well arranged in the Developer app. There are also recap videos on the Apple's YouTube channel.

Like before reported a few weeks ago, there is a plan at EU level to ask large Internet companies such as Meta, Amazon, Netflix and the like to pay for the network expansion. An open letter is now directed against these plans, but it does not come from the Internet giants themselves, but was signed by several organizations such as the Chaos Computer Club, D64 - Center for Digital Progress, Digital Courage, European Digital Rights and others . In which two-page letter, about the heise online this week berichtete, the financing model is described as a threat to net neutrality. In addition, large network operators (Telekom, Vodafone, Telefónica, etc.) received double subsidies, while small and local operators got nothing.

Now it's official: from autumn 2024, USB-C will become the standard for charging sockets on electronic devices in the EU. In addition to smartphones and tablets, this also includes e-book readers, game consoles, headsets, cameras and the like. Among other things, the iPhone ticker is this week addressed the topic. The post also emphasizes that the efforts to have a unified charging port and thus the use of one charger on all devices serve the goal of reducing e-waste - up to 11.000 tons annually. Laptops should also only come onto the market with USB-C as a charging option no later than 40 months after the new regulation comes into force.

Like heise online along with many other things this week pointed out, NASA reported the impact of a micrometeorite on the James Webb Space Telescope. Although there were corresponding simulations before the start and even a few impacts from the smallest meteorites in space, the current case relates to a new magnitude. The size of the object was neither tested nor calculated. Accordingly, the collision is now referred to as an "unavoidable random event". The damaged C3 segment was then realigned to compensate for the consequences of the incident. The schedule for the publication of the first scientific images on July 12, 2022 should be adhered to.

Autonomous Ocean Crossing: IBM on the Atlantic, Hyundai on the Pacific

Let's stay with heise online for the interesting reports of the week. Because there were two reports on autonomously driving ships on one ocean each. The IBM ship "Mayflower 400" in the slim design "made the Atlantic crossing on Sunday after 40 days and a series of mishaps", is it [called in this source. It went from England to Canada without a crew and only with the "AI Captain" on board. In addition to the demonstration model on the one hand, there was also a merchant ship on the other side of the world. As reported here, it drove about 10.000 km (half of the total distance) independently at "Autonomy Level 2" with a crew and surveillance. This means that it was able to correct the course on its own.

Last week Apple ignored the speaker problems of current MacBook models - we reported here. But now I have one Post read by iFun that Apple recognizes the problems as "known" and wants to work on a solution. "Of course, the current statement should not be overestimated, especially since the manufacturer does not make any time commitments", but it says. It is also advised to continue to report any problems that arise to support, including documentation of the affected software versions.

As noted above, Apple unveiled new operating systems for iPhone, iPad, Mac and Apple Watch on Monday. However, only the most important innovations were presented, some others only appear in the Beta versions, which will be issued until the public release. Some pages have already dealt with the first discoveries this week. Here is an overview of the "hidden" new functions:

What innovation or improvement in Apple's operating systems coming out in the fall do you like the most? Feel free to leave a comment on the topic!