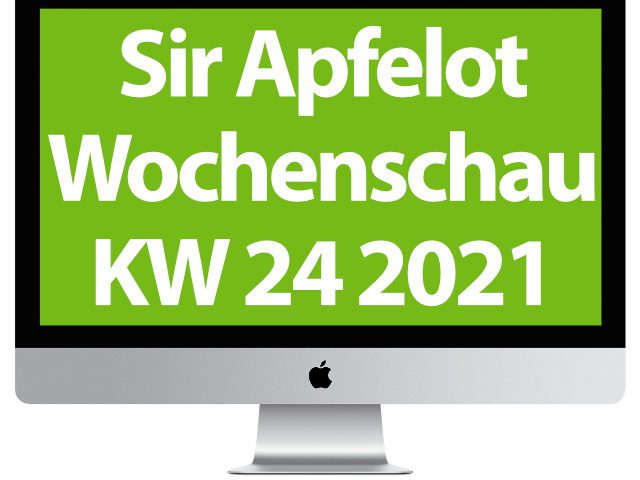 Summer is relentlessly finding its way into the local climes, which is why it is worth taking a look at Laptop coolers and fans to throw. Another look should also be devoted to the Apple and tech news that caught my eye this week. There is also the Sir Apfelot weekly news this Friday - in the edition for calendar week 24 of the year 2021. These topics include: Facebook with its own podcast function, Twitter with a new unmention function, Windows 11 is approaching macOS on, Starlink can't stand heat, the M1-iMac is crooked, new MacBook Pro models and more.

In the Sir Apfelot weekly newsreel for calendar week 24 in 2021: Facebook podcasts, new Twitter function, Windows 11, Starlink problems in the heat, FaceTime in the browser, the crooked M1-iMac, the new MacBook Pro and more.

Facebook not only wants to be a platform for like pages, but also wants to know the most important content of the makers on it. That is why an email was recently sent to podcasters. It says that you can now embed your podcast on Facebook. Further details can be found in a Entry by The Verge. Anyone who makes a podcast can feed it into Facebook via an RSS feed. The posts for newly published episodes should then be created automatically based on the RSS data. Optionally there is the possibility for listeners to create clips, i.e. to cut highlights from the podcast lasting several seconds. Details at The Verge.

Twitter is planning an "unmention" function to leave conversations

In 2020, Twitter introduced the option for tweeters to determine who can reply to their tweets - everyone, only followers, only the tagged people or nobody. Since then there have been other innovations and improved functions. There is still a dispute about whether fleets and spoken tweets are one of them. But what should be useful, according to one Entry “Unmention” function coming from 9to5Mac. This allows tagged people to remove the mention / link to their account in tweets from others. This means that others can no longer see the account and you no longer receive notifications when there is interactions with the tweet.

Windows 10 came out in 2015 and is by no means the best operating system for a computer. In addition, it is already known that support for the OS will be discontinued on October 14, 2025. So it's time for a new version of Windows. This should appear soon and, for example, in one Message from heise online there are already first insights. Accordingly, the start button and the program icons should be centered on the taskbar - similar to the macOS Dock. In addition, the corners of the program windows are rounded off. The start menu is simplified and packed into a window. The maximize button of windows is supposed to bring new functions such as pin to the left, pin to the right, etc. There is more about this and, above all, screenshots in the linked source.

Starlink and the heat - satellite internet not suitable for summer

With ever hotter summers and the first noticeable effects of the climate crisis, the Starlink satellite internet is proving to be unsuitable. The receiver devices in the form of satellite dishes only work up to a temperature of 40 ° C, which should be reached quickly, especially in direct sunlight these days. Not only here, but also towards the equator. So heise takes online at this point Reference to a message from the southern USA, more precisely from the state of Arizona. There a Starlink receiver failed at 44 ° C and had to be cooled with a water sprinkler. It is clear that this cannot be a permanent solution.

Apple is starting the subscription function for podcasts

Announced in April, postponed in May and now available: In Apple's podcast app, podcasts can now be subscribed to for a fee. So Apple is changing from the "neutral directory provider“Like the iPhone ticker here. calls for monetization, which should make the offer more lucrative. That means two things: On the one hand, you may have to pay for podcasts or for their freedom from advertising as well as for exclusive bonuses. On the other hand, third-party apps related to the Podcasts / iTunes library tend to be unable to show updates on new podcast episodes. The iPhone ticker cites as examples "Castro, Overcast or Pocket Casts".

M1 iMac with an inclined bracket

If the iMac is crooked and the image is tilted slightly to one side, there could be several reasons. On an inclined table top, on an uneven floor or on a production error in the computer itself. This seems to be the case with the current Apple iMac with an M1 chip. MacRumors, among other things, is based on this at this point a. There are several cases in which the iMac could stand crooked. The stupid thing about it: The error cannot be corrected by the user, at most if the subsurface is adjusted. But who wants to make do with a piece of cardboard under the iMac when it should be delivered balanced?

Not only will the comedy “Ted Lasso” soon get a second season on Apple tv +, but also (at least) two other successful series in the portfolio. According to MacRumors this is the case from September 17th, for example, for “The Morning Show”. I'm curious to see how the startling story continues, which is portrayed by Jennifer Aniston, Reese Witherspoon and Steve Carell, among others. But “See: Empire of the Blind” is also getting a second season. According to iFun it will be available from August 27th. Personally, I haven't looked into it yet. Have you seen the series yet? Feel free to leave a comment on it.

How does FaceTime work in the web browser?

Within the WWDC21 keynote Apple introduced new ways to use FaceTime. Video telephony, for example, is clearer with Grid View, and acoustically clearer with Spacial Audio. Multimedia content can be viewed synchronized with others via SharePlay. In the future, there will also be the option of inviting people to a conversation via FaceTime links. This also works on non-Apple devices. B. participation is made possible via the web browser from the Windows PC. 9to5Mac has tried out how and how well it works in beta versions. The report on it can be found with this link.

When can we expect the new Apple MacBook Pros?

Hardware presentations were also expected in advance for the WWDC21 keynote mentioned above, which heralded Apple's World Wide Developers Conference 2021. There weren't any, only updates to iOS 15, iPadOS 15, macOS Monterey, watchOS 8 and the like. So now there are rumors again as to when, for example, the 14-inch and 16-inch models of the MacBook Pro with M1X or M2 chip will appear. Will it be presented this summer or in autumn? Will it not be on the market until 2022? MacRumors wants to answer these and other questions with reference to numerous sources. You can read that at this point.