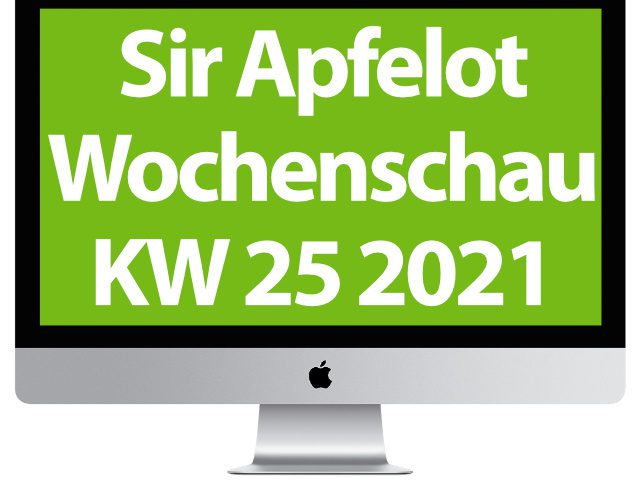 There is a lot to report at the end of the week. It's good that there is the Sir Apfelot newsreel. In this issue, I'll show you which Apple and tech news caught my eye in calendar week 25 of 2021. Among other things, these topics are included: Common surface for various streaming offers, Facebook with a clubhouse-like function, L'Oréal wants to help save water, Google with its own “Where is?” Counterpart, antitrust proceedings against tech giants from the USA, and a lot more.

Included in the Sir Apfelot Wochenschau for calendar week 25 in 2021: A surface for Netflix, Prime Video and Disney +, L'Oréal helps save water, trains and mobile communications, antitrust proceedings against Google, Facebook, Amazon and Apple, ARD-ZDF- Streaming, and more.

Screenhits TV - One interface for Netflix, Prime Video and Disney +

With Screenhits TV there will be a possibility from the end of July to be able to watch titles from Netflix, Prime Video and Disney + via just one user interface. This means that films, series and documentaries can be found and viewed more quickly without having to change the app. The offer, which was announced back in March 2020, went to Golem this week at this point a. This means that subscriptions that have already been booked can be integrated free of charge. If you book bundles on Screenhits TV, there is a discount. The app can also be used to watch television. The official website does not currently provide that much information - just a landing page where you can put yourself on a waiting list.

After the hype surrounding the “Clubhouse” app, various large social media sites and apps have tried to launch their own counterparts. For example, there have been so-called “spaces” on Twitter for some time. Like MacRumors shows, Facebook is now following suit. In the USA a feature called “Live Audio Rooms” has started. In Facebook groups, the users' options differ depending on whether it is a public or closed group. With its new features, Facebook now seems to focus more on the spoken word, there was a hint last week Podcast feature for like pages.

In professional hair salons, the “Water Saver” presented by L'Oréal is intended to ensure that water consumption when washing hair is significantly reduced. It should be possible to save around 80%. With reference to Guive Balooch, the head of the L'Oréal Technology Incubator, the Edison magazine calculates here suggest that in Germany alone this means an annual volume of 34 billion liters of water. It is assumed that 80.000 hairdressing salons use an average of up to 540.000 liters of water per year. In order to achieve the planned savings, so-called "fractionation" is used, a technology made up of rocket engines. Drops of water collide with each other, are atomized and less water is required for shampooing.

Mobile communications on the train: uninterrupted coverage probably not until 2026

A seamless mobile network from Deutsche Telekom along the Deutsche Bahn tracks, that should be the goal. But in order to achieve it, the two corporations take their time. "However, it will be a long time before you can make calls and surf the web without interruptions. According to the current planning of the two large corporations, there will be no more supply gaps along the rail routes in long-distance and regional transport until the end of 2026“, It says about in one Entry of the iPhone ticker. The article goes into the official details of the plans, including the intermediate steps for 2024 and 2025.

This Entry I also discovered the iPhone ticker. With reference to a Tweet ARD shows that the broadcasting group ARD and ZDF want to merge their media libraries into a common streaming network. This allows titles to be searched for, found and viewed across the board. In addition, recommendations for content are displayed across the board. Furthermore, mixed playlists are now possible in which individual offers from the more than 250.000 contents can be summarized. Further official information is available in a press release dated June 21.06.2021, XNUMX, which you see here can.

Is Google planning its own location network?

With “Where is?” Apple offers the possibility of locating various lost or stolen devices. This applies to Macs as well as to iPhones and AirPods or, last but not least, to the AirTags. What is possible with an iOS device should now apparently also be made possible for Android devices. "A Beta version Google Play Services for Android suggests that the smartphones [...] could be used to track down other devices“, It says, for example, in one Articles at the Macerkopf. Apparently, a network of devices working in the background is planned, as is used by Apple for “Where is?”.

Antitrust proceedings against US corporations Google, Amazon, Facebook and Apple

The Federal Cartel Office - like a few other bodies - has been taking action against Apple since this week. "The authority wants to examine Apple's cross-market significance for the competition - so there are now proceedings against all four large US digital companies“, It says in one Post the Süddeutsche Zeitung. The examinations are made possible due to "of the 10th amendment of the law against restraints of competition (GWB digitization law)". Among other things, the distortion of competition caused by monopoly positions is to be examined. Details can be found in the linked source. Meanwhile, iFun is taking the case of the European Commission against Google at this point a. We also have Apple's statement against sideloading on the iPhone shown in a post yesterday.

While it is raining antitrust proceedings on the one hand, there are also nominations for Apple films and series on the other. The streaming service Apple TV +, which has been available since the end of 2019, has received 389 award nominations so far. 112 of these were actually won prizes. That goes from a corresponding press report emerged. These numbers may be impressive, but z. B. at MacRumors they will put in relation. For example, Netflix is ​​said to have received a total of 2020 Emmy nominations in 160 alone. In the same year there were 18 of them for Apple TV +. Do you use the streaming offer from Cupertino? Feel free to leave a comment on the topic;)