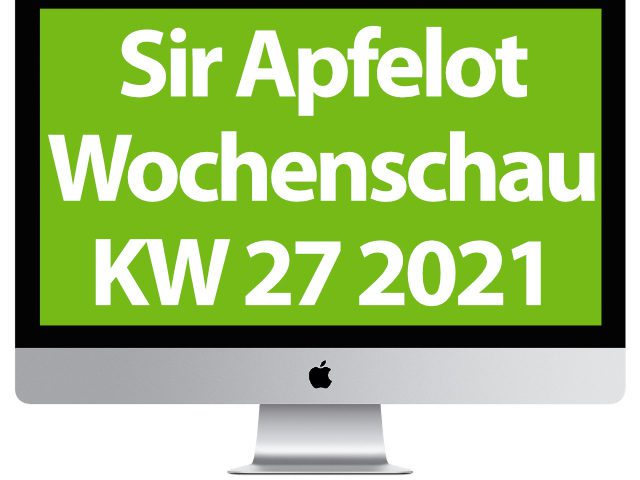 What a week! First that will Nintendo Switch OLED model announced and now there is also a Sir Apfelot newsreel. It's great that you're looking back and want to see which Apple and tech news I noticed in particular in calendar week 27 of 2021. Among other things, these messages are included: The open source scene and funk, the Muse Group and the Audacity app, 4-day week as a successful experiment, urgent messages in focus mode of iOS 15, questionable Apple video by 2014, information about the iPhone 13 and more.

In the Sir Apfelot Wochenschau for calendar week 27 in 2021 you will find the following messages: Open source radio in danger, Audacity is considered spyware, urgent messages under iOS 15, questionable Apple video from 2014, and more.

"The EU Commission is working on regulations to implement the RED radio equipment directive. Critics see Freifunk, OpenWrt and the Internet of Things under threat“, Heise directs a corresponding online Article a. However, this is not about a completely new paper, but rather questionable passages in an EU directive from 2014. New standards are to be developed for this, which make open source radio difficult or could prevent it. The abbreviation RED stands for "Radio Equipment Directive". And this says z. B. that on radio terminals only software authorized by the manufacturer should be used. You can find all details in the linked source.

Audacity: Popular audio app is now said to be spyware

The word “spyware” was used a lot this week in connection with the long-popular audio app Audacity. The free software for macOS, Windows and Linux helps record, edit and store audio content. Already a few weeks ago However, it was taken over by the Muse Group. This has now adjusted the terms and conditions and wants to collect and transfer a lot of user data. There is also one at Basic Thinking Post . There is also talk of a violation of license conditions. If you are unsure about Audacity, take a look here: Audacity Alternatives - Free and Affordable Audio Programs.

Constant or increased productivity in the 4-day week

Today I want to include a message that doesn't quite fit technology or Apple, but which still caught my eye. Because t3n reports at this point about two field trials from Iceland, where the 4-day week has been tested since 2015. With the 2.000 or 500 participants (with a total of around 200.000 inhabitants in the state), the result is a representative picture. In addition to the reduction in working hours, the work itself has also been made more efficient. Productivity remained the same or was even improved. Hopefully the concept will spread outside Iceland as well.

Thinking up your own passwords that are secure and cannot be cracked so quickly is not that easy. That is why there are various software-based mechanisms that are supposed to relieve you of this task. On Apple devices you get z. B. suggests quite secure passwords if you have to specify one somewhere. The anti-virus professional Kaspersky also has this kind of help on offer. However, as cryptography teacher Matthew Green found, the Kaspersky tool spat out comparatively simple character combinations that could be guessed in seconds using brute force. An update is now said to have helped. Source 1, Source 2.

Focus in iOS 15 - Urgent messages can be displayed

With the customizable focus modes on iOS 15 on the iPhone, you can specify which notifications can get through to you at work, during leisure time, during bedtime and so on. If you switch off all notifications or those from the Home app, then it could be that certain warnings do not get through. If a sensor detects smoke or a fire or if there is a break-in, then you should be informed about it during work or during the meditation break. This is exactly where the concept of “urgent messages” comes into play, the iPhone ticker at this point describes.

Thanks one Entry I also came across a video in the iPhone blog that raised some questions. It was thought to be the opening of Apple's World Wide Developers Conference (WWDC) in 2014. In the 10-minute video, Larry David played the role of the person who checks apps for the App Store. The whole thing was teased like a mini-episode of "Curb Your Enthusiasm," a sitcom. However, it is not only questionable how arbitrarily the test process for the apps was presented. Misogyny and racism can also be quickly identified in the video. It is logical that it was not used. But it is critical that it was even produced. You could do it until recently here see on YouTube.

Various functions for Apple Pencil input on the iPad can be used under iOS 14, for example handwriting recognition. These functions are now also available for languages ​​such as German, French, Italian, Spanish and Portuguese - this is demonstrated by MacRumors in one Post on. Handwritten entries in these languages ​​can now be copied, for example, and inserted into text fields and forms in the standard text form. MacRumors points to Apple's website for more information about the availability of iOS and iPadOS features that you with this link can call.

"Right to repair" is now also an issue in the USA

In the EU, the right to repair has long been discussed and implemented. Like MacRumors in a Entry it is now also an issue in the US under Biden. "The rules would prevent manufacturers from restricting consumers' ability to repair their products in independent repair shops or on their own, and the president's guideline is expected to mention cell phone developers as an area for possible regulation“, It means loosely translated. Not only is the paper expected in the coming days supposed to strengthen consumer rights. It is also intended to boost the business of independent workshops.

With reference to statements from the supply chain is it [called at 9to5Mac that the upcoming iPhone series will definitely have the number 13 in its name. Recently there have been rumors to the contrary, as the 13 is considered an unlucky number in some countries, which can certainly be viewed as important sales markets for Apple. That is why it was rumored that the iPhone 2021S might appear in the fall of 12. In addition, the linked source is about the time of the presentation of the new iPhones and their market entry. It is likely that they will be presented in September but will not be sold until later.