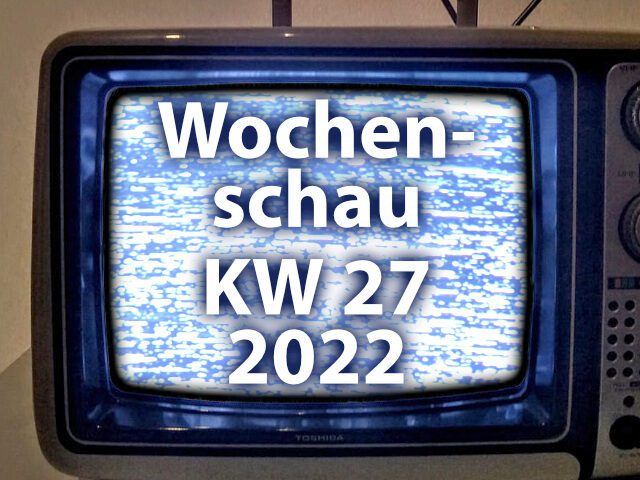 Oops, it's Friday again. Time for the latest issue of Sir Apfelot Newsreel. This time I'll show you which Apple and tech news I particularly noticed in calendar week 27 of 2022. Among other things, these reports are included: Netflix now with 3D audio, Signal does not want to be exchanged with other messenger apps, new Apple systems with a special "blocking mode", rumors about a special Apple Watch and Pro chips for the iPhone, apparently three models of the Mac Studio to come, and more.

In the Sir Apfelot newsreel for calendar week 27 of the year 2022 you will find, among other things, reports of this type: Netflix with 3D audio, signal against the messenger interoperability planned by the EU, blocking mode on Apple devices, new chip plan for iPhones and more !

"Netflix uses Sennheiser's AMBEO technology to add an immersive surround sound experience to stereo audio", it says in a short Message from Netflix, which went live this week. The virtual surround experience will be rolled out to all devices compatible with the streaming service and to all subscription models. Access to the new feature should be extremely easy for users: "If you don't have surround sound speakers, playing a compatible title with stereo audio will automatically turn on 3D audio“, it says, while users with a surround sound system can choose between 5.1 surround sound or Dolby Atmos is recommended.

Signal is a messenger App, which can be used on iPhone, iPad, Mac and Android devices. Users are promised a secure exchange with a lot of privacy. That is why the makers of Signal see the current plans of the EU, which provide for a cross-app exchange, as a threat to data security. The so-called interoperability of messenger apps would at least mean that messages from services considered secure (Signal, Threema, Telegram) could also go to WhatsApp and the Facebook Messenger of the meta group - and without the usual encryption. iFun has details on this in a Entry collected.

Amazon under the magnifying glass: five years of abuse control by the Federal Cartel Office

After a thorough examination, the Amazon group and its observation by the Federal Cartel Office have now beentightened rules“ fixed. That divides the office into one Entry With. "When it comes to marketplace services for commercial retailers in Germany, Amazon has a sales-related market share of over 70 percent and is therefore dominant in the opinion of the Federal Cartel Office"It says, among other things. For this reason, special abuse control is now being enforced for the five-year observation period. This is intended to show whether and when Amazon uses its dominant position to the detriment of others.

During Safety Check intended to help private users to evade persecution by acquaintances and partners, an even newer function in Apple systems is spying. As well in iOS 16 and iPadOS 16 as well as in macOS Ventura, the lockdown mode or blocking mode is to be introduced, as current beta versions show. i.a. iTopNews shows in a Articles that this is a feature for activists, journalists, politically persecuted persons, etc. Anyone threatened or affected by institutional espionage can use it to limit device usage and stop data leakage. The individual effects, which are to be expanded in the future, can be found in the linked source. Anyone who discovers a vulnerability in blocking mode will receive up to $2 million.

The clown fish are back: new backgrounds in the latest iOS 16 beta

Fortunately, most users will never have to use the lockdown mode of the iPhone, iPad or Mac. But what always pleases many are new – or old – wallpapers for Apple devices. Some of you may remember the picture with the two clown fish from the first iPhone. Like the iPhone ticker in one Entry with reference to a corresponding tweet, this iPhone background has appeared again in iOS 16 Beta 3 with an optimized resolution. However, it only seems to show up on younger iPhone models, not older ones smartphones compatible with iOS 16.

This autumn, in addition to the regular Apple Watch Series 8, an SE version and, for the first time, a model for extreme athletes are to be launched on the market. This "rugged" model is said to be even more stable than the other Apple Watches (although Apple is only just coming up with a new one commercial emphasized the longevity of the Series 7) and also bring a larger display. I also have that in one this week Post read from the iPhone ticker. The source given is Mark Gurman from Bloomberg, who also said that the larger extreme sports version of the Apple Watch should have a longer runtime thanks to a larger battery.

In the new iOS 16 beta for developers, achievements and awards for achieved goals in Apple Fitness+ have appeared. This shows, among other things, MacRumors in one Post . The new awards are independent of the previous awards, which e.g. B. for completed fitness rings be distributed. Rather, they refer to the completion of workouts that are offered in the Fitness+ subscription. This should probably motivate more people to subscribe and also keep them in the same place.

Long-term concept: Latest A chips only for Pro models

In addition, MacRumors picked up the rumor again this week, according to which the new A chips, i.e. the SoC versions for iPhones and other small devices from Apple, should only appear in the Pro versions of smartphone generations. In which Post is made with reference to various sources, including Ming-Chi Kuo, claims that starting this year, and thus starting with the iPhone 14, the standard versions will use the previous year's Pro chip, while the Pro and Pro Max editions will get the newly developed one. Accordingly, the chip distribution should look like this in the future:

The Mac Studio is currently the most powerful computer from Apple ahead of the Mac Pro with the M chip, which is still expected. The design of the professional computer is based on the Mac Mini and its current equipment (Max M1 or M1 Ultra) but won't be sold for much longer. At least I have that in one Entry read by iTopNews. Referring to the developer Pierre Blazquez, it is reported that the hardware identifiers Mac14,5, Mac14,6 and Mac14,8 were discovered in a code. From these it should be clear that the Mac Studio will come in three new versions on the market. However, these are not expected until 2023 at the earliest.