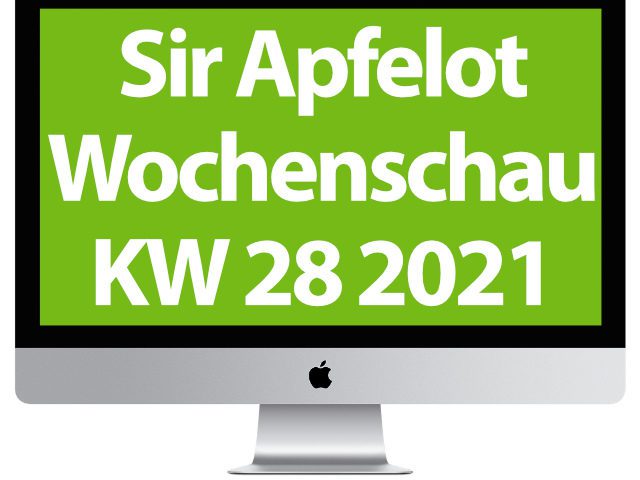 Again a lot has happened, again there is new news. That's why I have a Sir Apfelot newsreel ready for you again this Friday. This time I'll show you which Apple and tech news caught my eye in calendar week 28 of the year 2021. Among other things, the following messages are included: Twitter is pounding in Fleets and making response options customizable, the federal autobahn app is coming, the Federal Network Agency is releasing 6 GHz frequencies, Google Drive as a desktop app, Netflix wants to offer video games, hackers use it iOS vulnerability, and a lot more ...

In many social media apps there is the option to upload stories or videos with other names, which are displayed in a separate area and then disappear again after a certain period of time. Twitter had done something like this with the so-called “fleets”, which disappear after 24 hours. They should stimulate interaction between users. That didn't seem to work out as well as The Verge now shows. According to the report, fleets are to be crushed on August 3, 2021. Spaces, i.e. live voice chats that are supposed to be a clubhouse counterpart, will remain.

While fleets were certainly a nice pastime for many users (but not much more besides), Twitter is now making a much more sensible change: For tweets that have already been sent, you can now set who can reply to them. If you no longer want everyone to be able to write a comment on Twitter, but only followers or accounts mentioned in the tweet, you no longer have to delete the tweet and consider the correct setting when rewriting it. Practically! ( )

Let's move on to another app in which video content is the main content. Like MacRumors at this point shows, TikTok has now managed to break the 3 billion downloads mark. This is amazing in that only apps from Facebook were able to do this before, i.e. Facebook, Messenger, Instagram and WhatsApp. In the linked source, TikTok's individual growth and download figures are shown. There, as well as the sales figures, are about millions. The values ​​are also compared with other apps or categories. Because TikTok and Facebook apps are not games that come up with the numbers mentioned much more easily.

Official app from the Autobahn GmbH of the federal government

Meanwhile, the iPhone ticker indicates the release of the official federal motorway app on July 20, 2021 with a Entry down. "On Tuesday, the Autobahn GmbH of the federal government will present an official Autobahn app and publish it for use on the iPhone and Google's Android operating system“, It says among other things. The functions should include route planning, route information, display of e-charging stations and information on truck parking spaces. Reports on construction sites on the motorway (and hopefully also closures) should also be part of the offer. The official presentation is planned for an event in Cologne.

There is also a small one Articles at iFun. There it is shown that the range from 5,945 to 6,425 GHz can be used for wireless networks in the future, e.g. B. to secure the supply in densely populated areas. In addition to companies and other institutions, private users should also benefit from this. "In addition, the general allocation allows technologies such as Wi-Fi 6E to be used with wider channels", is it [called. As a source is shown among other things the official PDF document on the topic, which comprises three pages and explains the technical and legal details.

Google Drive for the desktop on macOS and Windows

A few days ago, Google launched its official blog showed that there will be a desktop app for the “Drive” cloud service. "While many people access Google Drive directly from their web browser or mobile apps, some people prefer to access their files and photos right on their desktop, just like files stored locally on your device“, It says in the introduction (translated). "Drive for Desktop", as the app will be called, is planned for macOS and Windows. Not bad because like that mounting Google Drive as a virtual drive for display in Finder or Explorer is omitted.

Netflix and Video Games - A Competition for Apple Arcade?

"Netflix subscription should provide access to games“Golem headlined this week about one Entry. As an indication, it is cited that Mike Verdu, who co-founded Legend Entertainment Studio in 1989, has been hired as Vice President of Game Development. He's also worked at EA and Oculus, which is even more telling. With reference to Bloomberg (here.) it is also noted that from 2022 "Access to games will also be included in the subscription". Long-established gaming providers such as Steam, Microsoft and Co. will certainly not be able to hold a candle to Netflix, but there may be serious competition for the Apple Arcade game subscription.

ArsTechnica (here.) and 9to5Mac (here.). As it says in the first source directly at the beginning, this was exploited, among other things, in LinkedIn messages to "government officials". It contained a link that, when clicked or tapped, led to the installation of malware. The vulnerability, which is named by Google among others as CVE-2021-1879 ( ), is in Safaris WebKit. Both Google and ArsTechnica also deal with other zero-day exploits that can be found in Chrome and Internet Explorer.

The MacRumors site has once again lived up to its name and has responded to a few rumors and news about upcoming Apple devices. So will here. agreed that the new MacBook Pro models with 14- and 16-inch displays should have a FaceTime camera with Full HD resolution. Instead of 720p, there could soon be MacBook webcams with 1080p.

In another Articles it's about the expected iPad mini 6. This should come out in the fall of this year, as Mark Gurman from Bloomberg says. The tablet should have a display with 8,4 inches (21,34 cm) diagonal and show the largest redesign of the series to date. The edges around the display should be much narrower, which could mean a more or less constant housing for a larger display. Of course, a noticeable increase in performance is also expected.

In the third Entry, which I introduce to you, there is again information from Mark Gurman. According to him, Apple is said to be working on an iMac with a 27-inch screen. This is supposed to replace the current 27-inch model with an Intel processor. Because the will probably be installed M1X or M2 chip from Apple. When the new iMac with Apple Silicon and a larger screen will be on the market, this information is still pending. However, it should be ready by the end of 2022 at the latest, because last year Apple spoke of a two-year transition phase for all Macs from Intel to Apple chips.