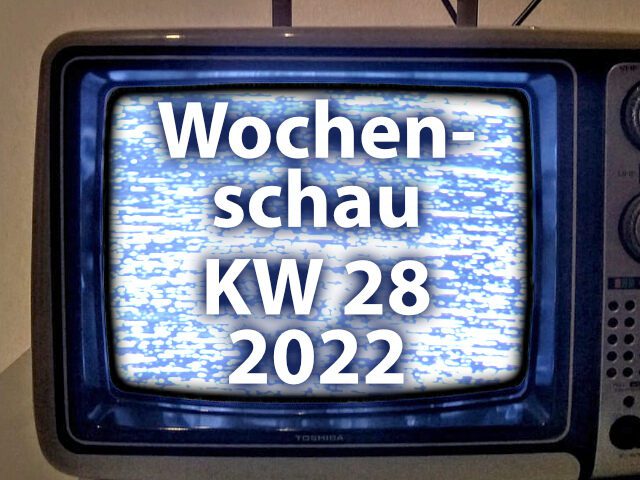 With the announced delay, but at least you get the Sir Apfelot newsreel for calendar week 28 of the year 2022 this Sunday. It contains the Apple and tech news that I particularly noticed during the week. There are not too many different sources in the following, I wasn't on many pages due to a few vacation days. The following reports are included: public beta for new Apple systems, HomePod with annoying error, gigabit strategy of the federal government, classified ads without eBay, Netflix cooperates with Microsoft, Apple with 52 Emmy nominations and more.

In the Sir Apfelot newsreel for calendar week 28 of 2022 you will find the following reports, among others: Apple publishes public operating system betas, HomePod is annoying with a login error, the German government publishes a gigabit strategy, classified ads without eBay, iPhone 15 Pro with a periscope camera, Mixed Reality Headset from 2023, Netflix cooperates with Microsoft, and some more!

After my Beta versions for developers, the first of which were already available for WWDC22 in early June, there are now also public test versions of the new Apple operating systems. With this link takes you to the Apple Beta Software program. There you can register as a tester and then access these systems, which will be publicly rolled out in revised form in autumn 2022: iOS 16, iPadOS 16, macOS Ventura, tvOS 16, watchOS 9, HomePod software 16. On the linked page you will find more information about the program, the frequently asked questions (FAQ) and other information.

Apple describes its devices as "vintage" if they have not been sold for five to seven years. This not only results in the name shown, but also an end to hardware support from the iPhone manufacturer. Since the first MacBook models with Touch Bar appeared six years ago, they have now entered the vintage realm. You can still get repairs or part replacements if the appropriate parts are in stock at the nearest Apple Store, but it can no longer be guaranteed. If the products are classified as "obsolete", then the software support also ends. More details on the current vintage listings can be found here at iFun.

No solution, but at least the public one Notice A problem apparently affecting several users also occurred at iFun this week. This includes the HomePod and the HomePod mini. For this there are some in the home App (e.g. on the iPhone) that the iCloud account password should be updated. After logging in again with the iCloud data, everything is quiet at first, but the prompt reappears later. Then some functions will no longer work. Resetting the HomePod does nothing to fix the error. Apple hasn't come up with a solution yet.

Adopted and available as a PDF: the federal government's gigabit strategy

On 61 pages you can see the The federal government's gigabit strategy view as a PDF, which comes with a foreword by Dr. Volker Wissing, the Federal Minister for Digital Affairs and Transport, as well as a clear table of contents. The aim of the strategy is for more and more fiber optics to be expanded in Germany in order to get away from the slower copper lines. By 2025, every second household should be able to benefit from fiber optics and the fast data rates it enables. The expansion is to be accelerated, among other things, through simpler permits and through alternative laying techniques. In addition, the cooperation between the necessary companies, the federal states and the municipalities should be supported.

Did you know that "eBay classifieds" is no longer part of eBay since last year? The sales and auction platform sold the entire eBay Classifieds Group in 2021 and sold it to Adevinta from Norway. In addition to eBay classifieds, the group also has other trading platforms - including Marktplaats from the Netherlands, mobile.de from Germany, Gumtree from Australia and South Africa, Kijiji from Italy and many more. so berichtet including the iPhone ticker that by 2024 on eBay classifieds the name suffix "eBay" should be deleted. In addition, the “Pay Safely” function should be able to be used even better, namely for a “Buy Now” option that does not require a chat before making a purchase.

With the iPhone 15 Pro, Apple is expected to switch to a periscope camera for multi-stage telephoto zoom in 2023. That berichtet also the iPhone ticker. Reference is made to the often correct Apple analysts Ming-Chi Kuo. You can read in the linked source how a multi-stage telephoto lens can be implemented in a smartphone without increasing the device strength too much and why Apple will definitely implement this technology at some point.

Jony Ive was once Apple's chief designer after providing the design idea for the 1998 iMac, as shown in the movie jOBS. However, after he left Apple in 2019 to work at his own design company, the collaboration with the iPhone maker continued. But this should also end now, what about MacRumors here. reported with reference to The New York Times. One reason the collaboration isn't going ahead is that it limits Ive's work at his LoveFrom company. Because they were not allowed to work on projects that might represent Apple competition.

Also at MacRumors I have one this week Post read, in which Apple's highly anticipated headset for virtual reality (VR) and augmented reality (AR) was discussed again. The first version of the mixed reality headset is scheduled to be launched in 2023. A lighter version with several additional functions will then be presented in 2024. The advanced features of this model are said to include the use of Ultra HD cameras and the ability to make calls.

Cheaper Netflix subscription: Ads managed by Microsoft instead of your own department

It has been clear since April that Netflix wants to offer a cheaper subscription than the existing ones, which is partly financed by advertising. However, neither the technology for importing the commercials nor the sales business for the advertising area are taken over by a separate department. The whole advertising business became like Netflix in a short Message indicates outsourced to Microsoft. The sentence "It's very early days and we have much to work through.“Indicates that the new Netflix low-cost subscription will still be a long time coming.

While we're on the subject of streaming, let's end with one press release by Apple. In this you will find the details of the current nominations for the Emmy Award. Series like "Ted Lasso" and "Severance" are among the nominees. According to the announcement, 13 productions from Apple tv+ have been nominated for Emmy Awards, placing in different categories of the same title for a total of 52 opportunities for an award. Other nominated productions include "Schmigadoon!", "The Morning Show", "The Trouble With Jon Stewart", "Central Park", "Pachinko", "Foundation", "Lisey's Story", "See - Realm of the Blind", "They Call Me Magic" and "Carpool Karaoke: The Series". All details and categories can be found in the linked source.