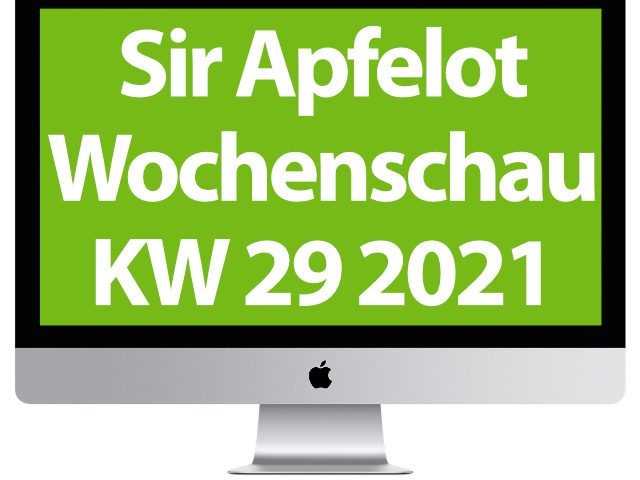 The year progresses incessantly and a number of things have happened this week as well. In the Sir Apfelot newsreel for calendar week 29 in 2021, I'll show you which Apple and tech news have caught my eye in the last few days. Among other things, the following topics are included: Money laundering with Bitcoin should be prevented, disaster warnings should come via SMS, Dropbox with a great update for free accounts, a controversial adaptation on Twitter, information about the video games offered by Netflix, production of the Apple AirPods 3 , something about the new MacBook Pro, and more.

In the Sir Apfelot Wochenschau for calendar week 29 of 2021 you will find the following topics: disaster warnings via SMS, Dropbox with an update for free accounts, controversial adaptation on Twitter, information on the video games range from Netflix, production of the Apple AirPods 3, information on new MacBook Pro, and more.

Bitcoin tracking in the EU as protection against money laundering

If the EU Commission has its way, wallets for cryptocurrencies should no longer be able to be managed anonymously in the future. "The EU Commission presented a whole bunch of legislative proposals on Tuesday to strengthen the fight against money laundering and terrorist financing“, It says in one Entry from heise online. In addition to Bitcoin, other digital currencies such as Ripple or Ethereum are also being targeted. As you can read in the linked source, there are already some guidelines and the so-called due diligence for crypto exchange portals and similar service providers. In addition to crypto, the report also deals with cash and the planned cash limit of 10.000 euros.

With "cell broadcasting" an SMS is sent to all possible recipients within a certain radio cell. This technology is much easier to use than sending push notifications, as these can also require a specific app. If, for example, a warning is to be issued via the NINA app, it must first be installed on the iPhone or Android device. You must also have mobile data or a WiFi connection. As a solution to the disaster warning, which recently did not work properly with the floods and floods in the republic, SMS should now come into focus again, shows the iPhone ticker, among other things here .

Like a golem in one Post shows, three automatically operating robots collided in an Ocado warehouse. Then a fire broke out. This was kept in check by the sprinkler system, and the fire brigade also intervened. Ocado operates cold stores for food that are managed fully automatically by robots. The current accident has probably led to delivery delays. But still better than 2019 when an Ocado warehouse burned down completely. According to Golem, the respective accidents are based on the fact that the robots approach each other and evasive action is only realized at the last moment. If the distance tolerances are incorrect, this digital test of courage can lead to accidents.

Upload of camera content: Now possible for all Dropbox users

You can now load camera content, i.e. photos and videos, into the Dropbox cloud much more conveniently and quickly. This also applies to everyone who only has one free basic account. If a premium account was previously required, camera uploads can now also be implemented for lukewarm. The iPhone ticker shows that with a Post on. It also indicates the latest update for the Dropbox password manager.

DuckDuckGo is not just a search engine that does not collect user data during the search. There is also a DuckDuckGo Privacy Browser for the iPhone, which is said to offer more anonymous surfing than traditional web browsers for iOS. Now a new feature has been announced, including MacRumors shows. A DuckDuckGo e-mail address can now be used to register with online services and set up accounts or order newsletters - similar to "Login with Apple". This is to prevent mail tracking. Further details on the @ duck.com addresses can be found in the linked source.

Twitter is once again trying out new functions for news on its platform. Instead of hearts that you can give as a “fav” for tweets you like, there should now be up and down votes. Similar to Facebook or in some forums, posts can be rated with a "thumbs up" or a "thumbs down". Among other things, this will be done at The Verge with a contribution and corresponding screenshots conveyed. The tweets and comments I've read about it so far haven't shown any enthusiasm for this feature. Not only because this could worsen the climate in some bubbles, but also because one or the other (constructed) Shitstorm is practically inevitable.

Message from KW28: Twitter is stomping on the fleet function

Matter on Amazon: Echo devices are to be calibrated to the new smart home standard

For Echo devices from Amazon, the smart home standard "Matter" is to be rolled out in the future, reports iFun in one Post . Matter, we have that already explained at this point, is a manufacturer-independent standard for smart home devices that is supported by Apple, Amazon, Google and many other industry giants, among others. However, not all Echo devices seem to get the update, just "most" of them. Some older models are likely to be dropped.

Video games at Netflix: There should be no extra costs for subscribers

It has been rumored for some time that Netflix should work on its own video game subscription. This is already seen by some as direct competition to Apple Arcade, the video games range of the iPhone manufacturer from Cupertino. Now 9to5Mac shows in one Articles that the gaming offer should come at no additional cost for subscribers to film and series streaming. You are referring to one Articles at The Verge. Both sources state that the game service should first be found on mobile devices.

Jeff Bezos was in space

Not only Amazon is a company owned by Jeff Bezos. He has also built up a space tourism company with Blue Origin. The first flight with people on board took place this week, Bezos was also there. If anyone cares: here a message from heise online.

Mass production of the Apple AirPods 3 from August 2021?

With reference to a new report from Nikkei Asia, MacRumors gets up to date rumoredthat mass production of the Apple AirPods 3 should start in the coming month. This is to ensure that the new generation of headphones with the iPhone 13 and the new MacBook Pro models can come onto the market. One disagrees as to when exactly the idea and the launch should be realized. Maybe in conjunction with the iPhone 13 in September or October? Or maybe together with other products? It remains exciting!

Here, too, I carefully put a question mark next to the heading. The rumor comes from one Articles by 9to5Mac and refers to Mark Gurman of Bloomberg. His newsletter was once again about new models of the Apple MacBook Pro laptop. The 14- and 16-inch versions with M1, M1X or M2 chips are eagerly awaited. According to current information, they should come with a miniLED display and be presented this year. The period is very broad and is given as September to November, i.e. the same period that Apple used last year to present the new devices. Here, too, we can look forward to the exact procedure this year.