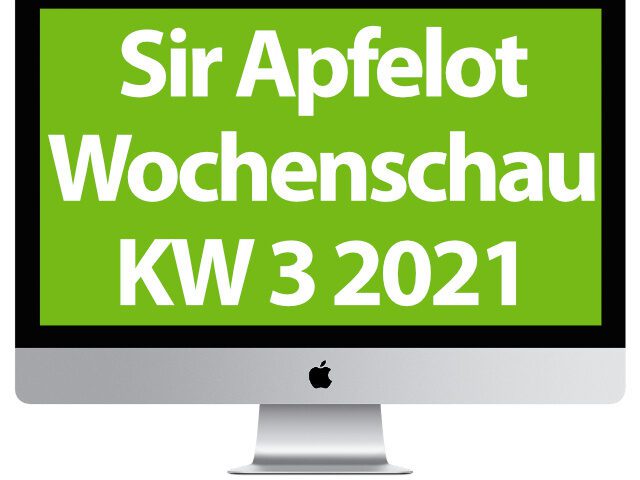 And it's Friday again. So it is time for a new edition of the Sir Apfelot newsreel. This time I'll show you which Apple and tech news I noticed in calendar week 3 of the year 2021. The following topics are included: New guidelines for Twitter verification, a new function for using Netflix, the screen saver problem of the new M1 Macs, increased playtime on Steam and much more. Which topic are you most concerned with? Feel free to leave a comment;)

The blue tick: This is how Twitter verification works in 2021

If you are on Twitter and can call yourself a "greeting user", you can not only fall back on a large community for exchange and feedback. Such users also run the risk of being hacked or copied. So that this is not so easy, there is the verification, which is visible in the form of a tick symbol next to the user name. Since 2017, Twitter account verification has been more or less discontinued; however, there have been new guidelines since the beginning of 2021. You can find all the details here. at basic thinking. There it is shown which criteria are observed and which exceptions there can be.

Will Signal replace WhatsApp? The boss says no.

Brian Acton not only co-founded WhatsApp, but is now also the boss of the Signal messenger service. As part of the current user migration, away from WhatsApp and towards other chat apps, he can well estimate where the journey is headed. According to one Articles Acton sees no reason from t3n to assume that Signal will be the new WhatsApp. This is not only due to people getting used to WhatsApp, but also to the different functionality of the apps. You can find details on this in the linked source. The WhatsApp alternatives Signal, Telegram and Threema I introduced you here.

"Network agency takes 21 million unsafe electronic devices from the market", headlines WinFuture at this point. The article is about the Federal Network Agency and its efforts to keep cheap products that do not meet European requirements and standards away from consumers. The president of the agency, Jochen Homann, is also quoted: “Large quantities of unsafe products continue to reach the German market via the Internet […] If the price is very low, consumers should look twice. [...] Very cheap products often do not meet European safety standards. "

Netflix does not want you to scroll your way through the library of numerous contents for minutes, but rather that you consume. This is not only reflected in efforts to appeal more to the smartphone audience through close-ups and close-ups in newer productions. Anyone who uses Netflix on TV could currently stumble across the new "Shuffle" feature. If you select this, then a popular content that matches the films and series that have been consumed so far is played. MacRumors points this out in a Entry down. So if you are not sure what to watch, you can simply put something in front of you.

Video games and everything that has to do with them make a lucrative and attractive market for investors. This does not only apply to individuals as well as small and medium-sized companies. Corporations such as Sony, Microsoft, Amazon and Google are also currently looking for developer studios that they can buy up. At least one points to that Articles at PCGames. There reference is made to Brad Sams, who is said to have been right in the past with corresponding hints. CD Projekt RED is named as a studio that may be bought. The Witcher makers currently have to nibble on their "Cyberpunk 2077" debacle.

In the past year, Sea Pixelcritics, players played around 31,3 billion hours via the Valve service “Steam”. This means that users invested around 2019% more time in video games compared to 50. In addition, the client for downloading, updating and running video games and other software saw a strong increase in accounts in the Corona year 2020. "Every month, an average of 2,6 million people bought a game on the platform for the first time," it says. But not only content for monitors was struck, noticeably more VR content is also said to have been consumed. The new year should mark the market entry in China.

It is a strange but not incomprehensible bug that currently seems to plague Apple computers with the M1 chip. Like it among other things golem describes, report z. B. Users in the MacRumors forum that the error occurs on computers on which there are several user accounts. One solution seems to be to switch off so-called "Fast User Switching". On the MacBook Pro and MacBook Air, it can also help to open and close the device. In my opinion, it is conceivable that the screen saver that suddenly appears is intended for the other user account that is currently not being used and therefore does not disappear when entries are made because they are not registered for the inactive account. That should go away with an update.

Should Telegram be phased out of the App Store?

"Apple is facing a lawsuit Telegram opposite to. Users want to get the Messenger removed from the App Store,” says one of the opening statements Post from Netzwelt. The lawsuit does not come from Germany, where Telegram is used extensively by and for believers in conspiracies as well as self-proclaimed "lateral thinkers". But from the "Coalition for a Safer Web" from the USA. The latter also warned against the spread of hatred and agitation, which takes place via Telegram. Especially after the storm on the Capitol in Washington DC there are corresponding demands after some corporations have already cut the resources for the Parler app.

"Portraits, cities, night skies and more" is presented by Apple in a current issue press release. The photos presented come from iPhone users who took their works of art with an iPhone 12 model. In addition to the pictures, under each of which you can find which model was used by whom in which place, there is also a small body of text. This indicates the progressiveness of the camera system in the current Apple smartphones. If you want to have a look at the "Shot on iPhone 12" photos, then click on the linked page;)