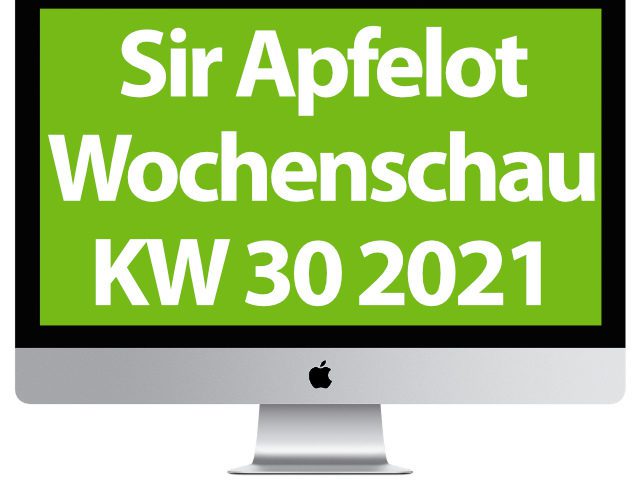 And already it's Friday again, of course again with the well-known Sir Apfelot newsreel. This time there is a smaller issue because I am in the middle of preparing to move. Nevertheless, I noticed a few articles on Apple and tech topics in the last few days. I don't want to withhold this from you. The news from calendar week 30 in 2021 include: Muse Group apologizes for Audacity terms and conditions, AUKEY sneaks back on Amazon, new iPad mini is planned, Pokémon is to get a live-action series, and more .

Note: I had planned the post yesterday and accidentally published it. Sorry if there was any confusion about this 😅

Included in the Sir Apfelot Wochenschau for calendar week 30 in 2021: Muse Group adjusts Audacity terms and conditions, iPad mini 2021 should appear in autumn, live-action Pokémon on Netflix and more.

Like iFun in one Post reported, the indignation of Audacity users about the updated terms and conditions and data protection information, which were issued by the new owner Muse Group, seems to have had an effect. Because some passages have been adjusted so that the age of use is no longer at least 14 and that it is also clear that usage data is not saved across the board. As it is rightly called at iFun, however, a bitter aftertaste remains. If you are not sure whether you want to continue using Audacity or want to use it again, you can look around here in the blog for alternatives: Audacity Alternatives - Free and Affordable Audio Programs.

AUKEY does not want to part with Amazon

In May, the technology and accessories manufacturer AUKEY flew most (or now all) of its items from Amazon - we have reported about it here. Amazon justified this with fake reviews of the products. Shortly afterwards, however, the first AUKEY products from other retailers and some with other brand names appeared as new offers. That seems to continue now, like golem shows. "Aukey products can still be found on Amazon via third-party providers and under a new name - sometimes even with Aukey lettering“, It says in the introduction. The article addresses The Verge and Notebookcheck as sources that have identified AUKEY and Key Series products as such.

Notes on an Apple iPad mini for fall 2021

After the iPhone 13, a new iPad mini with an 8,3 inch display is due to hit the market this fall. This is what Netzwelt is about, among other things at this point on. The information is said to come from the analyst Ross Young. Incidentally, you get the larger display (diagonal of 21,08 cm) with the same housing, because the new iPad mini 2021 should no longer have a home button. "According to the inside information, the processor used is the A14 or A15 chip developed by Apple. On the connection side, the change from Lightning to USB-C should be pending“, It says about the other technical data. We're excited to see what's in store for us in autumn.

"Apple today announced financial results for the third quarter of fiscal 2021, which ended June 26, 2021. The company posted record sales of $ 81,4 billion for a quarterly June, up 36 percent year-over-year, and earnings per diluted share of $ 1,30 for the quarter“, It says in the Official press release on the subject. You can also download the consolidated financial statements as a PDF using the link provided. Interesting details, e.g. B. the Handelsblatt mentioned: The Chinese market is a growth driver for Apple, and three quarters of Apple Watch buyers are new customers to the company's smartwatch segment.

With reference to a Post Various media reports on variety, too German-speakingthat Netflix is ​​arguably in the early stages of a live-action series on Pokémon. Similar to the film "Master Detective Pikachu", real film sequences are to come together with computer-animated pocket monsters. "The project is still in its infancy, so there are no details about the plot yet. However, Joe Henderson was won over as a writer and executive producer. Henderson is currently co-showrunner and executive producer on the Netflix series Lucifer, which is entering its sixth and final season“, It says in summary at JPGames.