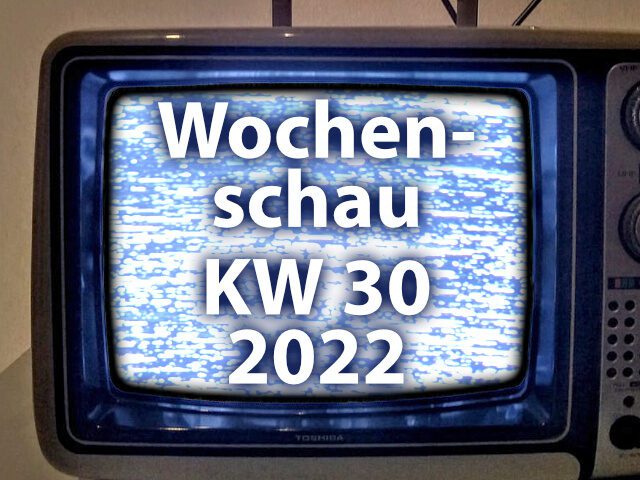 Well, are you also planning to get together for this weekend stock up on cheap indie games? Then wait a moment and take a look at today's Sir Apfelot newsreel! Because today I'm going to show you again which Apple and tech news I've particularly noticed in the past few days. The reports for calendar week 30 of 2022 include the following: Amazon Prime is becoming more expensive, Firefox with an extensive update of the Mac version, new information about always-on display on the iPhone 14 Pro, look around function in Apple Maps now also rolled out in this country, reference to the new iMac Pro and similar Apple computers, and more.

In the Sir Apfelot newsreel for calendar week 30 of the year 2022 you can expect details on the following reports, among other things: price increase at Amazon Prime, Firefox with a major function update, reference to the always-on display of the iPhone 14 Pro, look around function in Apple Maps, Apple's new earnings results, and more.

With Amazon Prime, a subscription includes several contents and services: free express delivery, music streaming, films and series as well as a few other advantages. But Amazon now wants to be better paid for it. Instead of the previous costs of EUR 7,99 per month or EUR 69 per year, it will be EUR 8,99 per month or EUR 89,99 per year. This change occurs as iFun in a Entry points out, effective September 15, 2022. The linked source also quotes the reason for the price increase that was already shown in June: "We are making this change in light of general and significant cost changes due to inflation [...]".

Echo devices with a display should advertise so-called skills

So-called skills can ensure the quick execution of combined commands and actions on Echo devices. You don't have to put them all together yourself, but can also use ready-made skills - for example from developers. But you have to find them first. To make this work better (and allow Amazon to get even more money out of Echo devices), developers will soon be able to advertise their free skills for a certain amount. A corresponding banner then appears on the users' Echo devices. In a Entry on the subject, iFun draws a comparison to app advertising in Apple's App Store.

There is a wide variety Web browser for macOS, and one of them is Mozilla's Firefox. For this there was recently the update to version 103, which not only brings small fixes and adjustments with it, but also larger functional extensions. Like me this week in a Post of the iFun blog, the following advantages result from the update: better performance, especially with high CPU load, better display on 120 Hz displays, more control options in the picture-in-picture display of videos as well as new ones Keyboard shortcuts for quick access to specific functions. The official release notes for Firefox 103 Is there ... here.

Developer beta: Always-on display as an option in iOS 16

In iFun's sister blog, namely the iPhone ticker, I also found a few interesting messages this week. The first, which I want to present to you here, revolves around iOS 16 and the iPhone 14 Pro. The fact that an always-on option for the display should be found on the device expected for autumn 2022 is now confirmed by the current Beta version underpinned by iOS 16 for developers. Referring to one entry in the blog 9to5Mac the "sleep" version of a wallpaper is shown, which is a darkened and monochrome version of an actually bright and colorful wallpaper. The darker, less colorful version, combined with a lower refresh rate (e.g. 1 Hz), could benefit a permanently on display without too much battery drain.

Look around in Apple maps: "Look Around" is now also available in Germany

In two reports on the same day (here. and here.) reported the iPhone ticker about the change that was rolled out by Apple this week for the in-house map and navigation app. On the iPhone, among other things, you can now use the look around function to take the first-person perspective on the map that you are used to from street view in Google Maps. To find the function it says: "To activate the photographic view in Apple's Maps app, you have to zoom in on the map view until the small binoculars appear. In the iOS version of Apple Maps the symbol appears in the lower left and on the Mac the binoculars are located in the upper right with the other controls of the app."

Apple probably had three iMac (Pro) versions in the pipeline

In einem Post MacRumors this week addressed an Apple leak that contained iMac prototypes that Apple had examined last year. The information comes from MacRumors forums user "Amethyst" who earned a leap of faith by providing information about the Mac Studio ahead of its official reveal. A total of three iMac models with Apple Silicon (M1 and M1 Max) are said to have been tested by Apple, but not put into mass production:

Recommended reading: Gurman: Next Mac Pro could have an "M2 Extreme" chip

Apple is opening a new development site in Jerusalem, MacRumors reported in another this week Post . With reference to Elad Wertheimer, who is responsible for the talent search for the "Apple Silicon" development at Apple, it is also reported that the necessary engineers are currently being sought. As will be further shown, Apple already has two research centers in Israel, one in Herzliya and one in Haifa. All in all, various components for Apple devices are being developed in Israel: wireless communication of the Apple Watch, previous M1 versions (Pro and Max), etc. Further details can be found in the linked source.

Thanks to ActivityKit: "Live Activities" for the lock screen of iOS 16

In order to monitor processes or events updated with live data, one must ab iOS 16 not even unlock the iPhone anymore. This is made possible by Apple's ActivityKit, which is now available to developers as a beta. It can also be used for iPadOS 16 on the iPad. As an example of usage, MacRumors shows in a Post on the arrival of an Uber vehicle. The lock screen shows the driver, vehicle (image and details as text), time remaining to arrival and a timeline. However, the Live Activities can also be used for delivery services, mail deliveries, sports scores and more. Here I had briefly touched on that before; full details are available on the Apple developer page.

Incidentally, Apple today announced its results for the third quarter of the company's year (which begins earlier than the calendar year for the iPhone manufacturer). Things went well again and there is hardly any sign of a crisis in the numbers. "This quarter's record results speak to Apple's continued commitment to innovate, drive new possibilities, and enrich the lives of our customers' said Tim Cook, Apple's CEO. You can find a press release with further statements and all processed figures in a PDF file with this link.