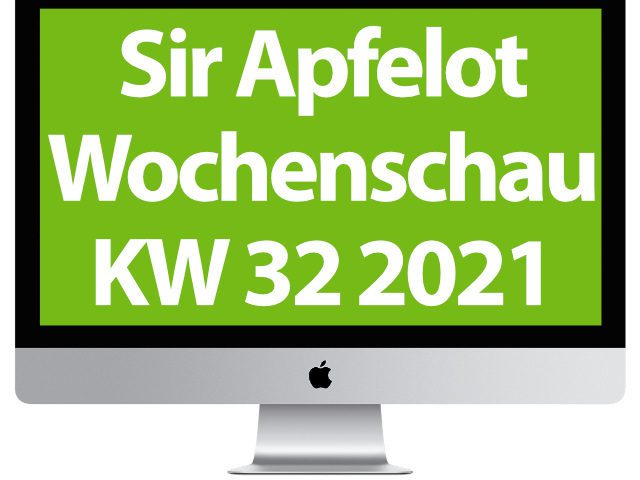 Don't worry, even if today is Friday the 13th, there is good news for you: you will get a new edition of the Sir Apfelot newsreel! This time I'll show you which Apple and tech news caught my eye in calendar week 32 of the year 2021. Among other things, the following topics are included: solar systems floating on lakes, Google's new app for 3D animations, exchange of WhatsApp data, alternative app stores and sideloading, 3 nm chips for Apple, the new MacBook Pro models, and more.

Electricity from floating solar systems - why not?

It's a perfectly understandable concept: solar panels float on a lake and use solar energy to generate electricity. Meanwhile, the body of water is kept from heating up too much. Quarry ponds are particularly suitable for this type of solar power generation, especially since old coal mine can be used sensibly. So why is this idea not implemented as often in Germany as elsewhere? This question poses e.g. B. Edison Magazine at this point. Examples from all over the world are shown as well as the fact that around 500 lakes from open-cast lignite mining are available in Germany - "According to the Fraunhofer Institute for Solar Energy Systems [...] in the 'mid double-digit gigawatt range'".

In the past few decades, 3D animations have evolved from a complex, computationally intensive and expensive technology to a hobby that is still complex but can also be realized at home. Whether it's YouTube production, general interest and playing around in the Blender app or as preparation for working in the media / in a film or game studio: 3D animations give you plenty of room to materialize. If you are looking for an easier entry than with Blender, you could find it with Monster Mash. The GoogleWatchBlog berichtet. The online demo to try out in the browser you can find here.

TikTok has become the most popular social network

In the pandemic year 2020, TikTok, a platform for short videos, has become the most popular “social media”. ITopNews goes with it, among other things Post one. It relies on analysis data from App Annie. After TikTok, however, Facebook Messenger continues to follow as a tool for exchange between different people and groups. Also ranking higher are Snapchat and Telegram. In 10th place, according to the source, is Twitter. As additional information, it is stated that users watch videos on TikTok longer than on YouTube.

And speaking of exchanges between people and groups: Facebook's WhatsApp Messenger will soon receive an update for iOS and Android. Thanks to this, it should be possible to take data with you when someone switches from an Android smartphone to an iPhone. If someone switches from the iPhone to the Android device (for whatever reason you should), data transfer should also be possible. MobiFlip goes with a Articles on. It also says that Samsung is the first manufacturer to get the function for which a USB-C to Lightning cable is used.

At dm, a drugstore chain, you can now pay for online purchases with Apple Pay. There is hardly much more to say about it. the is iFun.

Sideloading instead of a proprietary app store? Maybe soon ...

In the US, a weighty and bipartisan bill has been tabled, such as B. the iPhone ticker shows. The Senators Senators Richard Blumenthal (Democrats), Amy Klobuchar (Democrats) and Marsha Blackburn (Republicans) are directed against the monopoly of operating system providers with regard to the range of apps. Alternative app stores and sideloading (i.e. downloading apps from the Internet) should be made possible. This requirement is called in the legal form “Open App Markets Act”. After its explanation it finally says with the iPhone ticker: "Now it remains to be seen how successful Google and Apple will be in their attempts to water down the core requirements of the legal text".

3nm chips from TSMC - Apple is the exclusive first customer

In the coming year, the chip manufacturer TSMC is to start manufacturing 3nm chips. The first buyer is supposed to be Apple, and exclusively. This is what DigiTimes report (English) or NotebookCheck (German). The chips have a structure width of only 3 nanometers and could, as the German source says, Apple "a decisive advantage over its competitors" Offer. Because, it goes on to say: "TSMC's other customers, including AMD, Intel, Nvidia, MediaTek and Qualcomm, will have to wait until 2023 [...] ". Depending on the production time and other organizational factors, it is still questionable whether Apple will first use the new chips for the iPhone or for Mac computers.

Something like this could be the headline of one Article translate that caught my eye on MacRumors. It says in the introduction (translated): "Apple's living room hardware strategy remains ill-defined and lacks a coherent vision. Engineers are pessimistic about the product line, according to a new report". The information goes back to the reliable Apple source Mark Gurman, who works at Bloomberg. He describes that the Apple TV is a bad and more expensive alternative to other offers. Nevertheless, it is shown that a combined Apple TV-HomePod hardware should appear in 2023. Further information is available in the linked source.

In addition to the iPhone 13, the Apple Watch 7 and the AirPods 3, we also expect two new models of the Apple MacBook Pro this year: one with a 14-inch and one with a 16-inch display. Their mass production should now have started, it says in one Post from iFun. Here one refers to DigiTimes (English). According to this, up to 800.000 units per month should be produced between August and November. You can read here which products we are expecting this autumn: Apple September Keynote 2021 - All the products we expect. Also, there probably won't be just one Apple Special Event for all products. So take a look here: Apple events in fall 2021 - MacBook Pro in October, iPad mini in November?