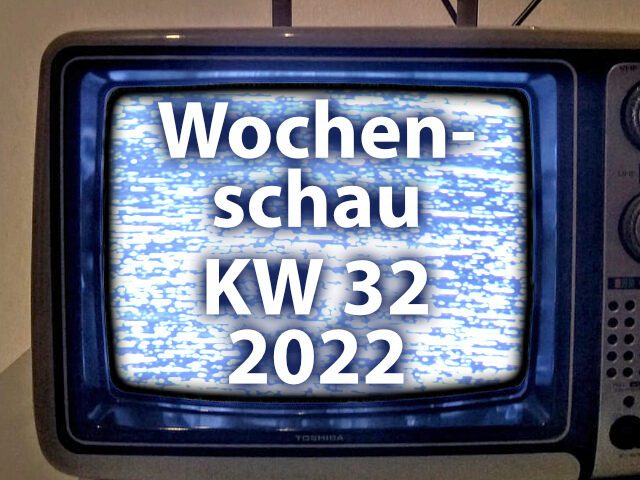 Besides App recommendations for the Apple Mac this week there is also the Sir Apfelot newsreel as a second regular format here in the blog. This time I'll show you which Apple and tech news I particularly noticed in calendar week 32 of 2022. Among other things, the following reports are included: unmasking fake online shops, CCC hacks video identification, smart ABUS door lock with a security gap, news from the iOS 16 beta, support document planned for details on firmware updates for the Apple AirPods, AirTag Stalkers convicted in the UK, and more.

In the Sir Apfelot newsreel for calendar week 32 of 2022 you will find the following reports, among others: AirTag stalker condemned, fake shop finder of the consumer advice center is online, BSI warns of unsafe ABUS door locks, CCC shows video identification hack, news from the iOS 16 beta, Disney+ gets more expensive, and more.

Fake shop finder of the consumer advice center is online

The Verbraucherzentrale NRW eV, in cooperation with the other consumer centers of the federal states and the Federation of Consumer Organizations, has created a new sub-page called Fakeshop Finder brought to life. There, the question "Is this online shop legitimate?" should be answered by simply entering the shop URL - i.e. the Internet address of the digital shop - in a text field and then clicking or tapping the "Check shop URL" button. With the tool, counterfeit but deceptively real-looking shops can be transferred, so that one can protect oneself against money transfers without delivered goods or against data theft. After checking a URL, information about the checked shop is listed.

To try out the tool, I simply entered cyberport.de. The rating was: "No signs of a fake shop found.In addition, the shop has not attracted negative attention so far and it is displayed whether there are positive mentions of the shop, in which country it is hosted, how long the domain has existed and so on. That all read as a very plausible summary. I only found one small error, namely the statement "No imprint was found", which can easily be refuted with a search (cmd+F) for the word imprint. One reason for the error: Cyberport blocks automatic access to the imprint.

Tried the consumer advice center's fake shop finder: If the imprint of a shop was not found, this may be due to a security setting. The manual search for the imprint helps here.

Like the Chaos Computer Club (CCC) this week announced the video identification procedure, which can be used, among other things, for digital access to one's own patient file, was hacked. With "open source software and some paint", the identity check could be tricked into accessing data from a test person (who had previously consented to the test). In addition to the linked entry on the CCC website, in which the whole thing is summarized, you can also read the procedure of security researcher Martin Tschirsich in detail in the 27-page PDF document "Practical attack on video ident“ see in detail. In short: the security mechanisms of the procedure introduced in 2021 for accessing the ePatient file were overcome with little effort.

According to the BSI, ABUS wireless door locks are not secure

The Federal Office for Information Security has been warning since August 10, 2022 "against the use of insecure wireless door locks from the ABUS brand". In the appropriate press release it says, among other things: "According to the findings of the BSI, a vulnerability in the ABUS product 'HomeTec Pro CFA3000 wireless door lock drive' means that attackers who are in the vicinity lock and unlock the wireless lock if the vulnerability is exploited and thus gain unauthorized access to buildings and offices or can provide apartments.It is also noted that ABUS has already confirmed the security gap and notes that this is a discontinued product whose successor is safe.

Not just an advertising subscription: Disney + increases the price of the regular subscription

It has been known for a long time that Disney+ – like Netflix – wants to introduce a cheap subscription model that is counter-financed by advertising. Now there is official breakdown the costs for the two subscriptions, which are initially being rolled out on the US market. There it stays at $7,99 per month for the basic subscription, except that there are now ads. The new premium subscription without ads costs $10,99. Or to put it another way: The previously ad-free offer will be 3 dollars more expensive, while the "cheap" offer with advertising collects the previous price. Help for financially weaker Disney fans looks different. So basically it's just a price hike with a bit of glitter.

The Smart Connector on the iPad Pro has so far had three pins for connecting to accessory products. However, that could change with the coming generation of Apple tablets, iFun reports in an issue this week Entry with reference to a Message the Japanese site macotakara.jp. The new iPad Pros with M1 or M2 chip could have four pins on the back or a border to connect specially designed accessories that are not backwards compatible. At iFun it is suspected that the whole thing is related to DriveKit, i.e. the installation of manufacturer-specific drivers for additional functionality of USB and Thunderbolt devices.

Two news from the iOS 16 beta

In a month we can already have the annual SeptemberKeynote expect from Apple. Then the iPhone 14 will certainly come along iOS 16 published and issued the upgrade to this operating system for older devices. Until then, developers and interested parties can register in the corresponding Beta versions look around and discover new features. In the iPhone ticker I found two reports this week that address exactly that. The first revolves around the battery percentage display in the iPhone status bar; the second shows that for screenshots, in addition to saving as a photo or file and deleting, there are two additional options: "Save as quick note" and "Copy and delete".

There are always firmware updates for the Apple AirPods, AirPods Pro and other headphones from the iPhone manufacturer. So far, Apple hasn't said much about the benefit of each software update - most likely it was about bug fixes, feature improvements, power savings, and other performance stuff. A support document with precise information seems to be in planning. That works too, according to one Entry by MacRumors, from the current iOS 16 beta. There is a link to a subpage of support.apple.com under Settings -> General -> About -> AirPods. This will probably be visible to everyone with the iOS 16 release in September.

With in-house functions of iOS and iPadOS, Apple has introduced the possibility for users to be tracked by Apps and to object to advertisers. The Meta company, which owns Facebook, Instagram and WhatsApp, doesn't seem to care. In the Instagram and Facebook apps, for example, users can be tracked if they tap on a link and this is in the in-appBrowser opens. Then Meta can theoretically track all actions, including text entries of login data, payment information, e-mails, chats, etc. There are details on this in the blog by Felix Krause.

AirTag stalker gets jail time and no contact ban

In the UK, a man who stalked his ex-girlfriend with AirTags has been sentenced to nine weeks in prison. In addition, there was a temporary injunction prohibiting contact with the victim of the stalking attack. Shortly after AirTags entered the market in 2021, they and similar trackers were criticized because they could be misused for criminal offenses. This criticism was now, inter alia, in the Entry confirmed again by 9to5Mac for the case shown. "Christopher Paul Trotman, 41, harassed his ex with constant phone calls and questions, before ordering an AirTag on Amazon and glueing it to her rear bumper to track her every move“, is written in it Articles quoted by the Daily Mail.