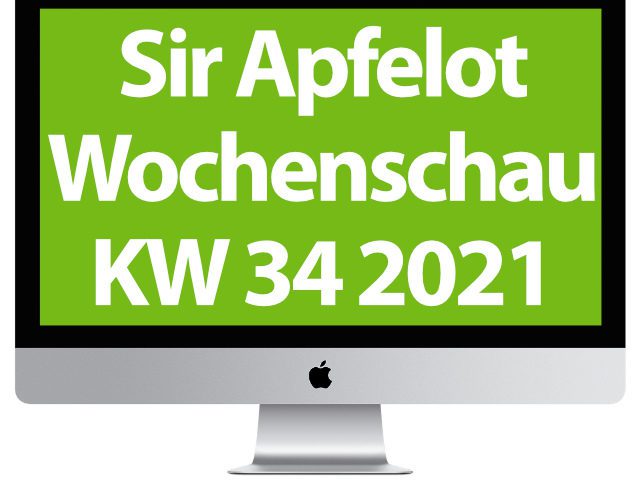 Attention attention! This is the last Sir Apfelot newsreel in August of this year. With the coming September we will immerse ourselves again in the time of the Apple novelties. Maybe we can announce the official date for Apple's September keynote next week. Before that happens, there is the Sir Apfelot newsreel for calendar week 34 of 2021 at this point. Among the Apple and tech news that caught my eye this week, you will find the following topics today : Osram switches off the Lightify cloud server, Apple news from China and South Korea, rumors about Mac mini and Apple Watch, and a lot more.

In the Sir Apfelot newsreel for calendar week 34 of 2021: Osram Lightify will be switched off, electricity from the sea, requirements for clean hydrogen, Tim Cook Apple CEO for 10 years, in-app purchases in South Korea, 45 mm Apple Watch, The Simpsons, and more.

The Osram Lightify cloud servers are switched off

Among other things, the iPhone ticker goes with one Entry on this subject. However, it is still possible to operate the smart home lighting via the local network. That shouldn't be surprising for the respective users. Because the linked message also states that Osram announced the end of its server service a year and a half ago. Important for all users: Before August 31, 2021, make sure that the individual Osram products have the latest firmware installed. "This applies in particular to actively used (or unused in the drawer) Lightify gateways“Is shown.

Why are hyperlinks blue in the web browser?

Elise Blanchard, a UX designer at Mozilla, took up this question. By means of a Entry in the Mozilla blog she shows the history of the link in the WWW. That's a pretty long look back, but I'll include the linked article in the local news collection because it was published this week;) Elise Blanchard found the origin of the blue web hyperlinks on her search: the Mosaic- Browser that pioneered many web browsers in the 1990s. Although it goes back a long way to 1964, it only found the answer in the release notes of Mosaic 0.13 from April 12, 1993: blue was introduced as the color of unvisited links and purple as the color of visited links. Why? You can read that in the linked source.

Electricity from the sea and commentary on “green” hydrogen

This week at heise online I found two interesting articles on renewable energies. One of them deals with wave power plants, which in laboratory tests have already "a very decent efficiency" achieved. The new type of wave power plant, which should be powerful and at the same time low-maintenance, was developed at the Royal Melbourne Institute of Technology. Two propellers rotating in opposite directions are used, which convert the kinetic energy of the waves in the sea into rotation. Further information and background information you can find here.

The second article from heise online is a comment on the subject of hydrogen, especially on "green" hydrogen and its contribution to climate protection. It emphasizes the clean production thanks to surpluses from wind power and solar power as well as the application in the right areas. In short, the bottom line is that renewable energies still need to be expanded much further. You can read the classification of the topic of hydrogen, which is well worth reading read here in full.

Tim Cook has been Apple's CEO for ten years

While the memory of co-founder Steve Jobs is kept alive, Tim Cook has been in the executive chair of the technology company from Cupertino for ten years. This is what MacRumors reported on the corresponding reporting date, August 24, 2021, at this point. In the linked article, the story from 2011 is briefly reviewed. Among other things, it is mentioned that Steve Jobs died two months after leaving the boss post at Apple. If you want to find out more about Steve Jobs and Tim Cook, you can do so with the following books:

Engraving on Apple devices: a lot is prevented in China

With reference to a Message from The Citizen Lab (English) you can get one from the iPhone ticker (German) Items Read that discusses impossible words and phrases on Apple devices. In China, for example, a total of 1.045 terms are not permitted for an engraving. In addition to insults, swear words and the like, this also includes content that is critical of China. For example, the sequence of numbers 8964, which could recall the Tian'anmen massacre on Tiananmen Square on June 4, 1989, is not engraved. Apple's attitude towards China with regard to engravings goes further than Chinese laws require. The same goes for regions like Hong Kong and Taiwan. The Citizen Lab evaluated a total of six regions.

Upcoming models of the Apple Watch with 41 and 45 mm displays?

Will the Apple Watch be made bigger again this year? According to a possible leak from a bracelet for a 45mm model, this could be the case. A picture that is supposed to show the bracelet with the imprint "45MM" was distributed on the Twitter account DuanRui. You can find the tweet .. The person behind the account points out, however, that no first-hand leaks are shared, but images that e.g. B. make the rounds on Chinese social media platforms. If a 45 mm model of the Apple Watch comes, then this is certainly the larger version of the watch. The smaller one could have a 41 mm display, as the previous models (e.g. 38 mm and 42 mm) also differed by 4 millimeters.

Apple only got the last year first Mac mini with an M1 chip brought on the market. However, current speculations now assume that an updated model could be presented this autumn. If not at one of the events that are expected for September, October and November, then maybe just by press release. The Mac mini with M1X or M2 chip could not only bring more power, but also other connections: instead of a classic power supply connection, a MagSafe connection and, in addition to USB-A, HDMI and Ethernet, this time four instead of just two Thunderbolt 3 connections.

Face ID in the iPhone 13: does unlocking work with a mask?

Several sites this week picked up the Face ID topic with reference to the upcoming iPhone 13. This refers to the leaker Jon Prosser, who claims that Face ID will also be able to cope with mouth and nose covers from the iPhone 13. You will find a look at the rumor and a classification of the possible new technology in Apple's previous innovation behavior, among other things with this abbreviation to the apple page.

In-app purchases only via the App Store: may soon be banned in South Korea

Both Apple and Google could soon be forced in South Korea to make payments for apps and app content possible outside the app store or play store. In this way, users could take advantage of offers that e.g. B. can be concluded via the website of the developer. A corresponding draft law is currently available for examination, it says among other things in one Items by MacRumors. It is rather questionable whether the whole thing will have an impact on other countries and regions if it is successfully implemented. Above all, Apple argues that only purchases made via the App Store are really secure, do not involve fraud and can be clearly managed.

"The Simpsons: Hit & Run" as a remake in Unreal Engine 5

Anyone looking for a more or less child-friendly alternative to GTA in the early 2000s was well advised with “The Simpsons: Hit & Run”. Among other things, there was the game for the Windows PC and the Nintendo GameCube. At least I've played it on these two systems. But now the YouTuber behind the reubs channel has dared to do a remake, namely in Unreal Engine 5. This means that the graphics have a much higher resolution and the game has been adapted to current requirements. Unfortunately, the previous content can no longer be downloaded - due to copyright problems, of course. That Video you can still watch the topic.