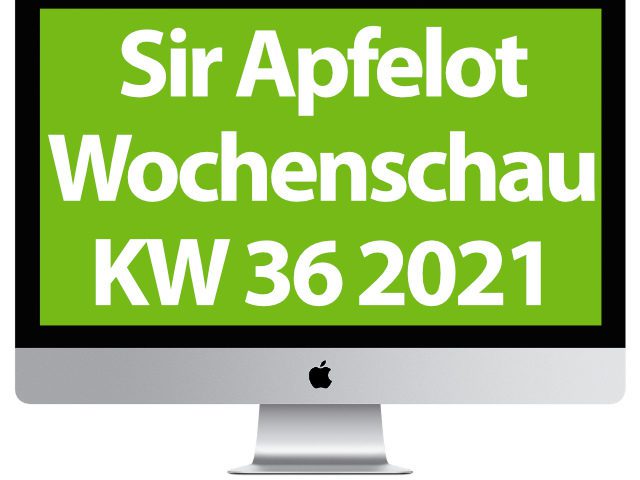 Something's going on today ... first Phishing warning regarding the Sparkassen-Mail, then the 5 app recommendations for this month and now the Sir Apfelot newsreel. In today's issue you will find the Apple and tech news that caught my eye in calendar week 36 of 2021. Among other things, these messages are included: Apple confirms the date for the September keynote, Protonmail is not as secure as expected, WhatsApp is planning a new last-seen function, news about the Apple car, rumors about the soon-to-be-released Apple devices, and much more.

I already have on Tuesday evening with a small contribution noted that the iPhone manufacturer from Cupertino will hold its first keynote for this fall next Tuesday. Since the slogan of this year's September presentation is "California Streaming", one can assume again that it will not be a live performance. If you want to watch the stream of the pre-recorded presentation of iPhone 13 and Co. on time, you can do so on September 14th, from 19:00 p.m. on the Apple website, on YouTube, on Apple TV and on the other well-known channels to do. But then I'll write a report in German again;)

Protonmail - Swiss e-mail provider not so secure after all

Activists, journalists and everyone else who wants to send anonymous e-mails are certainly familiar with the Swiss provider Protonmail. With this, an account can be set up and used easily and without a lot of information. It is also promised that no connection data will be saved, e.g. B. no IP address. A current case about the t3n berichtet. Accordingly, the mail provider has "transmitted the IP address and browser footprint of a user to the French police". This is said to belong to an activist group that has occupied houses. The t3n tip: Use a VPN and / or the Tor network with Proton too.

WhatsApp: Only show certain contacts when you were online

Like 9to5Mac in one Entry shows, Facebook is working on the possibility of only showing certain contacts when you were last online for its WhatsApp Messenger. As part of the improvement of privacy settings, this option should be available on compatible devices. In the menu item of the settings, in which you can specify who can see the online status, there will be the item "My contacts, except ...". There you can mark those contacts who are not allowed to see when you are using WhatsApp or whether you have just opened the app. The feature should be a long time coming, however, they say.

Consumer protection: Pay less if the internet is slow

The Federal Network Agency has drawn up guidelines according to which it will be possible to reduce internet connection costs from December 2021. If the speed of the connection is noticeably below the maximum speed of the tariff booked, this is then possible. Heise goes online with you Post a. "Anyone who has significantly worse Internet at home than the provider promised can reduce payments to them from December onwards", is it [called. The Federal Network Agency already has criteria for this, but only in draft form. An applicable version should then "after a survey of market participants“Can be created from it. You can find more details on the topic in the linked source.

I have to admit that I am generally not very familiar with processors or microchips. I know to some extent about the performance and consumption advantages of ARM chips, but then I run into certain limits. But if you are more interested in the topic and want to read about Apple's (possible) RISC-V plans, then I recommend a current one Post from golem. This shows that Apple is looking for programmers in this area in a job posting. The display for "RISC-V High Performance Programmer" you find here.. What RISC-V actually is is stated among other things at Wikipedia.

OMG does not stand for "Oh My God", but for "Offensive MG" and the abbreviation in it for the developer of the cable: Mike Grover. The OMG Cable sees, according to one Articles at heise online, like a normal, white USB-C-to-Lightning cable. However, there is much more technology in the spy tool. It includes software that, for example, performs keystrokes on the Apple Mac and then records the user. The monitored persons do not have to set up an Internet connection to forward the entries, because the cable has its own WLAN hotspot. An update from the linked source also mentions one USB-C cable for Android devices and the iPad Pro.

In a recent article by MacRumors, the car from Cupertino, the Apple Car, illuminated. Is shown z. B. that the first efforts for this started in 2014. In order to be able to overcome hurdles in the development of hardware more quickly, there have been contacts with BMW, Toyota, Hyundai and Nissan in the meantime. However, there was apparently no real agreement and in 2016 hardware development was put on hold. The software has since been further developed. In order to avoid further delays, Apple is said to have decided against cooperating with other manufacturers and developed the hardware itself. Now the iPhone manufacturer is looking for suppliers for the individual parts.

News and rumors about the upcoming Apple devices

As mentioned above, Apple will start presenting the new devices with iOS 14, watchOS 2021, macOS 15 and so on next Tuesday, September 8, 12. It can be assumed that the whole thing will again be divided into several streams; the following then in October and November. But what can we expect? Most likely the new models of the MacBook Pro with 14- and 16-inch displays and mini-LEDs. In addition to the revised displays, the M1X or M2 chip will probably be used. According to one Articles At the Macerkopf, the production of the laptops is on schedule. Parallel berichtet heise online that probably the Satellite radio of the iPhone 13 will not be available in all countries.

Sport with the Switch: Family Trainer or Ring Fit Adventure?