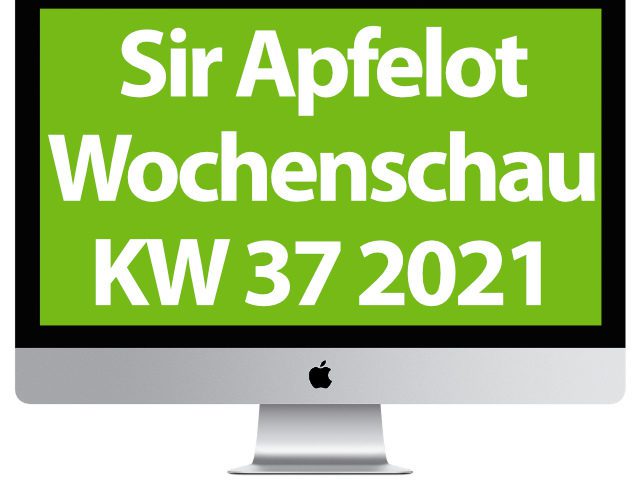 The first Apple product presentation this fall was behind us in the form of the “California Streaming” special event. But of course other exciting things happened this week. That's why you will find a well-stocked Sir Apfelot newsreel here again. This time I'll show you - in addition to the new Apple devices - which Apple and tech news I particularly noticed in calendar week 37 of 2021. Among other things, these messages are included: 40 years of the Chaos Computer Club, Nintendo Switch now supports Bluetooth audio, specifications of the Fairphone 4, iPhone 12 and iPhone 13 have the same amount of RAM, and more.

The topics of the Sir Apfelot newsreel in calendar week 37 of 2021 include: Apple September Keynote 2021, 40 Years of Chaos Computer Club, Specs of Fairphone 4, Ashley Gjøvik fired, and more.

You can also find the technical data, prices and further information on the individual devices here:

Buy iPhone 13 from Amazon and receive it directly at release

40 years of the Chaos Computer Club

The Chaos Computer Club celebrated its 12th birthday on September 2021, 40. On this occasion there were contributions with retrospectives on individual highlights of history as well as glimpses of the possible future of the CCC at heise online (here ) and at t3n (here ). The second linked source shows z. E.g. five milestones, including some hacks that caused a stir at the time. But the CCC is not only known for hacks from many years ago, but also for the disputes with digital offers and systems that are repeatedly carried out in the interests of clarification. In the end it was effective for the media focus on the Luca app.

An update for the Nintendo Switch has been available since the middle of the week, bringing its firmware to version 13.0.0. In addition to other innovations, there is finally native support for Bluetooth headphones and speakers. I have compiled details of the update, instructions for carrying out the same and the necessary steps for coupling the console with wireless audio accessories here: Nintendo Switch with Bluetooth audio - use wireless headphones without an adapter.

Data leak to the Fairphone 4

"Fairphone 4: photos and specifications for the 5G model surfaced", Headlines WinFuture at this point. Regarding this tweet the possible specs of the new Fairphone 4 are discussed. Accordingly, the smartphone, offered in gray and green, should come with 5G mobile communications, up to 256 GB of memory, 6,3-inch display and 48 MP camera system. The dual camera system on the back is to be supported by a sensor that has not yet been specified. The selfie camera on the front is shown at the top of the display in the form of a waterdrop notch. The main memory is specified as 6 GB RAM. Further data and the pictures can be found in the linked sources.

Does the memory of the iPhone 13 become known before the release?

Speaking of RAM in the smartphone: I have one at iTopNews Entry found, which shows, with reference to an Xcode beta, how much RAM is in the individual iPhone 13 models. Furthermore, the values ​​were compared with those of the previous year's models. This gives the following overview:

Production of the Apple AirPods 3 is ongoing

With reference to DigiTimes berichtete Among other things, MacRumors this week that the Apple AirPods 3 are currently already in production. The new wireless headphones were not presented as part of the September Keynote 2021 mentioned above, but are currently being installed. That could mean that they will be presented as part of Apple's likely October event. Then they are probably also available directly online and in stores. Or the technology giant from Cupertino will save the introduction of the new headphones in the form of a video this year and simply issue a press release on the launch. That would also be nothing new.

Ashley Gjøvik, a manager at Apple who had publicly commented on various grievances in the company, has now been fired. Already in week 31 we had reported on her case. After publicly reporting on discrimination, harassment and sexism at Apple, she was confronted not only with questionable and inappropriate "solutions" from the company, but also with a leave of absence. This now seems to have ended; but not with a return from Gjøvik to Apple Park, but by means of a resignation. this berichtet including golem. By the way, #AppleToo has formed around the public allegations, which you can read here: 2nd season "The Morning Show" and Apple's own problems (#AppleToo).