Today is not just the day Super Mario 3D All Stars for the Nintendo Switch as well as new Apple devices appear. Today is also Friday, so time for a new Sir Apfelot newsreel. This time I'll show you Apple and tech news that caught my eye in calendar week 38 of 2020. Among other things, the following topics are included: Apple event with new models of Apple Watch and iPad, firmware update for AirPods with "Spatial Audio", plans for a battery deposit, leak of a Chinese "foreigner database", news about the upload filter, and more. 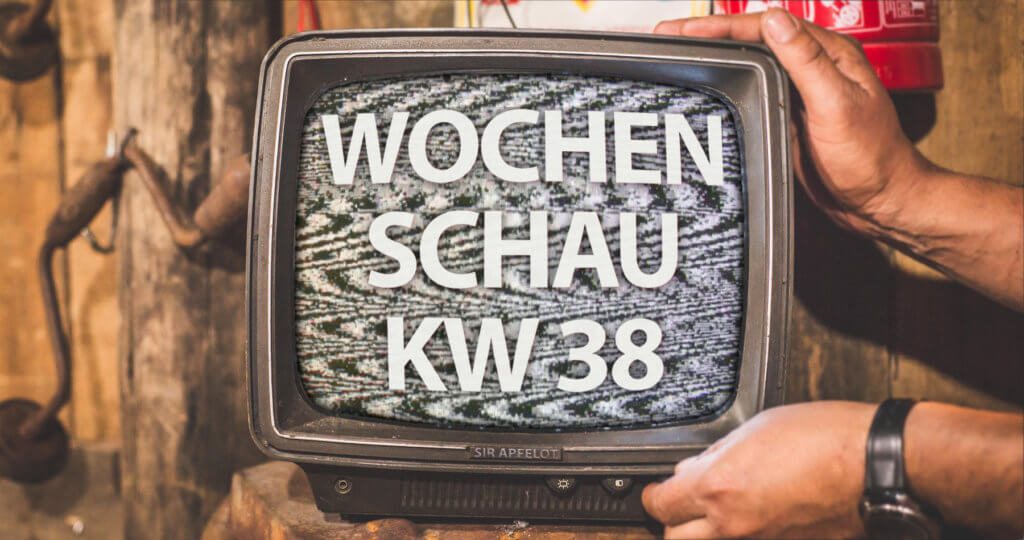 Included in the Sir Apfelot Wochenschau of calendar week 38 in 2020: The most important things from the Apple Special Event, spatial audio for the AirPods Pro, battery deposit for Germany, upload filters for websites, leak of a Chinese foreigner database, and more.

The Apple September Keynote took place on Tuesday at 19:00 p.m. local time. In the one-hour video that was previously pre-produced in Apple Park, the focus was primarily on the Apple Watch and iPad product lines. But I don't want to go into too much detail here, not even about the new “Fitness +” and “Apple One” services. Because you can already find the following articles here in the blog:

A little tip: Apple Fitness + will not be available until the end of the year and then only in the English-speaking world. In the linked post you will find the names of the trainers who have already published (free) workout instructions elsewhere;)

The current update for the Apple AirPods and especially for the Pro version not only ensures compatibility with iOS 14 and iPadOS 14. Also will a feature introduced in June usable: spatial audio. This simulates a surround sound that compensates for head and device movements. So it appears as if the audio is coming from the iPhone or iPad. In one Post MacRumors cites a reader as follows (analogous translation):

iOS 14 allows third-party apps to be the default browser, but a bug makes it difficult

Since yesterday, the iPhone update to iOS 14 - after initial problems and a bit of delay - has also become available in Germany. With the new operating system for the Apple smartphone, there are not only widgets, new functions for numerous apps and the like. But also the option of setting web browsers such as DuckDuckGo as the default app for opening links. In addition, a corresponding search widget has to be set up. It goes z. B. App risks at this point .

A third-party app can now also be set as the default for e-mails under iOS 14 and iPadOS 14. However, only until the next restart of the device, berichtet MacRumors. A bug then sets the standard back to Safari and Mail. The error is now known to Apple and an update should fix it soon. In other articles on various sites there is speculation that an iOS 14.2 update will be available soon.

A battery deposit should greatly increase the collection rate

Batteries of any size do not always end up where they belong after use: at the collection points, which recycle or dispose of them properly. In any case, you have nothing to look for in household waste. To ensure that this gets better in the minds of consumers, a battery deposit is currently being debated. This shows z. B. Spiegel Wirtschaft in one Articles on. An amendment currently being discussed in the Bundestag, an upcoming EU directive and the demands of the disposal companies are compared. The car example shows that a deposit principle can work: "[...] A deposit of 7,50 euros is levied on each starter battery, the collection rate is 99 percent."

China collects data from foreigners around the world

A private company from China is supposed to Post von heise online have collected information from around 2,4 million people who do not come from their own country. With reference to the Australian side ABC describes that the leaked data sets were partially analyzed by an Australian cybersecurity company. The approx. 250.000 datasets that were viewed included 52.000 Americans, 35.000 Australians and around 10.000 Indians and Brits each.

According to one Articles According to the Washington Post, the data collected by the state-affiliated Chinese company includes biographies, family trees and social media content of US politicians and the military. But public people are also among those who have been scrutinized more closely. In addition to publicly available information, it also contains confidential data. The person directory is, so heise online, but sometimes not well structured or meaningful.

Copyright, quotes and memes: News about ancillary copyright on the Internet

The buzzword “upload filter” is no longer as frequent as it was about two years ago. It has become quiet about "Article 13" and Co. Now Golem has the topic in one Entry resumed. Because, as it is said: "A new draft to implement EU copyright law suits publishers and Google". Everything is currently still a draft, but could become law in June 2021. Larger excerpts from press releases are to be prohibited.

Platforms on which content is uploaded should also only take the "best possible" measures for upload filtering, and not "all". That certainly suits smaller sites without a lot of staff or money. However, in Paragraph 6, specifications on the scope of work quotations are specified: 20 seconds of a film / soundtrack, 1.000 characters of text, and graphics up to 250 kB. Further details and discussion points can be found in the linked source.

So that they don't go under, at this point briefly the reference to current posts here in the blog. Not just that Comparison of QLED and OLED televisions clicked well; there is also information on the Buying an old iPhone to use the Corona warning app. You can equip the children with it, for example.

Perhaps you are looking for a charger that offers three (!) USB-C ports with Power Delivery in addition to its USB-A connection: You can find this with the new Ugreen model. And finally the reference to the weekly offers from Anker until Sunday, September 20.09.2020, XNUMX: Here you can get a projector and a USB-C hub cheaper. Which post did you like the most this week? Feel free to leave a comment;)