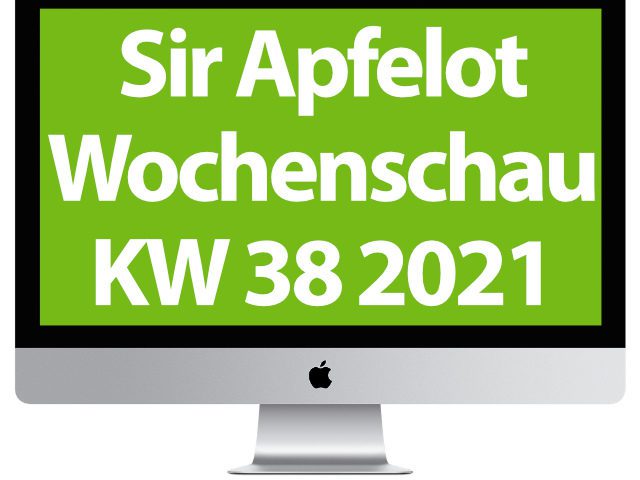 Nachdem last week Apple introduced a few new devices, Nintendo has now made some exciting announcements. You can find more about this at the end of this Sir Apfelot newsreel. Before that, I'll show you other Apple and tech news that caught my eye in calendar week 38 of 2021. Among other things, the following messages are included: Driver's license on the smartphone, SharePlay reactivated in iOS 15.1, proof of vaccination in the Apple Wallet, USB-C on iPhone, iPad and Co., carpet patterns confuse vacuum robots, and a few more.

"In the future, drivers in Germany will be able to create a digital version of their driving license and save it on their smartphone“, It says, among other things, in one Entry by t3n. It explains that the driver's license certificate consisting of bits and bytes should initially be used to make time-consuming video identity checks for car sharing unnecessary. Work on the use in the context of police controls is currently being carried out at the EU level. Incidentally, the app required for digitizing the driver's license is called “ID Wallet”, which requires the use of the e-ID card that has been activated for online use. More details in the linked source.

If a vehicle is to move autonomously through the area, its AI must first be taught an understanding of the environment. If this is too simple, it can lead to undesirable misconduct. A Post on this topic I found at t3n. The catch is that a vacuum cleaner robot is confused by the pattern of a carpet and interprets its black lines, which run through colored sections, as a difference in height. The device does not continue to drive because it should not fall down somewhere. Another example in the source: A car around which a solid and a broken line has been drawn with salt. It doesn't drive because this symbolism forbids it.

Microsoft wants to make it easy for users who are setting up Outlook or Exchange for the first time. In order to be able to add an e-mail inbox more easily, server information is automatically retrieved as soon as the e-mail address is entered. However, this approach can be used as in a Message is shown by heise online. It's not just about getting email logins, it's also about Windows logon data. In the explanations of the incorrect "Autodiscover" protocol used, reference is made to the security researchers at Guardicore. If you use Windows and the programs mentioned, the section “How to protect yourself” may help you further in the source.

Problems with iTunes 12.12 on Windows computers

And again the Microsoft operating system: like iFun in one Entry shows there are a few problems with the Apple program iTunes under Windows. The update to version 12.12.06 is said to make the app partially completely unusable. Instead of iTunes, the error message "iTunes cannot run because some of the required files are missing. Please reinstall iTunes“- but the new installation in the present version does not bring any success. A workaround could work, however: Change the operating system to English; apparently the error only occurs in Windows running in German (possibly with "files are missing“Meant the German language package).

The update to iOS 14.8, or with the new iPhones, the update to iOS 15 has been out for a few days. Among other things, this closes a security gap that enabled the Pegasus spy software to work on Apple smartphones. This was mentioned here in the blog in August. so berichtet including the iPhone ticker that the security gap has also been closed under iOS 12 - with the update to iOS 12.5.5. This was rolled out for all devices that are no longer compatible with iOS 13, 14 and 15. At the same time, heise online shows in one Entry found that Pegasus spyware was found in five government officials in France.

Incidentally, SharePlay should now also be activated with iOS 15.1. The feature for sharing streams and other multimedia via FaceTime was postponed to after the iOS 15 start. Like now MacRumors describes, SharePlay is activated in the beta versions of iPadOS 15.1 and tvOS 15.1 in addition to iOS 15.1. For developers this means that they no longer need a “SharePlay Development Profile” to test their applications with the function. What do you think about it? Are you looking forward to SharePlay or is it enough to watch films and series together by countdown and individually pressing play? Feel free to leave a comment! :)

At the urging of the EU: Will Lightning be replaced by USB-C?

The demands of the EU in the direction of smartphone manufacturers that they align their interfaces to a standard are not new. While many Android devices already have a USB-C port, Apple still uses the in-house Lightning design for the iPhone and some iPad models. The efforts made by the EU since 2018 could now bear fruit from 2022, as MacRumors (English) and the iPhone ticker (German) called. It seems unlikely that the iPhone 14 will already be equipped with USB-C. Because: There should be a two-year transition period. The iPhone with USB-C? Probably not until 2024!

At midnight local time there was on Youtube a new Nintendo Direct, a collection of announcements from the Japanese game manufacturer in video form. There were z. B. the rumors about an offer of N64 games and an N64 controller for the Nintendo Switch confirmed. But there were also games and controllers from the Sega Mega Drive. Furthermore, new games such as "Kirby and the Forgotten Land" and "Bayonetta 3" were announced. For "Super Smash Bros. Ultimate", "Animal Crossing: New Horizons","Mario Golf: Super Rush“And more content updates were announced. In addition, the voice actors of the Super Mario animated film, which is due to hit the cinemas for Christmas 2022, were unveiled.