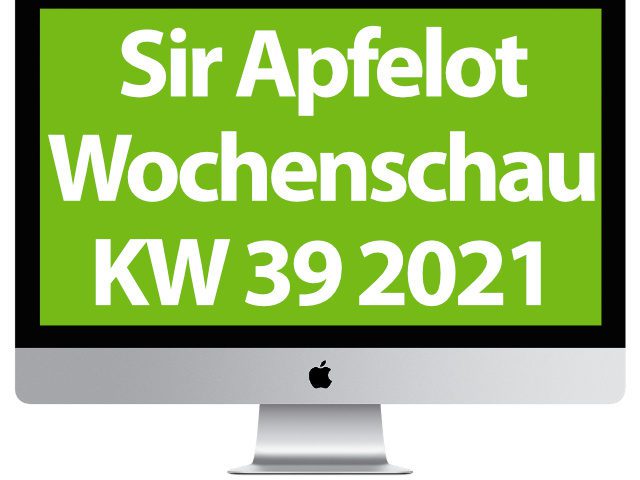 It's October! Not just Halloween, but also the next Apple Special Event is at the door. But before that happens, there is a new edition of the well-known Sir Apfelot newsreel at this point. This time I'll show you which Apple and tech news I noticed in calendar week 39 of the year 2021. Among other things, these messages are included: New Amazon devices (with some security concerns), temporary end for the digital driver's license, macOS Monterey and Universal Control, bugs and errors in iOS 15, and more.

In the Sir Apfelot Wochenschau for calendar week 39 of the year 2021 included: Problems with iOS 15, security vulnerability in AirTag, Amazon's surveillance robot, jelly scrolling on the iPad mini, flop when digitizing the driver's license, and more.

Also and especially at Golem this week I found a few reports about the new smart home assistants presented by Amazon. So z. B. via the "Echo Show 15" berichtetthat is attached to the wall like a picture frame and recognize people in order to be able to display individualized content. Because paper is mega out, users can also leave notes or messages on the Echo Show 15. The rolling robot "Astro", on the other hand, can travel around the entire apartment and brings a telescope camera with it for an all-round view. In one first post is it about general information, another highlights the privacy and security concerns about Astro.

Digital driver's license: an absolute flop for the project

Last week I showed you that the digital driver's license is coming and that you have to confirm your identity with the ID Wallet app: Read here. This week there was an update, among other things here with the iPhone ticker. Accordingly, there are massive security concerns and the ID Wallet app has therefore also been flown from the app store. Reference is made in the article this tweet. In it, @fluepke shows the joint research with @LilithWittmann and shows that the system is vulnerable. I don't understand that much about it, but I think that the whole thing could have been tested by the makers before the start of the project.

The new MacBooks from Apple are expected this month - and with them the new macOS Monterey operating system. This was done as part of the WWDC21 already announced with some innovations and exciting functions. One of them, namely Universal Control (seamless control), is said to be delayed. Similar to SharePlay on iOS and Co. the new macOS function will probably only be added later with a later update of macOS 12. At least that's what the current one suggests Beta version out, which omits the feature. The source for this is a Post from iFun.

Overview: These Mac models are compatible with Monterey

Security vulnerability in AirTag: Finders can be redirected to phishing sites

Anyone who finds an Apple AirTag in the wild can scan it with both an iPhone and an Android device. The tracker can refer to found.apple.com, but also lure the finder into a trap through a security hole. If fraudsters use AirTags to hide the code for forwarding to any website in their supposed contact data, then some phishing or malware download scenarios can be implemented. Like the iPhone ticker here shows, the problem has been known for months and was also reported to Apple by security researcher Bobby Rauch.

"Keynote offers new tools for joint presentations; Pages makes it easy to work with documents on the iPhone; and Numbers brings pivot tables to iPhone, iPad and Mac“, It says in one current press release from Apple. It shows the new features in the free iWork package with detailed descriptions and a few screenshots. There is not (yet) an extra post on this here in the blog, because we have not yet tried the features. But if you are interested, you can find out more on the Apple website.

App payments in South Korea: plans should be implemented quickly

Like in the Calendar week 34 shown, South Korea defends itself by law against the app store or play store compulsion by Apple and Google when it comes to the purchase of apps or the conclusion of corresponding subscriptions. As it is now, among other things, in a Entry by MacRumors, Apple and Google are to submit plans to implement the law by mid-October. One appeals here Information from Reuters. A domino effect is predicted for MacRumors as the app store guidelines apply worldwide. The changes in South Korea could soon also be felt in other markets.

In a collective article we have already shown you some of the teething problems of the new iPhone operating system: iOS 15 for the iPhone - New update technology and possible problems. While browsing through MacRumors, I came across a few bugs and errors in iOS 15. So some Siri commands related to calls, voicemail, emails and similar data seem to have stopped working. It is unclear whether this is a bug or whether the functions were deliberately removed by Apple ( ). Furthermore, it can happen that saved photos (e.g. from iMessage) are lost under iOS 15, especially if the corresponding message is deleted ( ).

According to Apple, “jelly scrolling” is normal on LCD displays

The new 6th generation iPad mini is an exciting device. Not only does it have the latest mobile SoC from Apple, the A15 Bionic Chip, it is also compatible with the Apple Pencil 2 and, thanks to USB-C, can be used with many other devices. It's just a shame that many users are currently complaining about so-called “jelly scrolling”, ie the uneven updating of the screen on the left and right. This is particularly noticeable when scrolling in portrait mode, as some slo-mo shots show. According to one published by Ars Technica Apple's statement this is normal for LCD screens, however, as they update line by line. Still, it's not nice.