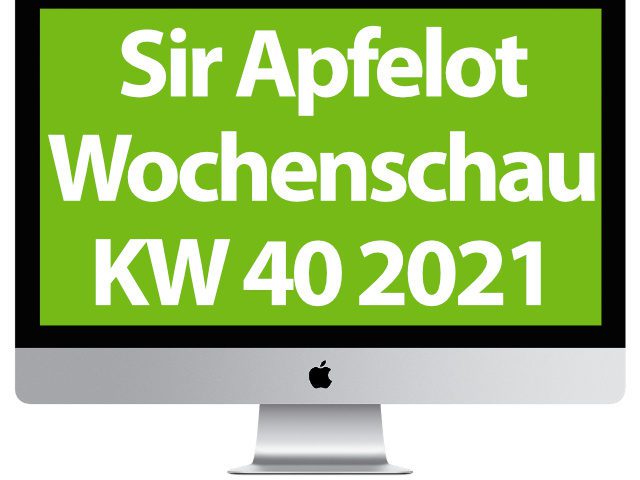 It's October, autumn has arrived and today is still Friday. The latter means that it is high time for a new Sir Apfelot newsreel. This time I'll show you which Apple and tech news caught my eye in calendar week 40 of the year 2021. Among other things, these messages are included: Windows 11 is ready, Zuckerberg Group with failures on all platforms, Google ensures more security, CCC program for digitization in Germany, EU wants to use iPhone NFC, problems with apps can (soon) be reported again, and a lot more.

Included in the Sir Apfelot weekly newsreel for calendar week 40 in 2021: Windows 11, more security for Google accounts, digital government concept of the CCC, A15 Bionic compared to its predecessor, 10th anniversary of Steve Jobs' death, and more.

Windows 11 is available as an upgrade

If you have a compatible PC with Windows 10, you can upgrade to Windows 11 for free as of this week. The new operating system not only offers a revised user interface, but also new functions. WindowsUnited offers an overview in one Post . In another Post the hardware requirements for Windows 11 are shown on the page. All compatible AMD, Intel and ARM processors are listed in individual tables. It also shows how many GHz the processor, how many GB of RAM and how much free memory the hard drive should have. You can see these and other details in the linked source.

Both WhatsApp, Instagram and Facebook were unavailable worldwide for several hours at the beginning of the week. No posts could be made, no comments written, no messages exchanged either via the websites or via the apps. Other functions were also unavailable. Not only did this mean an increase in SMS messages and registrations with the competition (e.g. Telegram). The Zuckerberg Group's share price also fell directly. The reason for the blackout is said to have been a faulty configuration in the entire system, including the data centers. Backgrounds are in one Articles from Basic Thinking as well as in the official Facebook blog.

"To increase account security, Google will make two-factor authentication mandatory for millions of users in 2021“, It says as an introduction to a current issue Entry from golem. There one refers to you Post on the official Google blog. The safer login is to be activated for around 150 million existing accounts. Afterwards, not only the name / e-mail address and the password are required to log into a Google service, the identity must also be confirmed. This can be B. can be implemented via a smartphone app. The measure is intended to make external access more difficult or, in most cases, impossible.

It should be common knowledge that the government of the Federal Republic of Germany has slept in the matter of digitization so far. That is why the Chaos Computer Club (CCC) presented a proposal for a digital government program before the new government could come together. A Post this week, among other things, published Golem. This summarizes that there must be no “business as usual” and that omissions from several decades must be made up for. In addition to an expansion of the infrastructure, more education for the termination "of digital illiteracy" required. You can find the CCC's paper with this link.

Lawsuit against Apple: EU wants the iPhone's NFC access to be opened

It is currently not possible for third-party providers to use the NFC interface of the Apple iPhone. Apple reserves the right to reserve these for Apple Pay. Like the t3n magazine in one Articles regarding to Reuters reported, the EU wants to sue the iPhone manufacturer for distorting competition. In addition to a large fine for Apple, the lawsuit could result in Apple being forced to open NFC (within the EU) to developers - especially for mobile payment systems. However, rapid development should not be expected here. At t3n, the last subheading of the linked article says: "Complaint will be filed in 2022".

Problems with apps can be reported again

Step by step, Apple is currently rolling out the "Report App" button, which was missing in the App Store for some time. So if there are problems with an app, suspected fraud or privacy concerns, users can contact Apple with just one click or tap. This week shows z. B. the Macerkopf in one Post on. It says about the piecemeal distribution of the reporting option: "This feature is currently available to users in Australia, Canada, New Zealand, and the United States and will be rolled out to other regions over time".

That's how fast the A15 Bionic Chip from Apple is

Let's move from the software to the hardware of the Apple iPhone. The A13 Bionic SoC is installed in the current 15 series, which has now been examined for its exact performance and compared with its predecessor (A14 Bionic). You can do this, for example, at iTopNews read up. There it says, among other things, that the performance cores of the A15 bring up to 3.240 MHz on the clock. With the A14 it was only up to 2.998 MHz. The chip's efficiency cores increased to 2.016 MHz (from 1.823 MHz previously). In addition, the cache has been increased to 32 MB.

This week was also the 10th anniversary of Steve Jobs' death. The co-founder of Apple died on October 5, 2011. In honor of Steve Jobs, Apple changed the homepage of apple.com for one day this week and published a video as well as a message from the Jobs family. The video is now also available on the iPhone manufacturer's official YouTube channel. You can also find it along with more detailed information and links to other media related to Steve Jobs in this Sir Apfelot article: 10th anniversary of Steve Jobs' death - Apple shows souvenir film.

Steve Jobs showed the stability of the iPhone by throwing it

Around the 10th anniversary of Steve Jobs' death, several companions and other acquaintances of the former Apple CEO spoke up. Among other things, Roger Cheng has a memory from 2007 at CNet divided: When Steve Jobs showed a prototype of the smartphone to a room full of journalists shortly after the presentation of the first iPhone, he was asked about the durability of the mobile phone. Instead of answering, he simply tossed the device in the center of the room. It didn’t hurt and it didn’t go out either - luckily for Apple, anything else would certainly not have given good coverage.