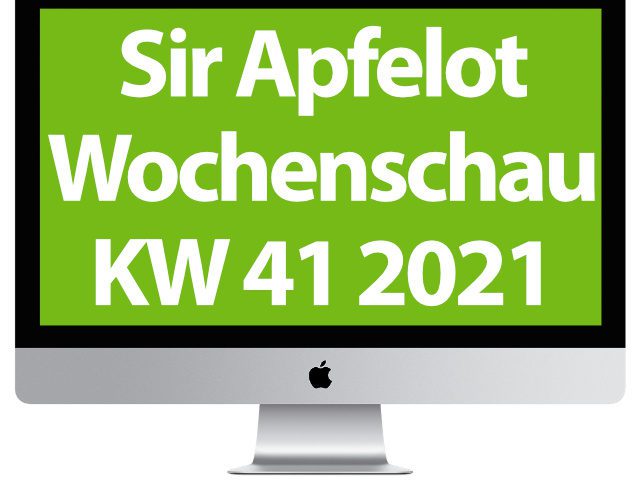 The weekend before the next Apple revelations is just around the corner. Because next week there is already the next special event, streamed live from Cupertino. But before that happens, you will get the latest edition of the Sir Apfelot Wochenschau here. This time I'll show you which Apple and tech news caught my eye in calendar week 41 of the year 2021. Among other things, these messages are included: Meeting the electricity demand thanks to photovoltaics, Internet on the moon, a simulated Mars mission, supply chains susceptible to hacking attacks, Apple actively supports Blender software, Safari in macOS Monterey is being redesigned at the last minute, references to new Nintendo console, and more.

In the Sir Apfelot Wochenschau for calendar week 41 of 2021 you will get the following topics, among other things: Lunanet as lunar internet, photovoltaics could cover global electricity needs, hacking in supply chains, Apple supports Blender, an iPhone with USB-C, possible release period the Nintendo Switch 2, and more.

Apple announced this week that the next special event will take place on Monday, October 18, 2021. At 19:00 p.m. local time, the transmission of the stream starts. In the course of the current week I have already summarized a few information on the topic for you:

In einer Entry the specialist magazine t3n points out that a "international research team“Has dealt with meeting the world's electricity needs using renewable energies. Above all, it is about the generation and use of electricity via photovoltaic systems. "According to this, the global electricity demand could be completely covered“, It says in the introduction. Both the 200.000 km are included in the investigations2 global roof area as well as positions of the sun at different latitudes have been taken into account. Overall, if all roofs were fitted with photovoltaic systems, it would be possible to generate up to 27 trillion kilowatt hours per year. The feasibility are z. B. high prices for solar panels, their installation and the required electricity storage in the way.

Internet on the moon: Lunanet for better data transfer

Let's come from the sun and the earth to the moon. NASA probably wants to go there again in the foreseeable future. So that data for communication, navigation and measured values ​​can be transmitted faster and more reliably, an Internet connection should be established - according to one, the name of the network should be Post from Golem "Lunanet“Read. It should also enable earth-independent navigation on the moon, so that no "Space relay or a ground-based antenna on earth“Must be used. Further details and usage examples can be found in the linked source. Hopefully the Lunanet cannot be hacked.

Mars mission started - as a simulation on earth

There was also one at Golem this week Items via a simulated Mars mission. This is on October 11th "in an Israeli crater“Started as they say. However, there is no space organization behind the experiment, not NASA or ESA. The simulated visit to Mars by six people was initiated by the Austrian Space Forum (ÖWF). "Their team wants to deal with the practical aspects of a future Mars colony", is it [called. Possible problems should be identified and the necessary solutions found so that there are fewer disruptive factors in a real Mars mission or certain aspects that are still unknown can be taken into account.

Supply chains could increasingly become the target of hacking

With reference to the insurer Allianz, heise online shows in one Post that supply chains in trade and industry are currently not only grappling with delivery problems, but could increasingly be the target of hacking attacks in the future. "Companies that deliver essential goods for the economy and society are among the most vulnerable targets, according to the Allianz industrial insurer AGCS"Is summarized in the linked source. IT service providers who provide software and infrastructure for companies in the above-mentioned areas are also seen as further potential targets. But not only the hacking to extract sensitive data becomes a problem, but also and above all ransomware. In other words, malware that paralyzes the system and only releases it again in return for a ransom payment (if at all).

I already introduced Blender to you in February along with other apps for 2D and 3D animation: 2D animation on Mac and PC - 5 free apps in comparison. The free app was already running on the Mac at the time, but is only now actively supported by Apple. This is reported by MacRumors, among others Post . It says, among other things (translated): "In addition to a contribution to the development fund, Apple will provide Blender and its broad developer community with technical know-how and additional resources to support Blender artists and developers". Blender can also be used to create 3D objects or develop 3D scenes. There are many examples of this on YouTube.

macOS Monterey: The favorites bar in Safari moves back over the tab bar

Shortly before the public launch of macOS 12 Monterey, which was announced in June at WWDC21, there is now the tenth beta version for testers and developers. A change that is important for some users has been made in the Safari web browser. To the discomfort of some people, the favorites bar with the names of the favorite websites had moved under the tabs of the open websites. Apple has now corrected that and moved the bar back to the old place above. You can find a comparison of the designs in one Post from iFun.

Engineer Afrooz Family back at Apple - hope for the HomePod?

With reference to a Bloomberg report, 9to5Mac shownthat the engineer Afrooz Family was hired again by Apple. He already worked for the apple company between 2012 and 2016, but has meanwhile helped to set up the audio startup "Syng". This produces interestingly designed audio accessories. Afrooz Family is supposed to lead the work on HomePod models and bring a breath of fresh air to this product. The regular HomePod was last discontinued and currently only the HomePod mini is available. Apple is still working on a medium-sized model and an Apple TV-HomePod combination, i.e. a kind of soundbar with streaming technology.

Apple is vehemently opposed to a USB-C port on the iPhone. It is currently rumored that in the future the smartphone will rather be without any slot than that it will be changed to the universal interface. Ken Pillonel from Switzerland now wants to show that it is possible with the technical knowledge and the necessary technical skills to equip an existing iPhone with USB-C. In a first Teaser on YouTube he shows his modified iPhone, which not only charges via the USB-C port, but can also transfer data. In the video, more videos are announced with explanations of the steps involved. I found out about it . at Golem.

Less than two years: Nintendo Switch 2 should be on the market soon

At Play3 this week they referred to “NateDrake”, which was mostly well informed about Nintendo things. In the corresponding Post indicates that Nintendo's next console could be unveiled in late 2022 or early 2023. At the same time, there are also rumors that the one presented in July Nintendo Switch OLED version could come up with an update with 4K resolution (which is unlikely due to the lack of hardware updates). But maybe that will only apply to the upcoming console, which could be called Nintendo Switch Pro or Nintendo Switch 4K. In any case, a performance update must come with this. There is more information on the subject in the linked source.