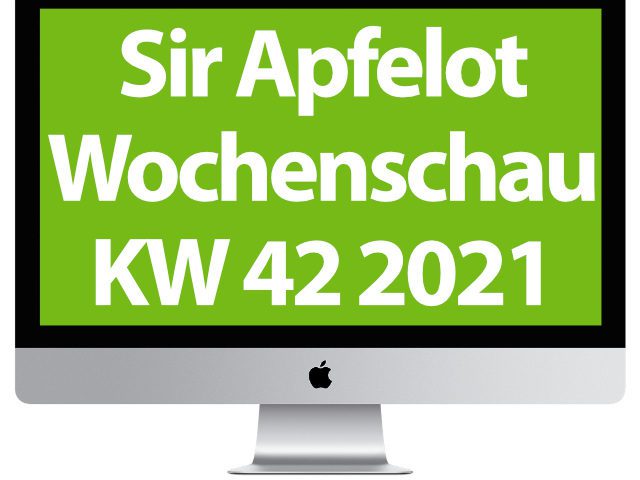 What a week… On Monday, Apple only needed 50 minutes to present not only two new models of the MacBook Pro in addition to the AirPods 3, but also two new chips. The "M1 Pro" and "M1 Max" systems set new standards in the field of mobile computers for professional users. But before it comes down to it, first of all welcome to the new Sir Apfelot newsreel! Today I'll show you the Apple and tech news that caught my eye in week 42. Among other things, these messages are included: Use of wind energy in cities, Facebook and the Metaversum, Among Us on other consoles, and much more!

In the Sir Apfelot weekly newsreel for calendar week 42 in 2021 you will find reports on the new Apple products, Open Parliament TV, wind energy in cities, Dropbox Replay, VIRUP, Among Us and more!

I don't want to dwell on this topic for long, because we have published plenty of articles on the individual topics since the Apple October Keynote 2021 on Monday. From technical data and configuration options to other considerations, you can find everything in the following list:

Small wind turbines in a partition or privacy screen that provides shade could promote the use of renewable energies in cities. Like t3n in a current one Post shows, the designer Joe Doucet from the USA has developed such a wall in which several turbines rotate in the wind and generate electricity. With the appropriate capacity, a model 2,5 meters high and 7,5 meters wide could meet the needs of a household. "The energy obtained in this way can then be stored in a battery, for example, which is located on the house wall. It should also be possible to feed the electricity into the grid“, It says, among other things, in the linked post.

Among other things, because of the concentration on a so-called "metaverse", but probably also because of the meanwhile bad reputation of the name Facebook, the Zuckerberg group should consider a new name. The names of the individual offers - Facebook, Instagram and WhatsApp - should remain the same. The new plans should only affect the parent company, similar to what Google has shown with the creation of "Alphabet". The Facebook name change, which is expected for the coming week, is also intended to initiate a Metaversum project through which a version of the Internet that is accessible in VR and AR is to be created, including 10.000 jobs in Europe, such as The Verge berichtet.

Whether it's a YouTube channel, a university project or a larger production: Dropbox Replay is a new way of easily sharing videos via the Dropbox cloud, adding comments and marking, and, by and large, as a team from different locations on a video or to work on a film project. "If enough feedback has been received, it can be implemented and a new version of the video uploaded for the next feedback round“, It says in one Items from iFun, which is about the current beta. A free account is sufficient for sharing videos, team members do not need their own account to collaborate.

Explore the universe under Windows and Linux: VIRUP for VR and screen

VIRUP (The Virtual Reality Universe Project) is the name of a software developed in Switzerland for Windows and Linux, with which the previously researched universe can be explored. "It renders the respective view of the universe in real time from the earth, over our solar system up to whole groups of galaxies“, You can in one Post read online at heise. According to the source, the many terabytes of data required for this come from ESA's Gaia mission, among others. VIRUP is an open source project for which you have documentation and installation aids with this link place.

I also have one at heise online in the middle of the week Items found on Open Parliament TV. This is a search engine that makes Bundestag debates and the corresponding speeches searchable by keyword. The texts found are linked to the respective videos, so that the debates and speeches can also be viewed. Content will be available back to October 2017; then the logging started in machine-readable form. The source worked on the project after 15 months. You can check it out here: https://de.openparliament.tv/

Have you ever heard of the “VideoPad”? That should be the successor to the Apple flop called "Newton MessagePad" from the 90s. The Apple VideoPad should have two screens, a camera, loudspeakers and a microphone so that it could be used for video conferences, among other things. Corresponding prototypes were tested between 1993 and 1995, all under the then CEO John Scully. But when Steve Jobs rejoined the company and took over, he eliminated the project. A VideoPad prototype (with only one screen) is now to be auctioned on November 3, 2021. Details and pictures are all in one Post by MacRumors.

Among Us on Xbox and PlayStation: the release date has been set

Among Us is a game from 2018 that didn't get that much attention at first, but became a hit among online multiplayers during the Covid-2020 pandemic that continued in 19. After the iOS, Android and PC releases, Among Us came to the Nintendo Switch last year. In addition, a release for the Microsoft Xbox and the Sony PlayStation was announced. It took a while, it seems. Because like The Verge berichtet, Among Us is not coming to Xbox One, Xbox Series S / X, PS14, and PS2021 until December 4, 5. But at least there is now a date and with it the anticipation of cross-platform fun in the Christmas season.