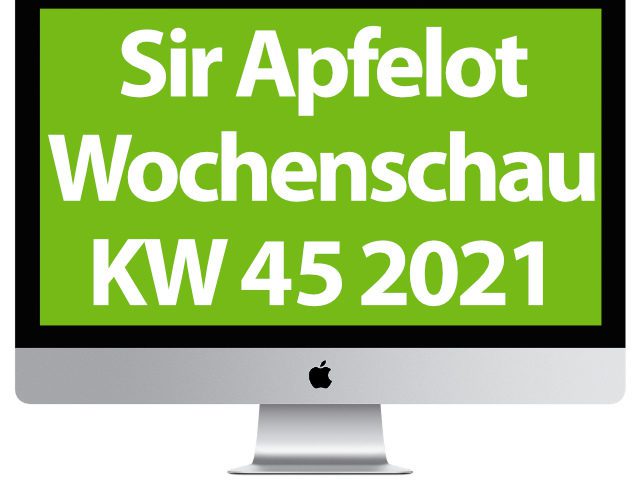 Did you know that there was already a Amazon promotions page for early Black Friday deals gives? But if you are not looking for cheap Christmas gifts yet, I have the new Sir Apfelot newsreel for you here. This time I'll show you which Apple and tech news I noticed in calendar week 45 of the year 2021. Among other things, these topics are included: Cyber ​​criminals blackmail MediaMarkt and Saturn, jailbreaking the PlayStation 5, scapegoat for the "chip crisis" found, German data queries from Apple, background to the "Shot on iPhone" campaign and much more.

In the Sir Apfelot Wochenschau for calendar week 45 of the year 2021 included: ransomware attack on MediaMarktSaturn, PS5 jailbreak by hackers, shot on iPhone, drone patents from Apple and more.

Ransomware attack on MediaMarktSaturn led to restrictions in the markets

An "encryption trojan" has, according to one Post im Spiegel, the stores hit by MediaMarktSaturn. The report refers, among other things, to the company spokeswoman for the Markets Group, who confirmed that there was a “cyber attack”. This brought 3.100 servers to a standstill and in some markets meant that various tasks could not be performed. For example, in some cases no sales documents could be issued (but that didn't seem to be a general problem). The online shops were meanwhile not affected, it said. In the linked source as well as in one Follow-up article Basic Thinking provides more facts and figures on ransomware attacks on companies.

There was one on the PlayStationINFO site this week Post , in which you can rely on a Tweet obtained from @ fail0verflow. According to this, the corresponding hacker group succeeded in extracting the symmetrical root key of the current Sony video game console "PlayStation 5". This makes it possible - at least in theory - to use exploits to run unsigned software on the PS5. This means that your own programs and emulators could be executed with pirated games. In addition, the hardware could be used for completely different systems and programs. Whether or not this is seen as necessary by someone is of secondary importance. It is currently interesting that the jailbreak as such was successful.

The scapegoat for the chip shortage: Texas Instruments

The increasing demand combined with the ongoing Covid-19 pandemic has led to a shortage of chips in the tech industry. The PlayStation 5 is often taken as an example, or the iPhone 12, which was sometimes only available two months later than usual. As a Post von WinFuture now shows, however, that the delayed production and delivery of devices should not only be due to high-end chips and their scarcity. Rather, it should be "Analog ICs, i.e. chips that contain analog circuits“, Lack. And most of these come from Texas Instruments (TI). It is said that TI should not expand its production facilities, have long delivery times and not meet deadlines.

Government data requests from Apple: Germany in first place in the second half of 2020

If governments and their authorities take action to prosecute or have serious suspicions, they can request certain data from companies about suspicious customers. This is also possible with Apple. In this regard, Apple repeatedly publishes a transparency report that shows which states are making how many inquiries. In one Post Caschy's blog showed this week that Germany made the most inquiries in the second half of 2020: 16.819. The USA is in second place and China in third place. Interesting here: the numbers rose from 2 in the previous year to 3. You can read the report yourself with this link.

Apple is rowing backwards: display repairs on the iPhone 13 should no longer affect Face ID

How shown last week, for example, repairs to the display of the iPhone 13 or the replacement of the panel by independent workshops resulted in the Face ID function of the device being deactivated. For users, this meant that they should only have a display replacement carried out by Apple or appropriately equipped workshops. Workshops tended to have to equip themselves with special equipment. But this should now be prevented by a software update of the Apple smartphone, berichtet MacRumors. Because Apple probably had an understanding and does not want to deactivate Face ID in the case described.

How the “Shot on iPhone” campaign came about

"Shot on iPhone" is, among other things, the title of some YouTube videos published by Apple, but also a Hashtag, which is used by users on social media to highlight photos and videos taken with the (each new) smartphone. The campaign, which has been running since 2014, can therefore be regarded as a success, since not only are the commissioned works by Apple used as advertising, but also Apple's customers voluntarily advertise for Apple and Apple by displaying and naming their own works make iPhone. The Macer head shows how the simple idea of ​​the campaign came about Post on - with reference to a Articles by Adweek.

Patently Apple is a great resource for finding out about Apple patents. A current one Post shows three patents that describe an "unmanned flying object" (drone) as well as its properties and functions. Various details are discussed and sketches from the relevant documents are also shown. It is also noted that Apple apparently wanted to keep its drone plans secret to a certain extent. Because before the patent applications were filed in the USA, they already existed in Singapore, where it is rather unlikely that anyone would research in this direction. But Patently Apple is on the trail of the Cupertino company.