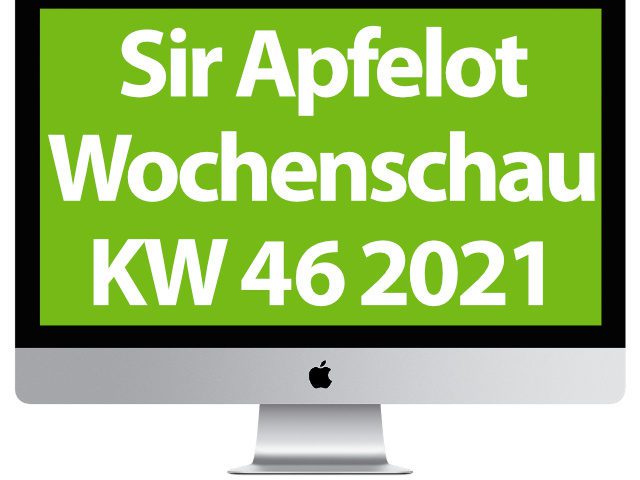 There is another Sir Apfelot newsreel here today before we start the week of Black Friday. You can already find the first deals and offers in this overview from Jens: Black Friday & Cyber ​​Week Deals 2021 - my (almost) complete list. Below is the Apple and tech news that caught my eye in calendar week 46 of 2021. Among other things, the following topics are included: illegality of data retention, Barbados with Metaverse message, Russian satellite waste in orbit, removal of microplastics, Apple's 5G chip, glass housings for devices, self-driving cars and more.

In the Sir Apfelot newsreel for calendar week 46 of 2021 you will find the following topics: illegal data retention, Spotify lyrics, Barbados embassy in the Metaverse, Russian satellite waste, microplastics in sewage, Apple Mail and more.

The German model of data retention is illegal

"An expert from the European Court of Justice put a severe damper on the data retention process, which had been put on hold in Germany, and strengthened the position of civil rights activists“It says in the introduction to a current issue Articles by t3n. In detail, it is about the review of the German model of data retention by Manuel Campos Sánchez-Bordona. This was preceded by a legal dispute between Spacenet, Telekom and the Federal Network Agency. The new report at EU level may mean that the storage of data without cause will now be completely obsolete. That would be very welcome.

So far only "available in 28 markets"Was the" Spotify Lyrics "feature. Like the provider for music streaming and podcasts now announced has made it possible to display lyrics anywhere in the world. That's why they teamed up with Musixmatch. In the linked source, Spotify shows, among other things, how users can call up the lyrics of the songs they are listening to in the mobile app, with the desktop app and on TV. A footnote states that the Spotify Lyrics function is also available on PS4, PS5, Xbox One, Android TV, FireTV, Smart TVs and Sky.

The topic of metaverse or metaverse has been on everyone's lips since the Facebook group was renamed “Meta” and the official announcement of the company's intended virtual world. I have already summarized what a metaverse is and which examples have already existed in the last 40 years: What is a metaverse / metaverse? - In a Entry I have now read from t3n that the island state of Barbados is planning its own virtual embassy, ​​which should be in Decentraland (or possibly another metaverse) from 2022. This would make the state the first to recognize a digital, sovereign country and, as a result, probably set further precedents. There is more information in the linked source.

Russia has tested a satellite defense missile on its own orbit object, the Cosmos-1408. The "successful" kill in the narrower sense has some negative consequences. Because the destruction of Cosmos-1408 resulted in several hundred rubble, which, among other things, endangered the international space station ISS. The astronauts at the station have meanwhile been instructed to close hatches and prepare for emergencies. Heise online summarizes details of the launch and its consequences in one Post together. It also names companies and nations that have already expressed criticism of the incident. It is also pointed out that China is not one of them.

Microplastics should look like popcorn so that they can easily be fished off in sewage treatment plants. There is currently an updated version of this at heise online Post . It is about the Greentech start-up "Wasser 3.0", which has developed the liquids necessary for the process. It's a hybrid silica gel that bundles and sticks together microplastic particles so that they end up looking like large pieces of popcorn. "This microplastic popcorn floats on the surface of the water and can be easily fished off with a sieve or vacuumed from the surface“, It says in the linked source. There you will find further details on the topic, e.g. B. that 2.000 milliliters of hybrid silica gel are sufficient for 50 liters of water.

With the operating systems macOS 12 Monterey, iOS 15 and iPadOS 15, there is a security function in the mail app that prevents your own location from being revealed through a sent e-mail. It also makes it more difficult for senders to find out whether the email they have sent has been opened and read. According to the systems mentioned, these features for more data protection in the e-mail area are only available on the Mac, iPhone and iPad. Like MacRumors now in a Entry shows, the handling of e-mails via the Apple Watch can destroy all protective measures. Because the Mail app on the Apple Watch reveals the actual IP address when information is downloaded.

Three other articles from MacRumors also caught my eye. in the first it's about Apple developing a 5G chip that will be used in the iPhone from 2023 onwards apart from the in-house A-SoC. This means that in 2022 there should be the last iPhones with Qualcomm chips installed. in the second The article is about iPhones and other Apple devices that, according to a patent, could be completely encased in glass. The sketches also show opening mechanisms which would allow repairs. In the from drita The source of this paragraph is about an Apple Car without a steering wheel and pedals that could hit the market in 2025. In doing so, reference is made to Bloomberg information, among other things.

Self-service repairs - Apple customers should be able to repair themselves

On Wednesday, Apple published a press release, quite surprisingly, in which the "self-service repair" program was announced. This is to be rolled out first in the USA and then in other regions in the coming year. At the beginning, spare parts, tools and instructions for home repairs on the iPhone 12 and iPhone 13 are to be made available. Kits for repairing M1 Macs will also follow later. You can find a single post on the topic here in the blog for two days: Self Service Repair - Apple provides parts and guides for customers.