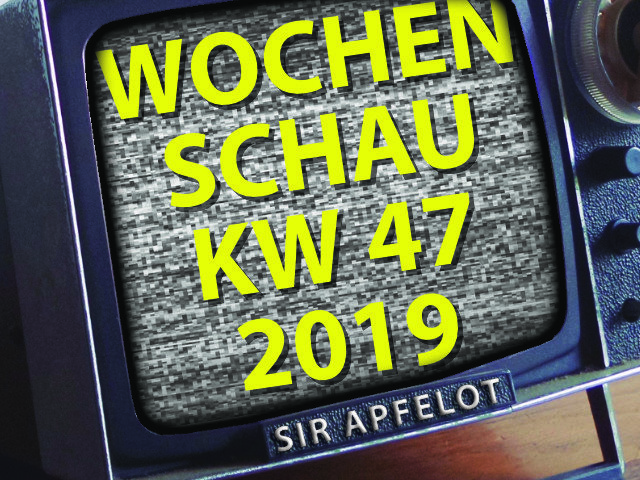 Only one month left and all Christmas shopping should be done. If everything is planned for you in this regard, you can also sit back and read the current Sir Apfelot newsreel first. In the following, I present you the Apple and tech news that caught my eye in calendar week 47 of 2019. Among other things, these topics are included: Telekom and Huawei, Google Stadia with hardware problems, serious security gaps on Android smartphones, AI-supported advertising on Facebook and Apple with new technology, new location, new event and new cellular network in 2020. 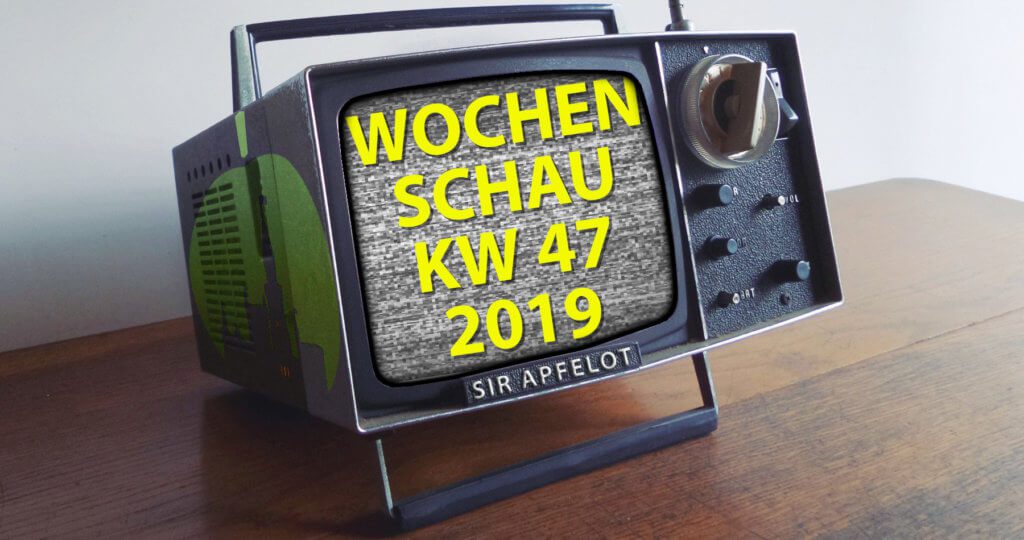 In the Sir Apfelot Wochenschau for calendar week 47 in 2019 there is, among other things, the following: Google Stadia is breaking hardware, Telekom is throwing out Huawei, Facebook wants to advertise more efficiently, Apple is bringing new technology, has a new location and is hosting a new event.

Telekom wants to remove Huawei technology from its core network

Deutsche Telekom is planning various sources to exclude Huawei hardware from its core network. Over a period of two years, the manufacturer will also, and above all, act without the manufacturer with regard to the 5G expansion. Last but not least, the current US embargo against the technology manufacturer from China is causing Telekom to no longer use Huawei's products for its own network expansion or to remove them from the current network. For example, the specialist magazine t3n reports at this point; but also with the statement by Telekom that the technology is exchanged every few years and that it is normal for Huawei to move away from it.

T3n has also discovered an Android security hole in the last few days berichtet. At least on the devices from Google and Samsung, the weakness of the system is said to have led to hackers potentially having access to the camera. Other apps could also have been used to make and forward image and sound recordings of the environment. The manufacturers mentioned have already reacted to the error and released an update for their camera apps. It is not really clear whether other affected manufacturers have also issued a fix. Interestingly, according to the report linked above, security researchers were able to use a weather app as a proof-of-concept for camera access.

Using machine learning, it should be possible to tailor advertising on Facebook even better to the target group or to people (groups) addressed individually by the advertiser. The AI ​​should be able to change formats, texts and even the entire language of the display. Again on the t3n page I have a corresponding one Entry found. Depending on the preferences of the individual users, individual advertising formats can be displayed - images with captions, videos, pure texts, etc. In addition, the individual text elements (headline, image descriptions, etc.) should be adapted to the viewer. Automatic or manually stored translations lead to an expansion of the target market or to the individual addressing of several nationalities in a limited area.

With “Stadia”, Google recently launched its new video game streaming, with which games calculated on servers can be played in real time on various end devices. While the service itself works, the hardware is quickly overwhelmed by the relevant users. So there is, according to WinFuture several messagesthat the Google Chromecast Ultra is overheating while playing. The heat development is so strong that the device fails to work. The English source Android Central berichtet meanwhile, that the “Claw” bracket, with which the smartphone can be attached to the Stadia controller, can damage the same; at least visually.

The developer "Rambo" (Guilherme Rambo) is not only for its practical apps - z. B. the WWDC app - known. But also for pulling out one or two secrets from the beta versions of operating systems. To do this, he is experimenting with the pre-release versions of iOS and macOS, among other things. IFun shows an overview of the discoveries made so far and an unpleasant development here. on. The development is that Apple has closed the "Rambo" developer account, which has been active since 2008, without giving any reason. Among other things, this means that he can no longer update his apps. You can find his blog post on the topic (in English) with this link.

MacBook Pro 16 ″ with a new sensor on the folding hinge

To better determine the position of the MacBook display, the new MacBook Pro with 16-inch screen a new "Lid Angle Sensor" installed. This is what iFun, for example here. with reference to iFixit. The fact that a sensor is used to detect the opened or closed status of the MacBook lid is nothing new. However, this is a new, more precise type, which should recognize even better whether and at what angle the Apple laptop is opened. This enables more precise functions such as dimming the display lighting, transferring the image signal to an external monitor and so on. With reference to MacRumors, where technician documents are available for the sensor, it says: "Interesting is [...]that service technicians have to recalibrate both the sensor and the screen themselves after repairs."

"Loved by millions. Created by the best. ”- This is the heading for the upcoming Apple event, which is to be held on December 2, 2019 in New York. It should start at 16:00 p.m. local time, i.e. 22:00 p.m. German time; whether a live stream will be provided is questionable. The berichtet including app risks. Apple's favorite apps and games are to be recognized at the event. So it won't be about new hardware or an update to tv + or Apple Arcade. The focus is likely to be on developers and their creations - what exactly will look like is still unclear. Invitations shared on Twitter about the event were what drew media attention; because an official special page on the Apple homepage does not (yet) exist.

Apple is expanding its Anyone Can Code program

With “Anyone Can Code”, Apple launched a program for teachers and students to teach and learn to code. The new program for elementary and middle schools "includes even more teacher resources, an all-new student manual, and updated Swift Coding Club materials“, It says in the Official press release from Apple. And further: "Already today, millions of students in more than 5.000 schools around the world are using the Everyone Can Program program to bring their ideas to life and develop key skills such as creativity, collaborative work, and problem solving.“- the page about the program you can find here.

Apple wants to expand its Texas location with a new campus. The new company buildings are scheduled to open in 2022 and will initially accommodate 5.000 employees. However, there should be opportunities to employ up to 15.000 people at the location. MacRumors shows that all in one Post on. The campus is to be built in Austin and 60% of the property is to be used for landscaping and greening. Another one Entry shows that Apple CEO Tim Cook is proud that the new Mac Pro is made in Texas. The assembly of the most powerful Mac to date will also take place in the Austin facilities.

With an improved antenna design, Apple should bring out iPhones with 5G compatibility in the coming year. That shows 9to5Mac as a rumor at this point on. However, the assumption that the iPhone models will be able to communicate with 2020G cellular networks in 5 is no coincidence, but comes from the analyst Ming-Chi Kuo, the "Apple Oracle". It is assumed that Qualcomm modems are used. In addition, LCP antennas (Liquid Crystal Polymer) should ensure that radio can be transmitted reliably. Why the LCP technology should also prevail in iPhone sales is also shown on the basis of Kuo's statements in the linked article.