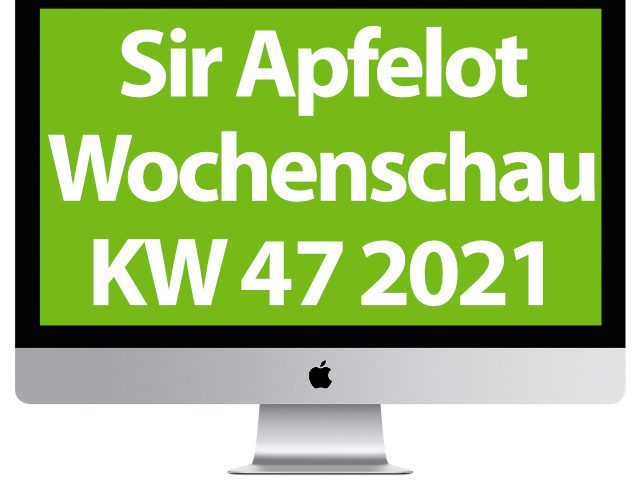 For today's Black Friday 2021 there are not only cheap products in abundance, but also a Sir Apfelot newsreel again. This time I'll show you what Apple and tech news I noticed in week 47 of this year. These are some of the topics that are to be dealt with today: Money back with slow internet, interesting results from Mars experiments, European moon walk, update on the “cyber bunker”, Apple's crackdown on espionage software, the 1988 “WristMac” smartwatch was auctioned , and a lot more.

The Sir Apfelot weekly newsreel for calendar week 47 in 2021 is about these topics, among other things: money back when the internet is slow, simulated Mars missions, the cyberbunker trial in Traben-Trarbach, Apple AR headset, and much more!

Slow Internet - Your money will be returned from December 1st

Like, among other things, t3n in one Post shows, payments to Internet providers can soon be reduced if they do not meet their tariff promises. "If the internet connection at home is slower than agreed with the provider, customers do not have to pay the full contract price“, It says with reference to a change in the Telecommunications Act. However, you should not write the letter of complaint directly, but first check whether there is a mistake on site. Which local conditions affect internet use can be found in the linked source. There you will also find the details of compensation in the event of a complete internet failure.

I also have one at t3n Items found that should be interesting for gamers. It is about the “PlayStation Online Network Emulated” fan group, or PSOne for short. This emulates servers that can be used to play the game Motorstorm online with others from the Sony PlayStation 3. The game is an off-road racer. Before this, PSOne had already made other PS3 games playable online again, as t3n shows. The next project should be "PlayStation Home". With a view to the current metaverse trend, it could be that Sony is asserting its trademark rights and taking action against it.

Before we switch to other sources, let's stick with t3n for a moment. There were several reports on Mars this week. At the start of a Mars simulation in October, we have already reported at this point. A result from such simulations will now be here In summary: People in a simulated Mars mission communicate their needs and problems less over time, only pass on the most important information to their superiors and become increasingly rebellious. More details in the source. Just like this one headline: "Mars: Ancient lava flows discovered deep below the surface“- Information about the formation of the earth should also be able to be drawn from the discovery.

European walk on the moon before 2030

Let's stay away from Earth for a moment. Because how hot online in one Entry reports, the European Space Agency ESA is supposed to take over the American NASA "in a crucial way“Support in lunar missions. It is therefore quite possible that European astronauts will also be there for the next moon ascent, which is to take place before 2030. You can find details on this and corresponding statements by ESA boss Josef Aschbacher in the linked source.

After a long investigation, there was a police search of the old bunker in Traben-Trarbach in September 2019. We have reported on the topic several times, including at this point. Now there is information from the corresponding process. How hot online shows, high sentences are demanded for the people who z. B. have promoted illegal darknet activities. "All eight defendants were guilty of forming a criminal organization and aiding and abetting tens of thousands of crimes committed by their customers through illegally hosted websites [...] “, it says with reference to the Chief Public Prosecutor Jörg Angerer.

The (state) surveillance of communication devices can be dangerous for activists, journalists and many more. Accordingly, Apple now wants to take action against the use of spyware, including on the company's own iPhones. This is the headline of the company in a current issue press release: "Apple is suing NSO Group to limit abuse of government-sponsored spy software“- It is also mentioned that measures against cyber surveillance are supported with 10 million US dollars. At the same time, reports came up this week according to which Apple warns individual activists or groups about espionage software: for example here at heise online.

Auction of WristMac, a smartwatch from 1988

The so-called WristMac ("wrist Mac") is a watch that was brought to market in 1988 by Seiko and Ex Machina Inc. The watch also included software for the Apple computer that was supplied on floppy disk. The watch, more or less a smartwatch, could be programmed and connected to the Mac, for example to save phone numbers, set alarms and exchange notes as text files. In 1991 the whole thing was even used by NASA in the space shuttle "Atlantis". More details, a picture and information about the auction this week can be found in one Entry by MacRumors.

Apple AR headset should appear in 2022 with "Mac-like performance"

With reference to the often correct Apple analyst Ming-Chi Kuo shows MacRumors in another Items new rumors about the augmented reality headset from Apple. Accordingly, this should appear at the end of 2022 and not necessarily have to be coupled to a computer, but rather be able to do extensive calculations yourself. The main processor or SoC that is supposed to be used for this is probably similar to the Apple M1. However, this should not have to handle all processes. A co-processor should take care of the accumulating sensor data. Further details can be found in the linked source.