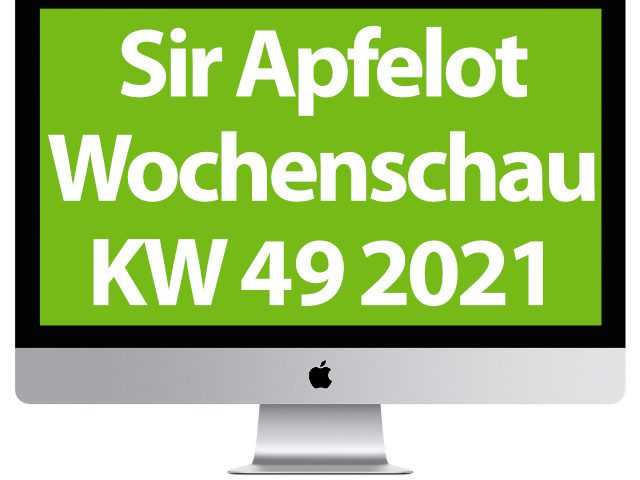 We are making great strides towards the end of the year - and like every Friday, your loyal companion is Sir Apfelot Wochenschau. In this issue, I'll show you which Apple and tech news I noticed in week 49 of the year 2021. Among other things, these topics are included: Learning to program with the elephant, new things about cell broadcast, Problems with SD cards in current MacBook Pro models, possibly soon new iPhone SE models, new Apple app for classical music, and more.

The Sir Apfelot Wochenschau in calendar week 49 of 2021 offers you the following topics: Learning to program with the elephant, cell broadcast, problems with SD cards in the MacBook Pro 2021, new iPhone SE models, new Apple app for classical music, and more.

WDR offer: Learn to program with the elephant

Learn to program without reading long explanations or having to memorize technical terms - that is exactly what is possible thanks to the “Programming with the Elephant” offer. The free app from WDR is intended to give four to seven year olds their first programming skills. "There are also educational games for children to download from programmieren.wdrelefant.de that can be used in families, daycare centers and primary schools“, It says, among other things, in one Post from iFun.

Without app and internet: warnings via cell broadcast

In the aftermath of the flood disaster in summer 2021 and also with a view to the not always perfectly functioning warning apps NINA, KATWARN and Co., the “cell broadcast” model was recently brought out again. Cell phone owners in affected cell phone zones receive the relevant warnings via SMS. The important information does not require any prior installation of an app or a connection to the Internet (WiFi or mobile data). The system called “DE-Alert” and the possible guidelines for it from the Federal Network Agency are accordingly up-to-date Theme with the iPhone ticker.

The new MacBook Pros were long awaited by fans of the laptop series and, in addition to a new top performance in the mobile Mac area, should also score again with more connections. Thunderbolt 4 in USB-C design is now back with an HDMI port and a slot for SD cards. I have already summarized the first criticism of both here: MacBook Pro 2021 - Details on SD slot and HDMI port. New articles on the topic - including at MacRumors (English) and iFun (German) - also show that the SD reader can cause even more problems: slow recognition of the card, slow reading times, slow ejection, etc.

Repair history of the iPhone available from iOS 15.2

Since December 8st 2021 there is a Support document from Apple, which informs about a new feature of the iPhone from iOS 15.2. Under Settings -> General -> Info, under the heading "Parts and the service history", certain components and their reference can be determined. Whether it is an original Apple component or a third-party replacement, it can be seen quickly and easily. Depending on the iPhone generation, different components can be checked - the linked source states:

In the linked support document you will find further information, notes and related screenshots.

Regarding Ming-Chi Kuo gives MacRumors in a current one Post Information on any iPhone SE models that may appear in the future. According to these, the cell phone planned for 2022 should have 3 GB of RAM. The iPhone SE for 2023 should be considered with 4 GB of RAM and a larger display. According to further information, including from Ross Young, there should then be a SE successor in 2024, which should have a display diagonal between 5,7 and 6,1 inches. In the linked source you can find more information and links to posts that deal with further iPhone SE rumors.

Apple gives users of current iOS versions the choice of whether they want to be tracked by apps or not. Most of the time, when you open an app, you are asked whether it is allowed to record the relevant data, and then you can change the decision in the settings. MacRumors now shows that the regulations in the background are so loose that some app offers continue to track even after a rejection Post on. According to a report named in the article, the major providers in particular - namely Facebook (Facebook, WhatsApp, Instagram) and Snapchat - should disregard the users' opt-out.

Apple Music for classical music thanks to Primephonic purchase

Finally, a message for friends of classical music: Like MacRumors again shows, Apple is supposed to be working on a new music app for classical music. For this purpose, the provider Primephonic has already been bought up and a corresponding position advertised. The new app is expected for 2022 and should adopt the well-known Primephonic design. The music library and filter options tailored to classical music are to be supplemented by audio features from Apple, such as lossless and 3D audio. You can find more details on the topic in the linked source.

And with it a nice weekend as well as a contemplative third Advent! :)