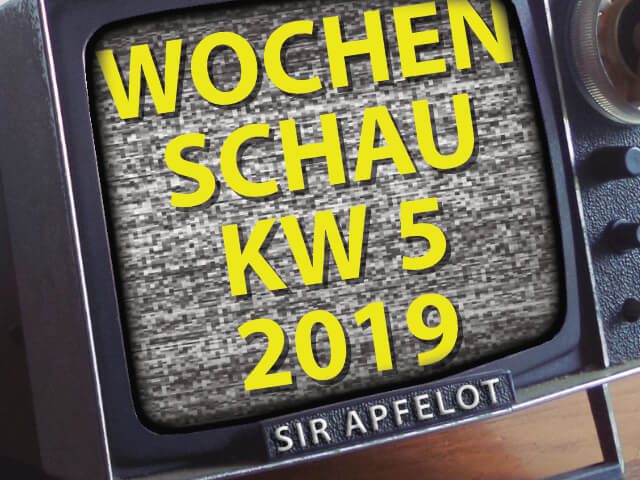 January came to an end and brought some interesting Apple and tech news with it in the last few days. That is why there is enough material for the Sir Apfelot newsreel on Friday. In the following paragraphs I would like to show you those posts and messages that caught my eye in calendar week 5 of 2019. Also included are Sport1, the Samsung Galaxy S10, a new type of lamp from Dyson, Intel with a folding phone patent, Minecraft and of course a lot of Apple. From new iPads and iPods to FaceTime to the upcoming video game subscription, everything is included! 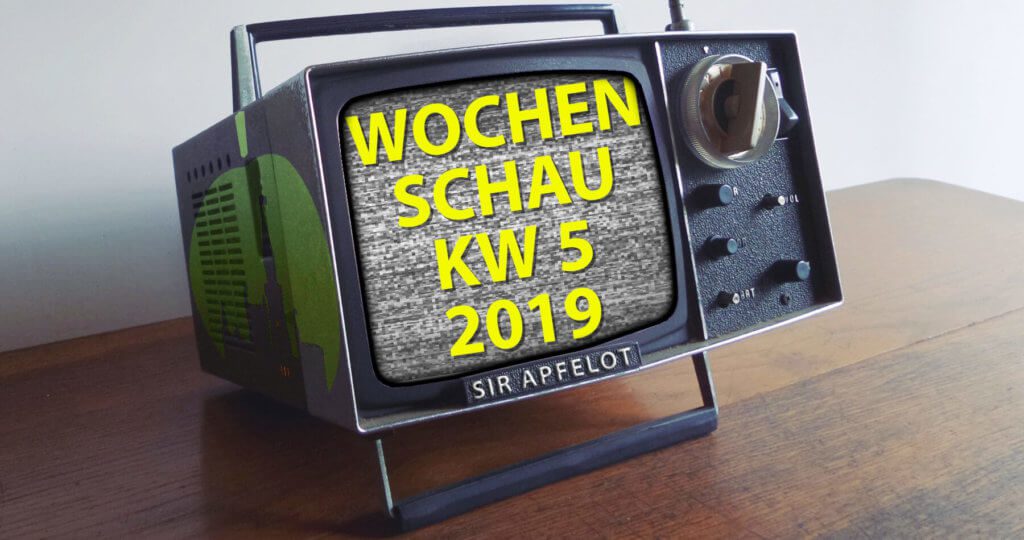 Sport1, the Samsung Galaxy S10, a new type of lamp from Dyson, Intel with a folding phone patent, Minecraft and lots of Apple can be found in the Sir Apfelot newsreel for calendar week 5 of 2019.

February 1st: The "Change-Your-Password-Day" and opinions about it

Today, February 1st, 2019 is Change-Your-Password-Day again, on which apparently useful reminders, hints and tips for changing passwords are scattered from many places. Also the Importance of strong passwords with many digits, large and small letters, numbers and special characters is highlighted. Jürgen Schmidt shows at heise (here ) however, has a different opinion and writes: "Put your sermons on password security where the sun doesn't shine!" - because the theft of access data, of which 2,2 billion sentences are currently available on the Internet, does not get through weak ones Passwords enabled. But through the weak security measures of the online services. Ergo, such days of action would only distract from the real problem.

Sport1 is currently boasting of having launched the “first eSports channel on German television”, as well as app risks headlines. It is true that they are only taking on the legacy of GIGA, a show or a broadcaster that was already informative in the late 90s and early 2000s in the field of video games and esports in particular. But with the new offer, Sport1 is riding with extensive resources on a wave that has developed since that time and seems to be breaking into the mainstream. The first broadcast on eSPORTS1 was about the game "Dota 2", a Valve title based on a Warcraft mod. Sport1 provides more information about the start of the broadcast at this point.

Samsung Galaxy S10 - one of the devices with 512GB eUFS

Looking at the new model of the “Galaxy S” series of Samsung smartphones, several sources report on the expected memory chip, a flash memory measuring 512 GB to 1 TB. Among other things, Golem offers a report about that. Samsung will also provide details and areas of application at the in-house website. There is not only talk of smartphones and their storage capacities, but also of the chip's fast read and write speeds, which also make it usable for devices in the field of virtual reality (VR) and augmented reality (AR). Mobile storage with up to 1 TB - this will make SD cards (almost) obsolete in the long run.

Dyson Lightcycle - Cooled LED lamp with a lifespan of 60 years

Like Golem, among others at this point reports, Dyson has introduced an LED lamp with a cooling system. The company, made famous by vacuum cleaners, wants to ensure that the lamp or the LEDs used have a lifespan of 60 years by dissipating the heat from the light source. The name of the lamp is "Lightcycle", an artificial word made up of light and lifecycle. Lighting with 2.700 to 6.500 Kelvin and 100 to 1.000 lux can therefore accompany a person for almost his entire life. Incidentally, the heat is dissipated through a so-called “heat pipe” - just like with the copper pipes used for cooling in smartphones.

Whether it is a Windows phone, an Android device or just a patent that Intel considers passive income - the CPU manufacturer apparently holds the patent for a foldable smartphone including a stylus. The pen could replace the mouse when the small smartphone screen becomes a tablet or laptop display. GameStar, among others berichtet regarding LetsGoDigital about that. The render graphics in the reports, in which it is mentioned, among other things, that the patent dates back to 2017, were made by LetsGoDigital and show what the device could ultimately look like.

The AppleInsider believes that Apple could already expect AR glasses from Apple as early as 2020 Post . In addition, the statements of an unspecified source are listed, according to which Apple had over half a dozen incognito people at CES 2019 who met with AR waveguide suppliers. Among them were WaveOptics, Lumus, Vuzix and DigiLens. This is related to Apple's interest in developing displays that are worn on or on the head. So if the efforts of the Vrvana company, which was acquired in 2017, as well as further research and collaborations bring the hoped-for success, then Apple could soon come up with augmented reality.

Autofill in Safari will soon be possible by fingerprint

As of macOS 10.14.4, users with the appropriate hardware could be able to confirm the autofill in Safari with their fingerprint. The automatic filling in of login fields or forms would be even faster and in some cases more accessible. Among other things, app dangers mention, that. So if you own an Apple MacBook Pro with Touch Bar and fingerprint sensor, for example, you can use this option in the future. At this time, macOS 10.14.4 is only available as a beta for developers.

Either we are in June for the WWDC 2019 or for this year's SeptemberKeynote In addition to new iPhones, new iPad models and, surprisingly, a new iPod Touch are also on the horizon. Apple has reportedly registered seven new iPad models with the Eurasian Economic Commission. Model numbers A2123, A2124, A2126, A2153, A2154, A2133 and A2152 are included, as is Golem here regarding MySmartPrice reported. In the past, such registrations have helped predict future devices. So we can look forward to a number of new devices.

A security risk is said to be hiding in a current FaceTime bug. Such as 9to5Mac shows, callers can see and hear the called party before he or she is accepted. Regardless of the situation, it is always an unwanted intrusion into privacy. However, the magazine appeased at the same time, the bug only appears in the case of illogical behavior: when the caller adds himself to the conversation. This also explains why the bug was probably not discovered in Apple's internal tests. In another Entry on the subject, 9to5Mac shows that the service has now been completely taken offline - until the problem is resolved. When there is the green light again, you will see, among other things apple.com/uk/support/systemstatus/.

According to several reports, Apple is working on a “Netflix for games”. With a video game subscription, Apple would appeal to a large audience and could provide a platform not only for long-established publishers, but also for indie developers. In order for the competition to Steam, Origin, Epic Games, Discord and Co. to pay off, Apple would have to enter the world of gaming with a large partner. Some experts therefore say that Apple should buy Nintendo. Due to the many user channels and devices with macOS, iOS and tvOS, the company is already well positioned to roll out the possible service. Reports on the matter offer among others MacRumors, 9to5Mac and the ARD stock exchange.

"Minecraft meets Atari 2600 - 2600 emulator in the game breaks speedrun world record", headlines GameStar looking at an ambitious block game project whose hype just doesn't seem to be abating. The message is about YouTuber SethBling, who has implemented a working emulator for Atari 2600 games in his Minecraft world. The curse and blessing are one and the same: the games only run with 1 fps. On the one hand, this ensures that speedrun routines can be processed safely and perfectly. On the other hand, there is no real fun to play. That Video on the topic I have embedded you in the following. Have a nice weekend! :)