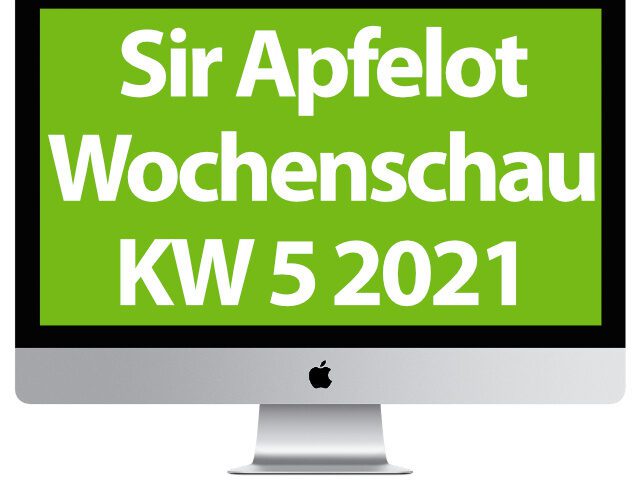 In the calendar there is again a Friday, and with it a new Sir Apfelot newsreel. This week you will again be presented with the Apple and tech news that I have particularly noticed over the past few days. Among the messages for calendar week 5 in 2021 are, for example, the following: E-recumbent bike with a roof, Jeff Bezos is resigning, gaming furniture is now also at IKEA, Big Sur Backups preferably with the old SuperDuper! Version, new for mixed Reality headset from Apple, and more. Also have a look at the Pick of the week past ;)

The vehicle called "Frikar" comes from the Norwegian manufacturer Podbike and is a mixture of recumbent bike, e-bike and mini-car. Because the chainless vehicle not only offers a canopy as rain and wind protection, but also four wheels and two electric motors. It should be available from spring 2021, berichtet including Netzwelt. The maximum speed of the 40 to 50 kg light vehicle is given there as 25 km / h. However, up to 60 km / h can be reached downhill. You can find further information in addition to the source shown on the official website from Podbike.

Jeff Bezos is leaving his CEO position at Amazon

In the third quarter of this year, the founder of Amazon wants to step down from the company's boss position. He then wants to become chairman of the board. Andy Jassy joins as the new managing director. This shows, for example, MacNotes in a Entry on. Bezos wants to use the time gained to deal more with the Day One Fund, the Bezos Earth Fund and the space company Blue Origin. "Perhaps the still-Amazon boss is also planning to go into politics, who knows“, It says in the linked source.

PS5 graphics problems: Fix should be rolled out in March

If you want to conjure up the best graphics on the Samsung television with the Sony PlayStation 5, you may have to deal with compatibility problems. These appear to occur with some users who use the 4K resolution with 120 fps and want to use HDR. Play3 addresses the problem and the update aimed at it at this point a. There it also says that the problem cannot be solved on the Samsung TV or by updating its software. So now you have to wait for the PS5 fix.

Gaming furniture from cooperation between IKEA and Asus

Anyone who works a lot on the computer, plays video games or even works in e-sports not only needs a good computer, but also suitable furniture. That's why IKEA and Asus brought out the Asus ROG furniture collection in the form of a cooperation. An electrically adjustable table with a USB charging port, gaming or office chairs, a roll container for various accessories, and accessories such as a cup holder that can be clamped to the tabletop. You can find all the details in a press release from IKEA (English) or in a corresponding article in Golem magazine (German).

Esports nutrition: better than average (and the stereotype)

Those who gamble a lot only eat pizza, energy drinks and chips? That's not true. How hot online shows, a study shows that gamers often eat better than others. 817 people were interviewed for the study by the Institute for Exercise Therapy and Exercise-Oriented Prevention and Rehabilitation of the German Sport University Cologne. They not only play esports games, but also provide extensive information on their diet, i.e. what they eat and drink. Those questioned were between 14 and 60 years old; among them were 20 active esports professionals. The study showed, for example, that energy drinks are not consumed as often as the sponsorship of e-sports events on the part of the drink manufacturer suggests.

From March, the YouTube app should only be available on the current Apple TV models (HD and 4K), is it [called among others at iFun. This is probably due to the fact that the YouTube version for older Apple TVs is a special solution and not an app that can be downloaded directly from the App Store. But if you still want to watch YouTube videos with old models of Apple's set-top box, you can stream them via AirPlay - for example from your iPhone, iPad or MacBook. You can find more details and background information on the topic in the linked post.

Backup of macOS Big Sur with the old SuperDuper! Version

I also have it at iFun Note found that the developers of the backup software "SuperDuper!" recommend using an older version of their software for the current macOS version Big Sur. The message will be "equally as surrender and success message“Viewed. Because with regard to the blog post by the developer Dave Nanian, to which the message relates, it says: "The workaround is to use SuperDuper! not to use the current version 3.3.1, but to fall back on the older version 3.2.5 of its software.“- The older version does not contain the adjustments that had to be made for Catalina and are no longer used in Big Sur.

Will Hyundai become the new Foxconn?

Like me already shown yesterday the Apple Car is supposed to be based on a Hyundai chassis. "Hyundai or the group subsidiary Kia could act as a partner for Apple's first own car“, It says appropriately in one Post by t3n. However, it also shows that there is probably an internal fear that Hyundai or Kia will become the "Contract manufacturer à la Foxconn“Is demoted. No cars should be made for others. In addition, Apple and Hyundai are two companies that both like to implement their ideas at their own discretion and do not want to be dictated by others. Well, let's see what will come of it.

iCloud keychain can be used on Windows thanks to Chrome

Apple has released an extension for the Chrome web browser from Google with which the password can also be used via iCloud on the Windows PC. This is indicated, for example, by MacRumors with a Entry down. The extension is simply called “iCloud Passwords” or “iCloud Passwords” and brings the passwords saved in Safari on the Apple device to Chrome. The Chrome Web Store currently lists over 40.000 users, who, however, have left average / bad ratings on average. You can have a look here.

Also at MacRumors I have the last one Entry discovered for this newsreel. It is once again about the headset that Apple expects with functions around augmented reality (AR), virtual reality (VR) and / or mixed reality. This could appear next year and have interesting specs. With reference to a source close to Apple, an 8K resolution, over a dozen cameras for environment and hand recognition as well as eye tracking are named as features. The price apparently discussed internally is around $ 3.000. This means that the Apple headset would compete in the price range of Microsoft's HoloLens 2.