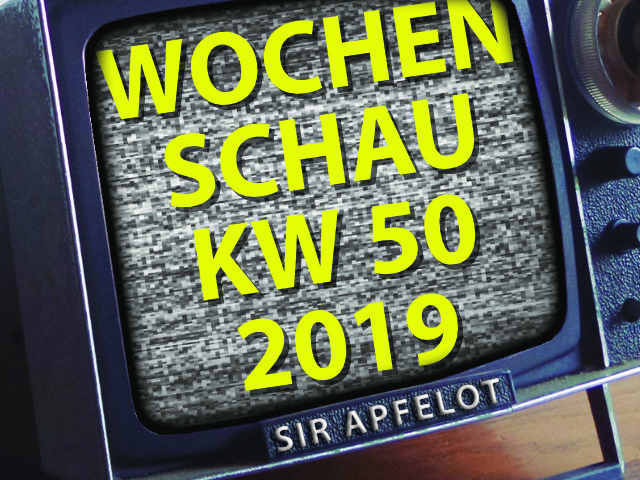 If you thought that there would be no Sir Apfelot newsreel today, you are out of luck. Today, Friday, December 13, 2019, you will again be presented with the Apple and tech news that I particularly noticed over the past week. The messages from calendar week 50 of 2019 include the following topics: End of UMTS in the o2 network, phishing protection in the Chrome browser, penalties for 1 & 1 and Ericsson, clean-up in earth orbit, Apple Pay at the Sparkasse, co-op Gambling and more. 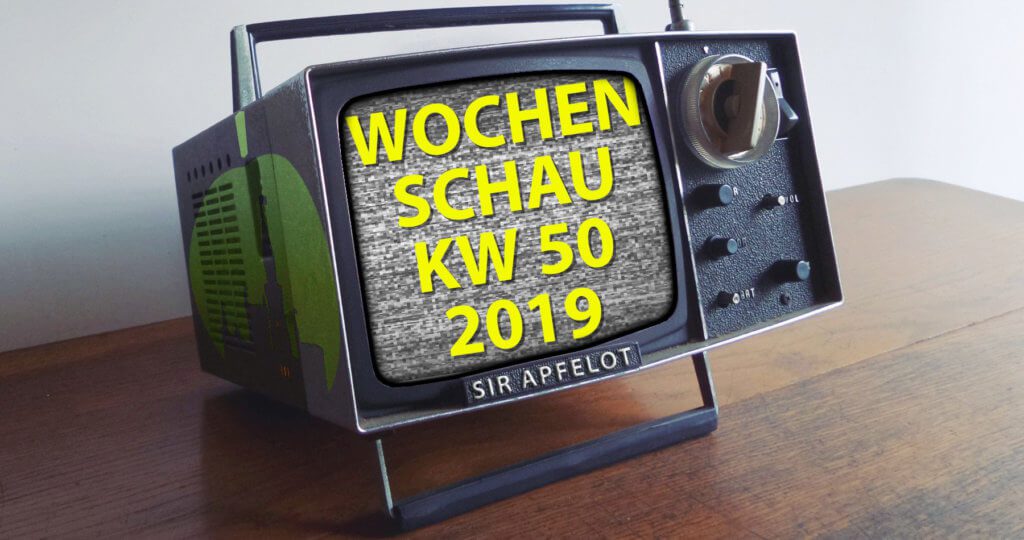 In the Sir Apfelot Wochenschau of calendar week 50 in 2019 you will find the following topics, among other things: End of UMTS in the o2 network, phishing protection in the Chrome browser, penalties for 1 & 1 and Ericsson, clean-up in earth orbit, Apple Pay at the Sparkasse, co-op -Gaming and more.

UMTS, or “Universal Mobile Telecommunication Service”, is a third generation (3G) mobile radio standard. After AMPS, GSM, GPRS and EDGE, the radio frequencies for this standard were auctioned in Germany in 2000; From 2004 the networks of the mobile phone providers were equipped with it. Most of them now use the much faster LTE (4G), especially for mobile internet. And from 2020 should 5G conquer the market. So it is not surprising that Telefónica is announcing UMTS in 2022 o2 network to switch off, like Inside Digital berichtet. The first frequencies should go offline beforehand.

Information and background: Cellular standards from AMPS to 5G

Phishing protection in the Chrome browser

With version 79 of Google Chrome, more protection is to be implemented for the users of the browser. The reports including MacRumors. The new functions should include, for example, anti-phishing, i.e. more protection against spying on personal data, login details and payment information. How it works? In that the Chrome browser checks when the relevant data is entered whether it appears in public records that it has discovered. If you have become a victim of a hack, a data breach or the like, you will be advised directly to change your password, for example. There is also a blacklist for known phishing sites, which is now updated in real time and no longer just every 30 minutes.

And Google again: In the mobile search results of the search engine of the same name, 3D results can now also be displayed as an AR experience for some terms. This is reported by Smart Droid, for example at this point. Just search for “tiger”, “panda”, “deer” or the like, then scroll to the 3D result and watch the 3D videos that are conjured up on the display mixed with the real-time image from the smartphone camera. Of course you can tell that it is a digital model, but the effect is still quite interesting and helps to imagine the animals or objects you are looking for in real life.

Penalty for Ericsson: $ 1 billion for corruption

According to Computer Base (here) numbers. The reasons for this are corruption and bribery. "According to the official announcement from the US judiciary, Ericsson has committed itself to bribing high-ranking government officials in countries such as China, Vietnam and Djibouti in East Africa for years - but the company also committed criminal offenses in Kuwait and Indonesia between 2010 and 2016 committed“, It says in the linked source. The fine to be paid by the Swedish company consists of $ 520 million to the US Department of Justice and $ 540 million to the US Securities and Exchange Commission.

But even in this country there are providers of communication services who have to pay a fine. So should the Handelsblatt zufolg to 1 & 1 pay a fine of 9,55 million euros. The Federal Data Protection Officer Ulrich Kelber imposed this because the group had not complied with data protection law. It was found that the customers and their data were not adequately protected by 1 & 1. The group has already announced that it will take legal action against the penalty.

ESA is cleaning up: space debris should disappear from earth orbit

The European Space Agency ESA is starting a clean-up campaign in space, like Spiegel Online shows. Because not only the International Space Station ISS, satellites with a specific purpose and other objects in use orbit the earth - but also the remains of rockets, probes, space shuttles and spent satellites. The space debris is to be disposed of, which ESA wants to cost 120 million euros according to the contribution. The concept is simple: the “ClearSpace-1” satellite grabs the space debris with its four arms and throws it into the earth's atmosphere, where it then burns up.

PlayStation fans are looking forward to the PS5 expected for next year. The fifth generation of the video game console should not only have an interesting design, but also bring new technologies and functions. For a new multiplayer experience, it could be possible to control a character with several controllers. On a corresponding patent and speculations about it, among other things, Play3 (here) and Netzwelt (here) a - areas of application can be skill-based games in which everyone can contribute their strengths; as well as party games where chaos is an important element: D

For multiplayer gaming on Steam, only one person has to buy the game

And again multiplayer, but this time on the computer with the Steam client: Like Giga shows, there is now the "Remote Play Together" feature, which is the equivalent of a local multiplayer over the Internet. For this, only one of the playing parties needs to have bought the game. So gaming is just as possible as when everyone is sitting in front of a PC or console; just in different places. "Up to four players, with very fast connections even more, can play all local multiplayer, co-op and split-screen games together“, It says in the Giga article. Further information is available on the official Steam website.