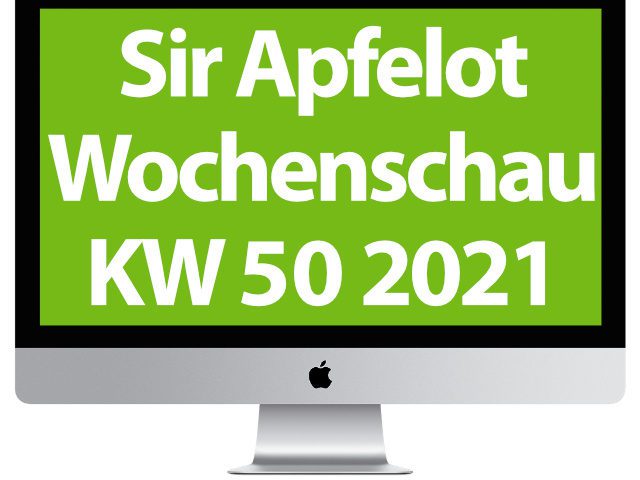 Did you know you can take a look at a Nintendo Games Year in Review to see which games you played on Nintendo Switch for how long in 2021? JP Games informs at this point about it. If you are interested in further news, you are welcome to stay here. Because today there is again a new edition of the Sir Apfelot newsreel. This time I'll show you which Apple and tech news caught my eye in calendar week 50 of this year. Among other things: Dell's Luna concept, Google's AR operating system, why Roblox is not a good Metaverse example, and a few things about Apple.

In the Sir Apfelot Wochenschau for calendar week 50 in 2021 you will find this: Luna Concept from Dell, Google operating system for AR devices, Roblox as a bad Metaverse example, information about iPhone SE 3 and iPhone 14 Pro, the Pixelmator Photo App , Swift Playgrounds 4 for iPad, and more!

Modular notebooks for sustainable computer use

Information and pictures about the “Concept Luna” from Dell can currently be found in one Articles from heise online. This is advance information about a modular and more sustainable notebook series that is to be demonstrated at CES 2022. A simple structure and exchangeable hardware elements should make upgrading or modernizing the respective laptops easier and thus prevent a complete new purchase. This should result in less electrical waste. But even before that, a more environmentally friendly approach should be taken: "In order to minimize the environmental impact of energy-intensive production, the study envisages using aluminum that was smelted exclusively with energy from hydropower plants“, It says among other things.

In addition to virtual reality (VR), augmented reality (AR) is also a big topic of the current time. Apple CEO Tim Cook, among others, sees it as an important future technology. Like it in a Entry by NextPit, Google is working accordingly on an operating system that is specially designed for AR devices. You are referring to one Post from 9to5Mac, which explains that Mark Lucovsky, who was formerly employed by Facebook or Oculus, is now the "Operating System Team for Augmented Reality at Google“Directs. Hopefully the OS will not be as buggy and update sluggish as Android.

Why Roblox is a bad metaverse example

The topic of “Metaverse” has been on everyone's lips since the publication of the Metaversum plans by Facebook (or now “Meta” as the parent company). What is meant by this and that it is not a new idea, I have already shown you here: What is a metaverse / metaverse? Since the corresponding meta-presentation, more and more examples have been used to illustrate the topic - including the “Roblox” sandbox platform aimed at children. There, users can create their own worlds and games and exchange ideas with others. But why that can also go wrong, that will be at this point shown at t3n. In summary, Roblox is a central system from a single provider on which there are many rule violations and also dangers for children.

We come to the Apple reports in this collection of news. It starts with the Pixelmator app, which you may already be familiar with from the Mac under the name “Pixelmator Pro”. Like MacRumors shows, so you can now also use a mobile version under iOS on the iPhone. This is called "Pixelmator Photo" and can be used in App Store can be downloaded for € 3,99 at the start (later for € 7,99) - also on the iPad. One advantage of the app: there is batch processing, thanks to which you don't have to edit each photo individually, but can automatically apply certain settings to several images. IOS 14 or iPadOS 14 or a newer system are required.

Two weeks ago I showed you that Swift Playgrounds 4 is being tested by developers. As it is now in one Articles on the apple page means, Apple has meanwhile made the software accessible to all interested parties. With Swift Playgrounds 4, apps can be developed directly on the iPad and added to the App Store. But not only developers who already know how to put apps together can let off steam with it. Anyone who wants to learn Swift first in order to acquire programming skills will also get their money's worth. Learning to program, creating apps and offering them to others is free with this offer. The free download of Swift Playgrounds 4 for the Apple iPad you can find here.

Camera with 48 megapixels in the Apple iPhone 14 (Pro)?

The Apple iPhone 13 has not been out for a long time, and there is already a whole collection of rumors revolving around the next generation of smartphones from Cupertino. This is what it says in one Entry from iTopNews that analyst Jeff Pu says that the upcoming iPhone 14 Pro and iPhone 14 Pro Max models will again have three camera lenses. However, these should have up to 48 megapixels. There is also a rumor that the Pro models of the 14 series of the iPhone could be equipped with up to 8 GB of RAM. In my opinion, one should wait and see for later messages or for the devices themselves - Apple is not known for big leaps in iPhone RAM.

Seamless control: Universal Control has now been postponed until 2022

Within the WWDC21 keynote Apple introduced a feature intended for macOS 12 Monterey and iPadOS 15: Universal Control (in German: Seamless control). This should enable the mouse and keyboard to be used across various macOS and iPadOS devices, including for data exchange via drag and drop. The function for faster workflow on multiple devices did not come out with the release of the systems - it was postponed to "later in autumn" 2021 for the time being. But how now on the official Monterey site is to be read, it will probably only be “available in spring”. Let's hope that it will not be completely deleted and that it will not wait until WWDC22.

With reference to a market analysis or forecast by JP Morgan Bank from the USA, over a Articles titled by ApfelNews: "Apple iPhone SE 3 could encourage 1 billion Android users to switch“- one also refers to a summary of Reuters information in one Post by 9to5Mac. The iPhone SE 3 should therefore convince with its 5G compatibility and the relatively low price. Especially through trade-in programs, i.e. the trade-in of old iPhones and Android devices, the price can be lowered so that the iPhone SE 3 can keep up with Android smartphones. It should have a 4,7 inch LCD display and come with the A15 Bionic SoC.

Do you still need Christmas presents? Have a look here: 7 last-minute Christmas gifts for tech nerds (150 to 350 EUR).