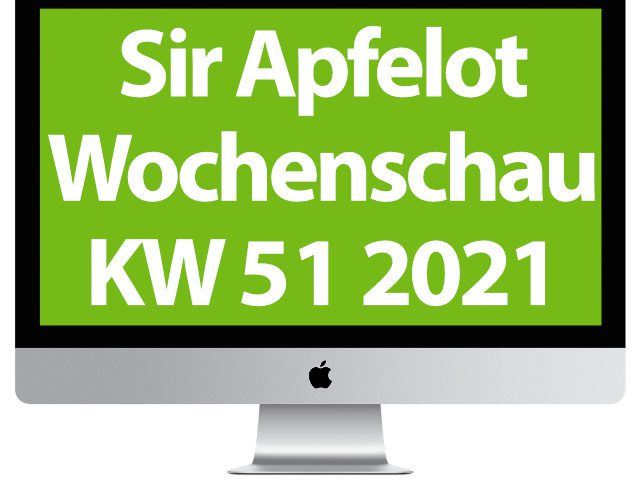 Christmas, the tree festival or whatever you celebrate - it takes place today and the corresponding holidays are ahead of us all. That's why you get a shorter version of the Sir Apfelot newsreel again this week. This time it's about the Apple and tech news that caught my eye in calendar week 51 of the dwindling year 2021. Included are z. E.g. these messages: Facebook vs. EU law, older iPhones and iOS 16, possible changes in Apple Music, insight into Apple Park, and more.

The Sir Apfelot Wochenschau for calendar week 51 of 2021 includes the following topics: Facebook does not take the GDPR seriously, older iPhones and iOS 16, iPhone 14 with a new display design, insights into Apple Park, and more.

According to the data protection organization Noyb, Facebook is said to violate the EU's General Data Protection Regulation (GDPR), as stated in a Entry from Basic Thinking means. In particular, it is about the personal data of users of the platform being forwarded to the USA. How this is possible, how the matter is handled internally on Facebook and further information can be found in the linked source.

In addition to iOS 12, which continues to run on many "old" iPhone generations and also receives updates in important cases, there has been iOS 13, 14 and 15 in recent years. These are compatible with devices up to the year of release 2015 and newer (iPhone 6s, SE, iPhone 7, 8, X, etc.). However, the oldest could be screened out in the coming year when it comes to upgrading to iOS 16. Multiple media (z. B. here) report that the iPhone 6s, iPhone 6s Plus (both 2015) and iPhone SE (2016) from the List of compatible models will fall out. The same should apply to iPadOS 16 for the iPad (5th Gen), iPad Air 2, iPad mini 4 and iPad Pro from 2015.

iPhone 14 should come without a notch

A so-called hole punch camera is to adorn the front of the upcoming iPhones and thus replace the notch that has been used since the iPhone X (2017). The necessary display panels are to be supplied by LG and Samsung, it says in one Entry by MacRumors. You can find even more details and rumors about the upcoming OLED displays with holes in the iPhone 14 and iPhone 14 Pro in the linked source.

A cheaper alternative to the Pro Display XDR is planned

With reference to Bloomberg, the Macerkopf reports in one Articlesthat Apple should work on a budget model of the Pro Display XDR. The display presented in 2019 alongside the Apple Mac Pro with excellent graphic properties costs several thousand euros, and the accessories that are sometimes necessary also make a big difference. A cheaper alternative with the same or similar advantages for photo and video creators is sure to find sales. In addition, Apple is to work on other external displays, such as monitors with 24 and 27 inch screen diagonals. It is not yet clear whether and when the individual devices will come onto the market.

"A Reddit user sent Tim Cook a long, critical email and, to his surprise, received a call from an assistant to the Apple boss“, It says in the introduction to one Entry from MacWelt. In detail, it is about Apple Music and the fact that the service and the associated app do not offer the right user experience. The offer is not really suitable either for organizing large music collections or for discovering new music. Rather, it is an unsuccessful middle ground. According to the information, the criticism has probably already been forwarded to the responsible teams at Apple. "The contribution was not supported by evidence“, It says, however, in the last paragraph of the source.

The "Apple Park" is the round company center of the company that was once founded by Steve Jobs, among others. In addition to the circular main building, the area also includes outdoor areas, the Steve Jobs Theater and other facilities. Visitors don't get to see too much of it - also and especially so as not to reveal current work and developments to the outside world. The French TV station TF1 was allowed to look around a bit more (and therefore show some of the video recordings blurred), as in one Entry from the Macerkopf is called. You can have a look yourself with this link.