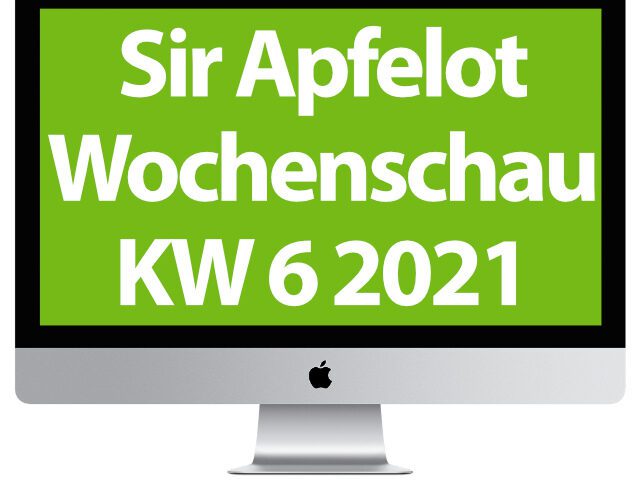 In addition to the Release of Super Mario World 3D + Bowser's Fury there are a few more interesting news for today, Friday. Fortunately, we have the “Sir Apfelot Wochenschau” format on this blog. Because here you will again get the Apple and tech news presented to me in calendar week 6 of the year 2021, which I have particularly noticed in the past few days. Among other things, these messages are included: privatized government power in Nevada, financial support for digital home schooling, interesting facts about IKEA's gaming furniture, corona detection of the Apple Watch, more about the Apple car, headset ambitions in Cupertino and more.

In the Sir Apfelot Wochenschau for calendar week 6 in 2021: Companies with government power in Nevada, financial support for home schooling, IKEA gaming furniture, Corona detection of the Apple Watch, information about the Apple car, headset ambitions with Dan Riccio, and more.

"Nevada wants to cede local government power to tech companies - including the court“, Headlines heise online in a current issue Post . It addresses the efforts of the Governor of Nevada, Steve Sisolak, who wants to allow so-called "innovation zones". The euphemism stands for places that are created by tech companies and where they have the say - from taxes to schools and the police to the judiciary. A case study is given with Blockchains LLC by Jeffrey Berns. The company now owns 270 km2 Land and a bank to finance the efforts. Details can be found in the linked source.

The trade magazine iFun shows this week in a Entry on an instruction from the Federal Employment Agency. From directive 202102001 of February 1, 2021 (can be viewed here as a PDF) shows that additional requirements can be registered for devices that are useful for distance teaching. If there is a pandemic-related failure of face-to-face teaching among students or families, an application can be made for devices such as computers, tablets, etc., up to 350 euros. There are of course various prerequisites and verification requirements in the bureaucracy that is emblematic for Germany. Details can be found in the linked sources.

"The real driver of the conspiracy is not Parler, but Facebook“Is the headline of the star this week over a corresponding one Message. The main focus is on the role of the two social media platforms in the run-up to the storming of the Capitol on January 6th. As part of the corresponding indictments, an evaluation of the social media activities of those involved took place, which was carried out by a research group at George Washington University. Parler got 8 mentions, Facebook 73, and YouTube 24. After Facebook and YouTube, the frequency overview also includes Instagram, another Zuckerberg platform. So the measures taken by his group against right-wing extremism are not enough.

A hand made of wood: accessory among the new gaming furniture from IKEA

Last week the Sir Apfelot newsreel was about the new ones Gaming furniture that was created in collaboration between IKEA and Asus. In addition to desks, chairs, a roll container, a cup holder and similar useful items, a movable hand made of wooden components also seems to be part of the range. This is reported by the Gaming Gadgets page at this point. The sense behind the table decoration quickly emerges: the hand with the adjustable fingers serves as a holder for headphones, headsets, cables and the like. Smart and by doing without plastic (at least apparently) also ecological.

According to the study, Apple Watch recognizes Corona even before the symptoms

Apple repeatedly emphasizes that the Apple Watch is an important tool for personal health - and to some extent life support. Now a study is to show that the Apple Watch can indicate important changes in the body; and that in relation to a Covid-19 infection. That reports, among other things, Netzwelt with a Entry. With reference to CBS News (.) and TechCrunch (.) it is shown that researchers have succeeded in detecting a corona infection with a hit rate of 67% based on irregularities in the heartbeats of the examined persons even before the first symptoms. As explained in Netzwelt, it is not about measuring the heart rate, but rather about heart rate variability (HRV).

News about the Apple Car: "Hyundai is out"

Recently there was again extensive speculation about the electric car from Apple. Not only were there various statements from Ming-Chi Kuo in the room. Hyundai and Kia have also been repeatedly traded as suppliers or fitters for the vehicle and have already been named the "new Foxconn". Here on the blog it went in one Single contribution and also in the last newsreel therefore. At mobiFlip it means at this point now "Hyundai is out". With reference to business magazine Bloomberg (.) it is reported that the company has ended talks with Apple. MacRumors also reports the same with a small one Post .

Let's stick with MacRumors. Because I have one there Entry found, which revolves around a current beta version of Apple's mobile operating system iOS. This is before the update to version 14.5 and contains, among other things, an adjustment in the Siri services. If the voice assistant is asked to play music, Apple services or a frequently used app are no longer used by default. Users can choose from a whole list of (installed) third-party applications. Songs, albums and playlists can also be selected individually via Siri if they are distributed via various streaming or music apps.

Riddle about Dan Riccio solved: he takes care of the new Apple headset

In addition to the Apple Car, the AR / VR headset from Cupertino is also the subject of various speculations. A restructuring of Apple's staff recently played a role in the rumors. Dan Riccio took over a press release from Apple in January after "a new project" (already mentioned here). According to an iFunEntryto act as the mixed reality headset for augmented reality (AR) and virtual reality (VR). In the linked source, iFun refers to Bloomberg, where Apple connoisseur Mark Gurman talks about the matter berichtet.

Windows and iPhone sounds as a cappella versions

Some entertainment at the end: the South Korean a cappella quintet “MayTree” has published two videos on YouTube, along with other content, in which the five artists imitate the well-known sounds of Microsoft's Windows operating system and Apple's smartphone, the iPhone. Start and end sounds are just as much as the trash can, ring tones and the alarm clock. The corresponding videos have gone viral and found their way into various magazines and on a number of Twitter accounts this week. I've embedded them for you below. Have fun