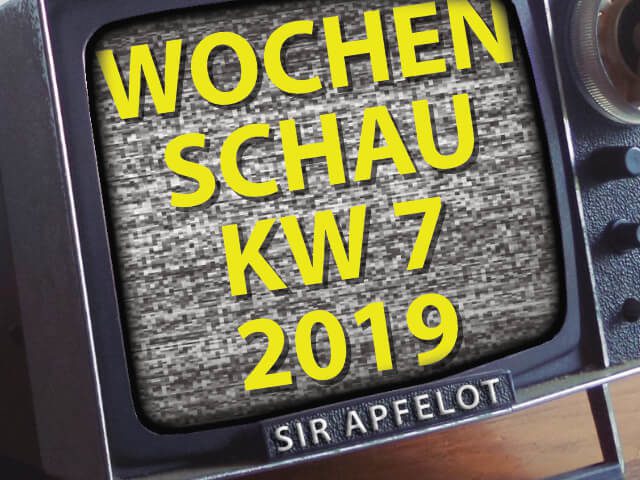 It's Friday again, so it's time for the Sir Apfelot newsreel again! In this week's news article, I'll show you Apple and tech news that caught my eye in calendar week 7 of 2019. This includes Google, Amazon, Nintendo and WhatsApp, among others. There are several reports about Apple - everything from WWDC to iPhone to AirPower is included. And there is also a look at the EU and China. If you want to leave your opinion on one or the other topic or if you know a message that would fit into the following series, then please leave a comment;) 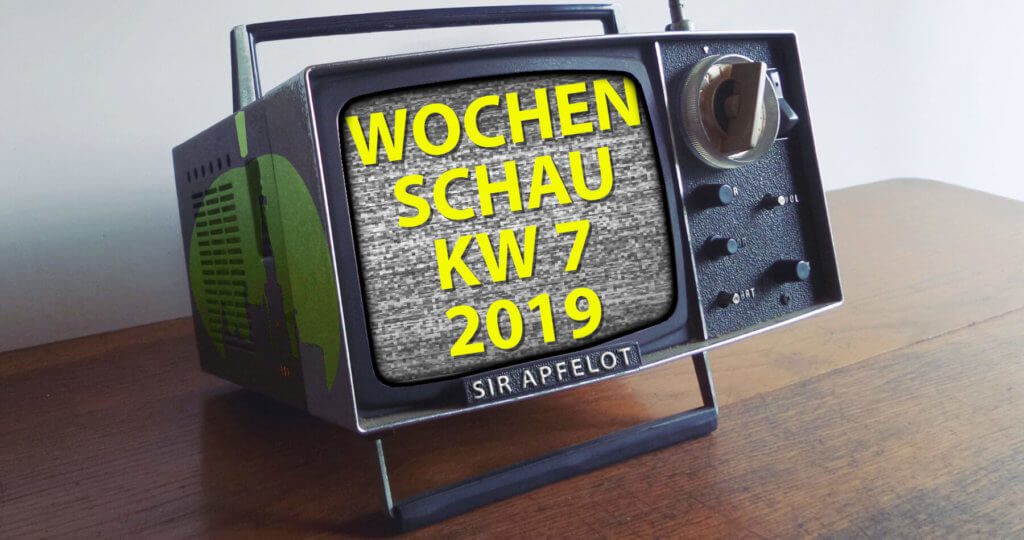 Apple, Google, Amazon, Nintendo and WhatsApp - these companies, among others, make the headlines that fill this week's Sir Apfelot newsreel! What do you think of that?

Article 13 and upload filters are on the way

The EU has launched a final draft to amend or expand copyright law, which could fundamentally change the Internet and the culture it has built up over decades. Or will change. In a separate report, I highlighted the topic and the problems associated with it: Here. There is also additional information and critical voices that fear censorship on the Internet in this message from iFun.

The Google Arts & Culture app brings art to the smartphone. With the iPhone, among other things, works of art can now be viewed using augmented reality (AR) in your own home or on the go. To do this, the floor is first measured by a camera, then the user selects the image to be displayed and this is finally shown on the display as an apparent part of the room in which one is located. So you can create your own little art exhibition and determine how big (or small) some works of art really are in relation to the room and its furnishings. Other functions of the app also include the camera and find, for example, portraits from art history that look similar to the user. There's more to it on the google blog as well as with app threats.

Amazon is doing exactly the opposite of what Apple is doing. While the technology giant from Cupertino finally closed its router department last year, the shipping giant apparently wants to really crank it up in this area. That proceeds from the purchase of the manufacturer eero as well this post from app dangers. New solutions for the smart home are likely to result from the merger. Perhaps a mesh system made up of echo routers that can be set up via Alexa? We will see.

Finally, determine whether you can be added to groups and who is granted this privilege, this should soon be possible in WhatsApp. Like the iPhone ticker here reports, "the new function [...] will soon be available for participants in WhatsApp's public beta program". The new menu item "Groups" is then added accordingly in the data protection settings. This can be used to determine whether you want to be added to groups - and if so, by whom.

Sales of iPhone 7 and 8 in Germany: Modified models from Apple

I have already shown you in another newsreel that Qualcomm was able to obtain a partial stop on the sale of iPhones in Germany. Apple would like to continue earning directly from the models 7 and 8, which is why the manufacturer is now selling appropriately adapted versions. As a German source reports, among other things, app risks here about that. But the topic is also treated internationally, like a report from MacRumors at this point occupied. What exactly is the difference? Instead of Intel chips, Qualcomm chips have now been installed to resolve the dispute and to stay on the market by means of a compromise.

Also at MacRumors (here ) and app dangers (here ) I found reports about new Apple products for spring 2019. With reference to a Greek website, which in turn refers to Chinese sources, it has now been leaked that new products will be available from March 29th. That is noticeably close to March 25th, for which an Apple Special Event was predicted. In addition to the AirPods 2 in several colors, there should finally be the AirPower charging mat for Qi devices - above all, of course, iPhone, Apple Watch and AirPods case. So next month is going to be pretty exciting with new Apple devices!

Meanwhile it says with the iPhone tickerthat Apple's streaming service for films and series should come in April. It remains possible that the presentation of the service will also fall on March 25th. However, another Apple date could follow in April, at which the streaming offer will then be made available live. Incidentally, not only Apple's own productions should be viewed as content, but also other films and series. A channel or ticket model for booking different content or packages is definitely considered possible. "According to CNBC, it is questionable whether the premium content of the American pay broadcaster HBO will also be available - Netflix and Hulu should definitely not be represented," says the linked iPhone ticker post.

And if you already have the calendar open for this year's Apple events, then leave it in this state. Because according to MacRumors The WWDC data for June 2019 should now be available. According to the trade magazine for Apple and technology topics, the event for developers will take place from June 3rd to 7th at the McEnergy Convention Center in San Jose. According to sources, this data is booked for a major world-class event. Many other dates are also booked in June, but these are for other occasions. In addition, the event calendar of the city of San Jose was consulted - and there, too, the date in question clearly states “Apple”.

Let's stay on the subject of Apple events and product presentations for a paragraph. Because like it (again here at MacRumors) means, there are some indications from the supplier Largan that Apple will also introduce a triple camera on the back of the device with its iPhone flagships this year. This would move Apple up to Huawei, among other things; because the Huawei Mate 20 (Pro) model already has a main camera with 3 sensors (here pictures and data).

“E-athlete” is now an official profession in China

Like golem shows, the esports profession has now been recognized in China. There is a distinction between “Professional”, ie the executing player, and “Observer”, for example the commentator or trainer. What Golem also takes up in addition to this division of the terms used in the job description are the lists of activities linked to the professions. So-called “Account Boosting” should also play a role in the Professional. This describes the help that a professional player gives a less experienced player in leveling up. This is actually frowned upon as cheating in the esports scene. Golem suspects a mistake by the authorities.

The day before yesterday there was a new Nintendo Direct at 23 p.m. Central European Time. I would like to close this newsreel on this topic, which is also related to video games. Because not only the Super Mario Maker 2 announced and words too Bayonetta 3 lost, but many more games for them Nintendo Switch shown. Some could already be downloaded after the presentation (as a demo). Others will come later in the year - for example the Switch remake of The Legend of Zelda: Link's Awakening, a terrific Game Boy classic from 1993. Here it is Video: