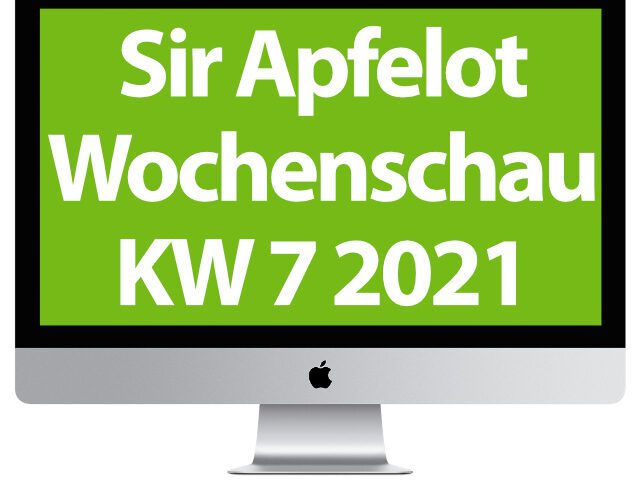 The year progresses, the snowy winter gives way to thaw and sunshine in some places. But before you go on a weekend walk, there is, as usual, the Sir Apfelot newsreel. On this Friday, I'll show you which Apple and tech news caught my eye in calendar week 7 of 2021. Among other things, the following messages are included: Mars rover "Perseverance" does not deserve applause, Microsoft is killing the Flash Player (unreliable), security gaps at Clubhouse, lawsuit against Sony over PS5 controllers, more animated films on Apple tv +, leak from GTA 6 Content, and more.

Included in the Sir Apfelot weekly newsreel for calendar week 7 in 2021: Mars rover "Perseverance", drift on the PS5 controller, mega leak on GTA 6, security gaps in the clubhouse, Apple's entrepreneur camp for black founders and developers, foldable iPhone in 2023 and more.

The Mars rover "Perseverance" and what errors the mission has

"Perseverance: This Mars mission did not deserve applause“Is the headline of Golem magazine this morning in response to the landing of the new NASA Mars rover, which was tracked around the world, last night. Several points are given as reasons for this. Explanations of the rover's scientific instruments were given within two hours of reporting in just six seconds.

The austerity measures in data transmission from Mars to Earth are also criticized. 500 x 500 pixel images that take 90 minutes? It's a hundred to ten thousand times faster! In addition, the mission cost too much money, the rover partly consists of spare parts from its predecessor and it is not clear whether the samples it created can be recovered in a few years with the mission that has already been postponed. So understandable criticism ...

Like, among other things, a network world in one Post shows, the Microsoft Windows 10 operating system gets a patch with the KB4577586 update that not only removes Adobe Flash from the PC, but also blocks reinstallation. Users can choose to install the update or ignore it. As shown, however, "not all flash components [...] remote". With reference to the Bleeping Computer Blog, it should be noted that although Flash is removed from the system itself, web browsers are not cleaned up. This even applies to the in-house browser Microsoft Edge. In addition, manually downloaded Flash installations remain on the computer. So the update is not that clean.

Our contribution: Adobe Flash Uninstaller - How to Remove Flash on Mac & PC

The offer from Agora, a startup from China, is used for voice chat in the Clubhouse app. With this, the company can record specific conversations or statements from individual users. Then heise goes online in one Entry a. It also deals with other deficiencies in IT security and data protection. "In principle, it is easy to record conversations on Clubhouse almost unnoticed", It says with reference to the research group of experts who have taken on the matter. As expected and already shown elsewhere, the Chinese government is also able to listen in, evaluate data and initiate appropriate measures.

As with the Joy-Cons of the Nintendo Switch, there also seems to be a so-called drift problem with the controller of the Sony PlayStation 5. This means that a joystick or analog stick input is registered even though the component is not touched at all. Netzwelt shows that there will be a lawsuit at this point on, currently being tested in the US. Please note that users who experience the problem should contact Sony for a repair. Because basically the problem is covered by the guarantee. You only have to pay the shipping costs if you send the controller in for repair.

Pay parking fees with Google Pay - possible in the USA

Take a parking ticket from the machine and then put it behind the windshield? Google now wants to make that obsolete with its payment service. At least in the USA, the corresponding efforts should already be underway, shows Caschy's blog in one post on. Because there the offers of Passport and ParkMobile were added to the Google Maps map service. The “Pay for Parking” button then appears in Maps for individual parking spaces. In addition to the fact that there is no need to visit a machine or parking meter, one advantage is that parking time can be extended on the way. Further details can be found in the linked source.

Apple tv + in the future with more skydance content?

In a message from the Macerkopf (here ) it says with reference to variety (here ) that Apple is said to have signed a multi-year contract with the animation studio Skydance Animation for its streaming service. This means that Apple tv + will get more animated films and series in the future. Skydance Animation is a division of Skydance Media, a studio founded in 2006. The animated films currently include the titles "Luck", "Spellbound", "Pookoo" and "The Fourteenth Goldfish" ( ).

Foldable iPhone with Pencil on the market from 2023?

Most recently, the Apple rumor mill has always been preparing various bites and snacks on the subject of MacBook Pro. However, the subject of the “foldable iPhone” is currently boiling up again. There is one at MacRumors, among others Note that a 7-inch model with an OLED display could hit the market as early as 2023. The 7 inches are only an approximate indication. With reference to various sources, a display with a diagonal of 7,3 to 7,6 inches has been speculated. In addition, the collapsible Apple smartphone should be compatible with the Apple Pencil, i.e. an iPhone-iPad hybrid. You can find more details in the linked source.

As noted recently, it is worth taking a look at the Apple Newsroom from time to time, i.e. the digital display of Apple press releases. There has been a message in it for a few days under the heading "Apple starts the first entrepreneur camp for black founders and developers". Managers and teams from 13 companies are welcomed there. Apple wants to strengthen communities and do its part for equality. In addition to information about the camp and cooperation with other companies can be found in the press release also information about the individual developers and studios.

And finally, another message from the world of computer games. Because like net world here showed, there should be a leak on the data of the upcoming GTA 6. In addition to the release date, this should contain detailed information about the game world and how it can be rolled out on consoles and PCs, as well as the game time. The data was published on 4Chan and Reddit, among others. The following information emerges from this (source is the linked article):