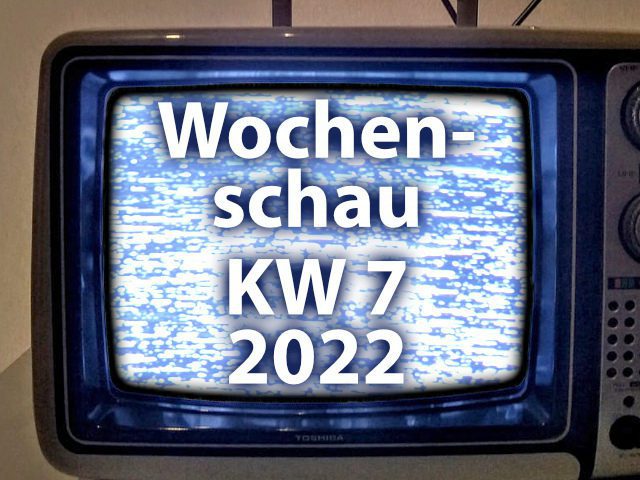 For today's Friday there is another packed Sir Apfelot newsreel so that you can start the weekend well informed. In the following, I will show you the Apple and tech news that particularly caught my eye in calendar week 7 of 2022. Topics covered include: Twitter with new messaging options, e-prescriptions being postponed, eBay classifieds scams, an iPod for 2022, lots of new Apple device rumors, and more. Am I missing something important? Then please leave a comment with the news you found!

Twitter not only offers public exchange with tweets with a maximum length of 280 characters, but also the possibility to communicate with others via direct message (“DM” for short for direct message). If you have several such chats, but always want to keep an eye on the most important or most recent ones, then you can pin them now. This is reported, among other things, by 9to5Mac in a Entry. Up to six chats can be kept at the top of the list. According to the linked source, the feature was previously only available to users of Twitter Blue. This is a subscription model for additional features of the otherwise free platform.

The "e-prescription" is postponed indefinitely

"Introduction of the e-prescription postponed indefinitely" says an official Entry of the German Bundestag. Actually, electronically created prescriptions for medicines should already be introduced on January 1, 2022. But now the test phase will be extended. There seem to be various reasons. These are explained in several paragraphs. Among other things, there are still technical problems "with the e-prescription and the issuing of the electronic certificate of incapacity for work“. In addition to the technical implementation, there also seems to be a lack of communication with the users. For issuers of the digital documents, there were hardly any instructions or training courses regarding the required hardware and how to use it. Details in the source.

Anyone who is careless as a seller on eBay classifieds could currently fall for a scam. As the Berlin police warn, sellers of the platform will be written to with the question of whether they accept payment via the platform's payment system ("Pay safely"). If they agree, the supposed buyers send a link to register for this service. There, credit card data and, if necessary, further information are requested, such as the iPhone ticker at this point summarizes. However, the recorded data does not ensure that the payment is received, but that the credit card is charged abroad. Official information about "Pay Safely" from eBay Classifieds can be found here.

Use of Universal Control is simplified in the current macOS beta

Meanwhile, iFun is going with the macOS 12.3 beta of the 3rd version with one Entry a. In the beta, among other things, the use of "Universal Control" should be simplified. The feature was announced for macOS 12 Monterey and should actually be available at the start of the Mac system and iPadOS 15. With some delay, it will probably be coming to the Mac and iPad soon. It helps to use mouse and keyboard across devices and even use drag-and-drop functions to e.g. B. Exchange files. With a dedicated menu in the macOS system settings, it should now be even easier to use.

An iPod with 1TB of storage, new OS and Doom

Also this week, iFun has dedicated itself to a completely different topic, namely the creation of a new generation of MP3 players. For this, the project was developed by Ellie Huxtable used, which she put on her Homepage as well as on twitter documented. She fitted a screen-equipped iPod with a more powerful battery, removed the HDD and replaced it with two 512 GB SD cards, installed the Rockbock OS system and made other adjustments. Now she has an MP3 player that fits the year 2022 and on which you even play Doom can. With that, she has already answered the meme question “Can it run Doom?” herself.

Meanwhile, MacRumors is dealing with an Apple device that is not yet on the market. In a current Entry a Korean blog post is discussed that talks about 8 GB of RAM in the future iPhone 14 Pro. This means that the smartphone expected for September 2022 would have as much RAM as the Samsung Galaxy S22 - but you can't compare the devices directly, since the SoC, the operating system and other elements are too different. The linked source also picks up other device rumors that have been published on the Korean blog in the past. These were correct in many details, even if not 100 percent.

What can you expect from the Apple iPad Pro 2022?

MacRumors also takes on this question in one go Post at. The well-known two sizes (12,9 inches and 11 inches) are expected again, both with a mini-LED display. In addition, the M2 chip should replace the current M1 chip in the Pro tablets Cupertino substitute. Furthermore, the possibility of charging via MagSafe is expected for the Apple iPad Pro 2022. The wireless charging of other devices, i.e. using the iPad Pro as a Qi power bank, is also shown as a possibility. The case could also be made of titanium instead of aluminum. It is also possible that there will be a new generation of the Apple Pencil.

There are currently many rumors about that Apple is holding a special event in March, On the Keynote new devices or new hardware for existing devices should be presented. So there should be a revised 13-inch MBP that introduces the new M2 chip. Like MacRumors at this point shows, it should also come with a touch bar again. Personally, I'm curious to see if this comes true. After all, other reports of the last few weeks seemed to have conjured up the end of the Touch Bar. What do you think? Please leave a comment!

Another cheaper display from Apple

In the last paragraph of this Sir Apfelot newsreel I go back to one Post from MacRumors. In this, a new display, i.e. a monitor for use on Mac and Mac mini or as an additional, external monitor on iMac and MacBook, is discussed. This should be cheaper than the currently available Pro Display XDR for 5.499 or 6.499 euros. But it shouldn't be that bright and also have a reduced contrast. 24 inches and 27 inches are expected as selectable sizes. The linked source is also about a successor to the Pro Display XDR, which could measure 32 inches diagonally. Check it out if you are interested in the topic.