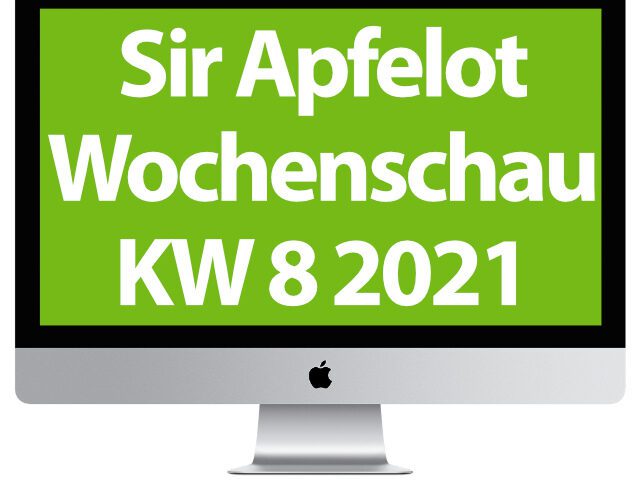 It is the last Friday in February, and in some places it is already the spring heralded. But we're taking it slowly. At the end of the week there is a very traditional Sir Apfelot newsreel. Here I'll show you which Apple and tech news caught my eye in calendar week 8 of the year 2021. These topics are included, for example: SD-WAN from Vodafone bundles data transfer paths, Windcloud shows server farm with positive CO2-Balance sheet, more iPhone memory protection from iOS 14.5, the latest Apple developments and investigations, video game news, and much more.

Only for a short time: AUKEY deals and Pitaka Deals

For companies, Vodafone offers a Items from Golem, so-called SD-WAN. The funny abbreviation is intended to summarize the terms "Software Defined Networking" (SDN) and "Wide Area Network" (WAN). Smart software control should ensure that the best bandwidth can always be used. This is created from a combination of 4G LTE, 5G cellular radio, coaxial cable and fiber optics. But not only one location should be supplied with fast internet; rather, it is about the fast and stable connection between several locations. Further details can be found in the linked source.

"The German company Windcloud operates a data center whose waste heat helps to grow microalgae. The result: green computing power“, It says in a nutshell in the introduction to one Contribution from heise online. It describes the structure of the premises in Enge-Sande (North Friesland). The warm exhaust air from the server rooms is directed into greenhouses for algae. There, the exhaust air warms in winter and cools in summer, so that approx. 34 ° C is reached. It doesn't get too cold in winter and not too hot for the algae in summer. The energy to operate the system also comes "from the offshore wind farms in the North Sea". The magazine refers to one Items from FAZ.net.

OPPO innovations at the Mobile World Congress in Shanghai

The specialist magazine Allround PC berichtet meanwhile from the innovations of the smartphone manufacturer OPPO. For example, he presented wireless and contactless charging technology at the Mobile World Congress in Shanghai (MWCS), which is currently running. This means, for example, that the OPPO X 2021 can be charged with 10 W from a distance of up to 7,5 cm from the charger. With similar charging technologies from Xiaomi or Motorola, it is said that only up to 5 W are possible, but a greater distance to the charger. Incidentally, in the linked report you will also find a test video for the OPPO X 2021, whose display is not enlarged by unfolding, but rolling out - quite impressive.

GNU Taler: Cash anonymity when shopping on the Internet?

Let's look again too hot online. Because there you can read something about the so-called "GNU Taler" - click here. According to the source, the concept for this was developed by Thomas Moser (board member of the Swiss National Bank), Christian Grothoff (GNU developer) and David Chaum (inventor of DigiCash). In short, it is said to be digital money issued by the central bank that grants full data protection and thus could make online purchases as anonymously as cash transactions. "In addition, money laundering and tax evasion would be made more difficult", is it [called. Further information, technical details and advantages of the idea can be found in the linked source and in the 34-page concept paper.

Storage protection at Apple: Prevention of zero-click exploits on iOS

The update to iOS 14.5 is still pending on current iPhones, but the beta for the system is already available. And it is precisely in this that references to extended memory protection have been found. This is reported by Golem (here ) with reference to motherboard / vice (here ). In addition to Apple itself, security experts are said to have shown that malware that does not require any action from iPhone users will be less easily possible on devices with iOS 14.5. Pointer authentication should be the focal point of the new memory protection. What is behind it and what else there is to know about it, you can read in the linked sources.

Especially when using the Mac mini from 2020, display errors should occur when connecting monitors via HDMI. Pink pixels or pink rectangles appear on a horizontal line. Reports from users who have noticed this error in their hardware combination can be found at Apple Support as well as on Reddit or in the MacRumors forum - MacRumors shows that at this point on. In addition, the linked message addresses the work-around that Apple is proposing until the problem is patched:

If there is a technology report by Mark Gurman at Bloomberg, then one can always hope for new insider insights from Apple. Last week there was another report like this (here behind paywall), the 9to5Mac at this point summarizes. The most important point is a "battery pack" that Apple is developing for the current iPhone models of the 12 series. Thanks to the MagSafe magnets, the external battery should adhere to the back of the iPhone 12 (mini / Pro / Pro Max) and charge it wirelessly. However, there seem to be problems during development, including messages about the overheating of the battery if it is not overheating at all. Therefore the project could also be canceled.

The Nintendo Switch has been around since 2017, so a new generation of the console or a completely new offer from Nintendo is becoming more and more likely. Above all, more computing power, but also a higher resolution (4K instead of 1080p HD), fans of the console and game manufacturer from Japan can expect. New rumors about a "Nintendo Switch Pro" with a larger display and 4K resolution on the television are taking hold in a network world Entry on. However, it says that the information should really only be understood as rumors. Nintendo has not yet officially announced a new console.

Three Blizzard classics as a collection for PS4, Xbox One, Switch and PC

As part of the manufacturer's own game fair Blizzcon 2021, Blizzard presented its "Blizzard Arcade Collection". This includes the three classics The Lost Vikings, Rock'N'Roll Racing and Blackthorne. Personally, I can especially recommend the puzzle game “The Lost Vikings”. I not only enjoyed this on my PC in the mid-90s, but also when I later bought it for my SNES collection. The three games as well as further information about the collection for PlayStation 4, Xbox One, Nintendo Switch and Windows PC can be found in the official Release video.