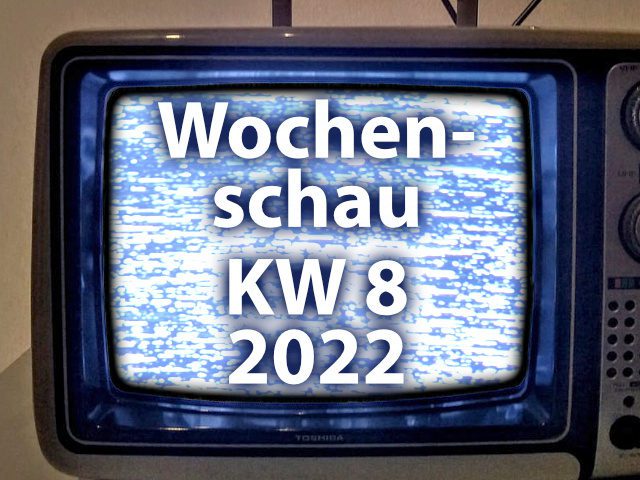 The last Sir Apfelot newsreel of February is on today. Before we all start the weekend, I will show you the Apple and tech news that particularly caught my eye in calendar week 8 of 2022. Among other things, these reports and contributions are included: communication failure on Hiddensee, cyber attacks on Ukraine and statement from MacPaw, Perseverance recordings in 8K, updates for Logitech Options+ and Halide Mark II, information about the upcoming Mac models, rumors about the iPhone 14 and Apple AR/VR glasses and much more.

In the Sir Apfelot newsreel of calendar week 8 in 2022 you will find the following reports, among others: Communication failure on Hiddensee due to damaged submarine cable, cyber attacks on the Ukraine and statement from MacPaw, updates for Logitech Options+ (Mac) and Halide Mark II (iPhone), information about the upcoming Mac models, rumors about the iPhone 14 and Apple AR/VR glasses, etc.

Ironically, when the telecommunications network was being expanded, the ship that was supposed to lay a new line to Hiddensee damaged the submarine cable that had already been installed. As a result, around 1.000 people on the Baltic Sea island are said to have had no or only limited opportunities for contact. This is reported, among other things, by heise online Entry. It is pointed out that the problem did not only affect private households, but also the administration, the supply structure and medical facilities. The cause of the incident was "misinformation from Deutsche Telekom about the location of the existing cables" turned off. Further information, including the delayed repair, can be found in the linked source.

Russia attacked Ukraine. That's the current state of affairs, which I won't elaborate on here because Sir Apfelot is a tech blog, not a geopolitical news site. However, an email from MacPaw (the makers of CleanMyMac, Setapp and more) achieved. The company is based in Kiev and has one official statement to the current situation. Users are assured of problem-free use of the offered software - it is hosted outside of Ukraine via Amazon Web Services and payments are processed via Paddle, a service from the United Kingdom. MacPaw asks to support Ukraine by donating to appropriate organizations.

Our colleagues at iFun also have a Entry on the words of MacPaw. This also contains a reference to malware and DDoS attacks against Ukraine. These are aimed at "against government agencies and important institutions from the public and financial sectors“. Details on the malware used or, first of all, on the malware that could be identified so far, are meanwhile available in one Entry from hot online. According to the linked source, since the day before yesterday there has been an increased use of the malware called "HermeticWiper". This is reported with reference to ESET Research. Further details and information can be found on the linked pages.

Note: I reserve the right to delete unqualified comments on the topic that do not do justice to the seriousness of the situation.

For some time now, Seán Doran's YouTube channel has featured high-resolution space footage. The most recent videos show the surface of Mars. In addition to two 4K videos, the latest one is even available in 8K resolution. The YouTube filmmaker used footage from the Mars rover Perseverance. In order to be able to use them for the music-accompanied videos, he removed the image noise and made other adjustments, among other things. He then scaled them to a higher resolution and assembled them into the multimedia work presented on YouTube. You get an insight on the channel page.

Hideaki Nishino, the senior vice president of Platform Experience, this week on the official PlayStation blog presented the design of the new VR setup. The PlayStation VR2 follows the black and white design of the PlayStation 5 in terms of color scheme and is said to offer more comfort than its predecessor. The ergonomic controllers are complemented by a headset with ventilation. The whole thing should make you “forget” that you are wearing the appropriate equipment when experiencing virtual reality. You can find more details and pictures of the PlayStation VR2 design in the linked source.

If you use Logitech accessories with your M1 Macs, there is now native software for the settings with the new version of Logitech Options+. Like iFun in a Entry shows, the software was optimized for "Apple Silicon" chips. This means that Logitech Options+ in the current version without emulation can access the resources of the M1, M1 Pro and Max M1 can access. However, the situation is different with Logitech Options (without the plus sign). So is this "Options continue to run by default on new Macs Rosetta-Support required".

Some Apple iPhone users are currently plagued by a bug that sometimes means that images and photos from apps simply cannot be saved. The developers of the popular professional photo app Halide Mark II address this problem with a workaround, like the iPhone ticker berichtet will. In addition to saving a copy of the image, Halide Mark II 2.7.0 brings with it further improvements and new functions.

Face ID - Repair a module instead of replacing the iPhone

I also have the iPhone ticker Readthat Apple wants to make it possible in the future that a defective "Face ID" function on the iPhone no longer has to be fixed by a complete device replacement. Rather, the module responsible for the Face ID should be able to be replaced. "Apparently, the manufacturer will provide a previously unavailable TrueDepth module for authorized service technicians", it says with reference to one Articles by MacRumors. The repairs of the Face ID using the new module should only be possible from the iPhone XS (2018), although the technology has been used since the iPhone X (2017).

MacRumors also lived up to its name this week with regard to current Apple rumours. There was a post about the Mac models expected for March, May and June - iMac, MacBook Pro, MacBook Air and Mac Mini. Entry-level models should get the M2 chip, high-end models the M1 Pro or Max M1. It is also speculated that the iPhone 14 Pro design is now final and the test production of the device should have started. The Apple AR/VR headset is also scheduled to go into mass production in August or September. Finally, it is about the Apple Car, for whose autopilot function a Korean partner was probably found. Here are the sources with more information: