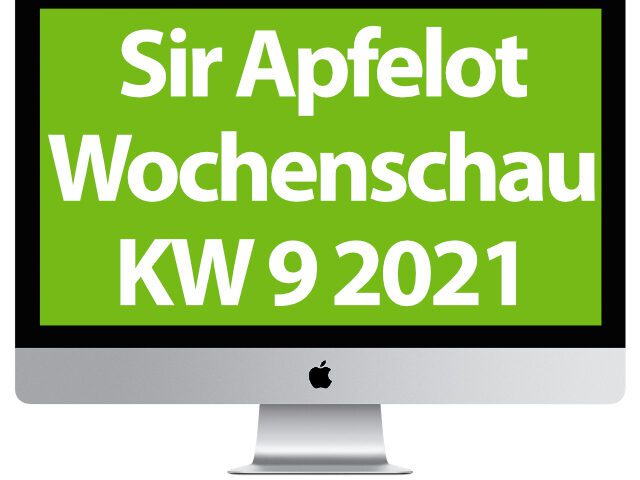 Oh, it's Friday again. Then of course it will be time for a new edition of the Sir Apfelot newsreel. This time I'll show you which Apple and tech news caught my eye in calendar week 9 of the year 2021. Among other things, these messages are included: Completely write off computers in the year of purchase, uniform battery for e-vehicles from different manufacturers, the processor of the Mars rover Perseverance, alleged connection between Apple Card and Apple ID, rumors about upcoming Apple devices, concrete Notes on New Nintendo Switch, and more.

Included in the Sir Apfelot weekly newsreel for calendar week 9 in 2021: Write off computers and software in just one year, standardized battery for various e-two-wheelers, Perseverance CPU, jailbreak with unc0ver 6 and more.

New computer: Now write off within one year instead of three

Among other things, the specialist magazine t3n points in one Post to the new tax rules, according to which new computers or similar devices can be completely deducted from tax in the year of purchase. This regulation applies retroactively to January 1, 2021, so that you can have devices that you have already purchased treated accordingly for tax purposes. In addition to computers, this applies to computer components and software. The new regulation should be an incentive for companies to purchase devices for the home office of employees. BVL managing director Erich Nöll is also quoted: "[...] Residual book values ​​as of December 31, 2020 will be fully written off and taken into account for tax purposes in the 2021 assessment period".

Batteries for e-scooters and e-motorcycles: one design for four manufacturers

"A strong symbol: Honda, Piaggio, Yamaha and KTM with standardized exchangeable batteries“Is the headline of Netzwelt about a current one Entry. However, it is not yet about a series-ready battery or various two-wheelers that can use them. Only a consortium was founded by the manufacturers mentioned, the aim of which is to create a replaceable battery with a uniform design. The uniform standard should not only serve environmental protection. Because the batteries should be exchangeable (i.e. removable from the two-wheeler), they can easily be charged in the apartment. So if you live in an apartment building, park in the underground car park or the like, you don't have to lay extension cables or take other detours.

The “PowerPC 750” processor, which is in the iconic iMac G3 from 1998, is also used in the Mars rover, which recently landed on our neighboring planet. The CPU, equipped with only one core and only 233 MHz, seems to have fallen out of time and one can wonder why no more modern technology is used. 9to5Mac has the right one for it Answer. It's simply about reliability ("What it comes down to is reliability"). There are adjustments, of course, and the iMac chip is not 1-to-1 the same as the Perseverance chip. The latter can withstand much more radiation and works in a temperature range of -55 ° C to 125 ° C.

Among other things, the current iPhone 12 models should be able to be jailbroken with the unc0ver 6 tool. The iPhone ticker shows that in one Entry on. "unc0ver is able to manipulate the iPhone and iPad in such a way that (advanced) users install any system extensions and their devices are more like a full-fledged computer and less like a [...] Be able to use a smartphone", is it [called. The linked source also mentions that Jay Freeman is suing Apple because the iPhone manufacturer does not allow Cydia as an alternative app store on devices without a jailbreak.

Referring to a Tweet von Dustin Curtis from New York has iFun berichtetthat apparently an unpaid Apple Card bill should have led to the user's Apple ID being blocked. Not only that, the iCloud and the App Store are said to have stopped working at Curtis. According to one Message from 9to5Mac, Apple has now denied that the two processes are connected to one another. Rather, the services were frozen because a trade-in device that had to be sent in as part of a new Curtis purchase was not sent in. According to him, this was due to the fact that the return box never arrived. Twisty, and hopefully just a coincidence.

Some rumors that MacRumors currently have with regard to Apple analysts Ming-Chi Kuo we already know. Above all, the iPhone display with 120 Hz has been in discussion for a long time. It is also said that the iPhones in 2022 (or at least some models) should not have a notch, but a punchhole camera in the display. The iPhone SE, the new edition of which is also due to appear next year, is rumored to be equipped with 5G mobile communications. Here you can find the individual sources with further details and statements:

macOS 11.3 Beta - Rosetta deactivation in some regions of the world

In addition to the useful feature of being able to map game controller inputs to the keyboard and mouse, version 11.3 of macOS Big Sur should also bring bad news. For example, the "Rosetta" emulation tool is to be deactivated in some regions. Rosetta ensures that programs written for Intel processors are “translated” on new M1 Macs for use with Apple Silicon. It is unclear whether this has anything to do with licensing or copyrights. Messages on the topic, including on this tweet from Steve Moser can be found at iFun (German) and MacRumors (English).

Items or perhaps “accessories” as a German translation should be part of the iOS 14.5 Where is? App on the iPhone. This should allow accessory devices to be kept in a virtual eye, even if they do not come from Apple, but from third-party providers. MacRumors cited as examples at this point Beats headphones or upcoming Belkin in-ear headphones. In the future, Apple's AirTags should also be able to be displayed via the new tab in the app for the device search - when they come onto the market.

New Apple patent: MagSafe charging socket instead of Lightning on the iPhone?

According to one, both electricity for charging the device battery and data should be able to be sent through the new magnetic connection Entry from Patently Apple. It is about a patent that was awarded to Apple and which deals with new forms of smart connector connections. It is not entirely clear whether this type of connection is planned for the iPhone and / or the iPad. In addition, it remains to be seen whether the patent will eventually lead to a new connection to an Apple device or whether the tech giant just wanted to secure another invention as intellectual property. You can find pictures on the topic in the linked source.

The German trade magazine Golem shows in one Items on that Samsung should start producing OLED displays for a new Nintendo Switch from June 2021. This should still offer a resolution of 1.280 x 720 pixels and be 7 inches in size. So the big difference is that no LCD is used anymore. The source of the information is a Items called by Bloomberg. If the information provided is correct, it is said that the new Nintendo Switch could appear as early as Christmas this year. In TV mode, it should then offer 4K output instead of Full HD. In addition to the graphics, the computing power should improve.