I don't know how often I wanted to send the Firefox browser to nirvana because it has become so incredibly slow that you get the feeling that the Mac has to copy 20 GB of data to 5 different hard drives at the same time and the startup volume is full has become. Every few seconds it hangs up for a few seconds and then you can continue. The scrolling gets stuck and the keyboard entries only arrive in the editor in several stages.

What the Mac can do at the same time ...

Just today it was the case again when I was the article on the Thunderbolt docks wrote. I had a number of windows open in the background and an external monitor on my MacBook Pro, which was also full of windows. Basically, the MacBook Retina can do a lot. Videos in Final Cut Pro Rendering and stitching together with Autopano Giga Panoramas is no problem. Even if both are running in the background and I am writing a few emails on the side, the smooth work does not disturb. But obviously Firefox is much more stressful than adding 2 GB of panoramas together. :(

Unfortunately, the browser change is not debatable

You could now say "Don't be shy, just use Google Chrome or Safari!". Yes, you could say... but if you have installed a number of addons that are simply not available for Safari and Chrome - like me - then it's not that easy to switch. I need the addons for my work and that's why I've had Firefox as my default for what feels like a decadeBrowser. So you can't switch!

A nice browser with quirks: Firefox.

I have often had the feeling that the guys from the Mozilla Foundation somehow managed to get Firefox to switch off multithreading and seize all CPU power. It's strange what's going on. The phenomenon has accompanied me through some Mac OS X and Firefox versions and it doesn't seem to have been resolved to this day. But today I was really fed up. After I finished my article, I got to the bottom of the matter.

My first tip in such cases would always be that the [Mac's startup volume full-> mac-startup volume-full] is. When that happens, the system becomes really extremely slow. But since I still have over 50 GB free, that couldn't be the case. Also the random access memory was not really busy with 10% according to [iStats Menu-> istats-menu]. So there was only the CPU leftthat maybe somehow at the limit.

The activity display provides quick information about the processes that are currently using the computing power. Firefox does it twice.

Now it was time to test. I first killed the process by marking it and then clicking on the button with the cross in the top left of the ad. Then there is a window or you want to "Quit Immediately" or "Quit". I once took "Quit" and after 2 seconds the process was gone and Firefox was "fast" again.

With a click at the top left, the CPU-demanding process in the activity monitor is switched off.

With that the villain was already found. It is the plugin that is responsible for displaying Flash content on websites. Now I also know why Steve Jobs NEVER wanted Flash on his iPhone. He was so right ...

Since I only classify Flash as useless website decoration anyway, I can't be missing much if I throw it out. To do this, type "about: addons" in the address line in Firefox. Then a list of the plugins that are installed in Firefox appears. Unfortunately, it is not that easy to uninstall (there will be an article on how to do it shortly), but in our case it is sufficient if we deactivate it. To do this, we look for the "Shockwave Flash" plug-in and then click on "Never activate" on the right, where it says "Always activate". Now restart Firefox.

The process only starts for certain websites

I just noticed during testing that the "Firefox Content Plugin" process does not start immediately with Firefox, but only becomes visible in the activity display when you visit certain websites. This happens to me, for example, when I call up sub-pages from Giga.de, such as: http://www.giga.de/film/ 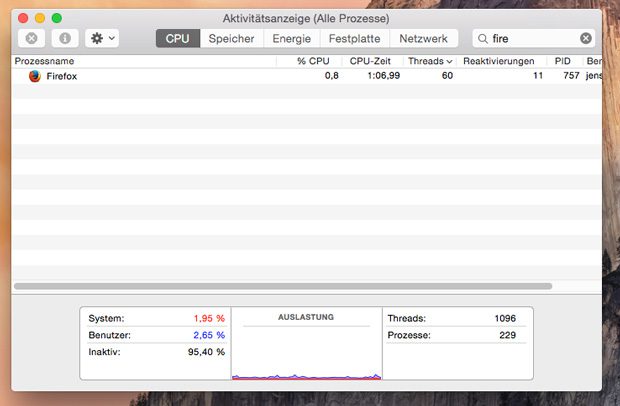 The text filter at the top right can be used to limit the display to certain processes. As you can see, the Shockwave Flash process no longer works for me.

Try it yourself and watch the activity indicator. At the top right you can type in "Firefox" in the text filter. Then only the processes "Firefox" and "Firefox Content Plugin" will be displayed and you can quickly see whether the plugin is deactivated or not.

So, now a non-alcoholic beer on a quick Firefox! :)