You have to be 11 apps: The best soccer games for iPhone and iPad 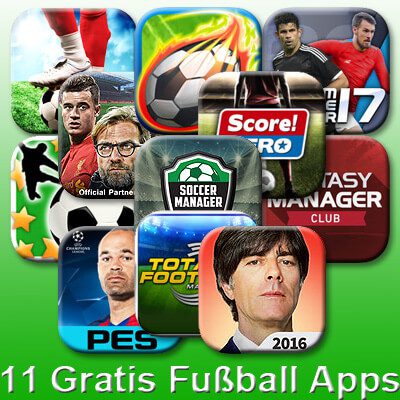 Soccer apps for iOS represent the expansion of a passion of many people into the virtual mobile world of iPhone and iPad. If you are looking for entertaining, challenging and sophisticated soccer apps for the iPhone or iPad, then I have something here for you to you. I have selected 11 free programs from the Apple App Store that enable football fans not only to play digitally, but also to manage them virtually. Without further ado, here are the 11 best soccer games for iPhone and iPad ...

Two screenshot examples from the following list. Click and type into the best soccer apps for iPhone and iPad. There is a link to iTunes for the soccer game apps.

The soccer game for iPhone and iPad from New Star Games leaves no aspect of the soccer world out: In New Star Soccer you play a young kicker talent that has to work its way up. Take care of skills, social relationships and your career - you can also be bribed! The sophisticated game has received several awards.
View and download New Star Football here

The game score! Hero is the complete opposite of the previous soccer app for iPhone and iPad. Because instead of building a team, its reputation and the stadium, you kick your way here level by level to the glory of your virtual player alter ego. Meander through the opponent's defense and learn new tricks - in a lengthways format!
Score! Watch Hero on iTunes

Fantasy Manager Club: diligently to the Bundesliga and Champions League

With this iOS app for iPhone and iPad you slip extensively into the role of club manager. Don't just take care of the players and tactics, but also the rest of the staff in the club! Work your club team up to the Bundesliga and Champions League. A really sophisticated free game.
Download Fantasy Manager Club here

Granted, the guys from Jolta Technology from Hong Kong may not be the best at translating the app description into German, but the app is Football Real Soccer itself is fortunately in English. There are quick games and championships, tournaments and pretty good graphics.
Football Real Soccer Download

The developer KONAMI has with PES CLUB MANAGER released a handsome simulator as an iOS app. In the program for iPhone and iPad you set up your team, adjust tactics in real time and play with official teams. The better the team, the more your city can be expanded.
View PES CLUB MANAGER here

Head Soccer: No ordinary soccer app for iPhone and iPad

You don’t feel like one of the normal soccer simulations for iOS? Then check out the game Head Soccer at. A mixture of fantasy, angry birds and a bit of soccer awaits you. Shoot gates that can be seen: ice, lightning, fire and dragon gates offer variety ...
Download Head Soccer from iTunes

With the app Soccer Manager There are 3.000+ real clubs and 70.000+ real players - how strong they are in each case is decided by the community. The success of your team is in your hands because you manage it - but the opinion of the users has a great influence. An exciting simulation!
View Soccer Manager for iOS here

Total Football Manager Mobile: Football tactics on iOS and on the Mac

Aeria Games GmbH has with Goal One released an app supported by the DFB for fans of soccer apps. Put your team together, fight your way to the Bundesliga, form the national team, manage the club, players and stadium ... Everything is possible with this simulator.
Goal One - DFB Football Manager on iTunes

Once again, the app comes from the software company KONAMI PES COLLECTION. The app does not belong to the playing field or manager apps, but is a trading card game with a duel function. Individual players in the deck have special skills. Whom Yu-Gi-Oh! So if it is too unworldly, you can play this or similar apps with football players as actors.
Download PES COLLECTION for iPhone and iPad

The best soccer apps for iPhone and iPad

What do you think of this selection of soccer apps for iOS from Apple? Do you know any other / better games for iPhone and iPad that deal with football, Bundesliga and management on the smartphone? Feel free to leave a comment with your opinion and your experiences! :) Good kick!