Today I had another strange experience that I would like to describe here - in the hope that there will be more people who have this problem and are therefore happy about the solution. The trigger for my problem was the update of Adobe Photoshop, which was installed automatically a few days ago. It is about the jump from Adobe Photoshop 2021 to the Photoshop 2022 version. With this update, Adobe has apparently optimized the software for the Apple Silicon Macs (M1 Macs), because all of the plugins and filters that I used to be had suddenly disappeared always used.

My popular Photoshop filter called " luminar"could be reintegrated into Photoshop with a simple installation. What needed a lot more persuasion was that Photoshop plugin "TinyPNG", which ensures that the graphics are exported as space-optimized PNG or JPG files for the web. It is usually visible under File> Export. In my case, the menu entry was no longer visible despite the reinstallation (put plug-in and license file in the "Plugins" folder).

I then wrote to support, who told me that the plug-in was not yet optimized for M1 Macs and would therefore only run on Intel Macs. I then wrote back that I had been working on an M1 Mac for a year and had been able to use the plugin the whole time. The reason for this was - according to TinyPNG support - that my Mac apparently started the plug-in with Rosetta and therefore it was running. 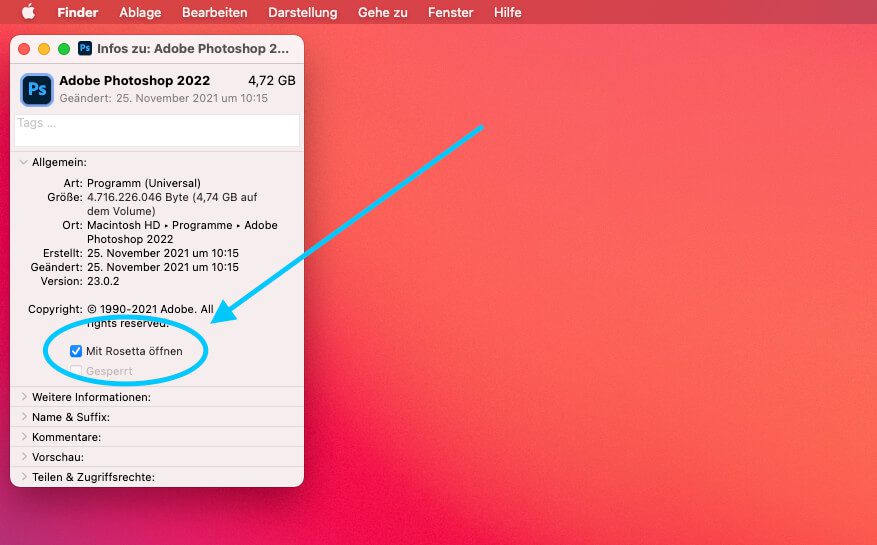 In the Adobe Photoshop information window, click the "Start with Rosetta" option so that non-M1-optimized plugins also run.

How do you start a Photoshop plug-in with Rosetta on the M1 Mac?

That was the big question about the price. I reinstalled Rosetta and tried to start the plugin on my own, but nothing worked until I happened upon the option that you can specify in the Finder whether a program should start with Rosetta or "normally". And exactly this option is also the solution to my problem with the TinyPNG plugin.

So the trick is not to somehow start the plugin with Rosetta (that doesn't work because it's not a standalone program). Instead, you have to start Photoshop with Rosetta so that it starts the plugin in turn. And this is how it works: 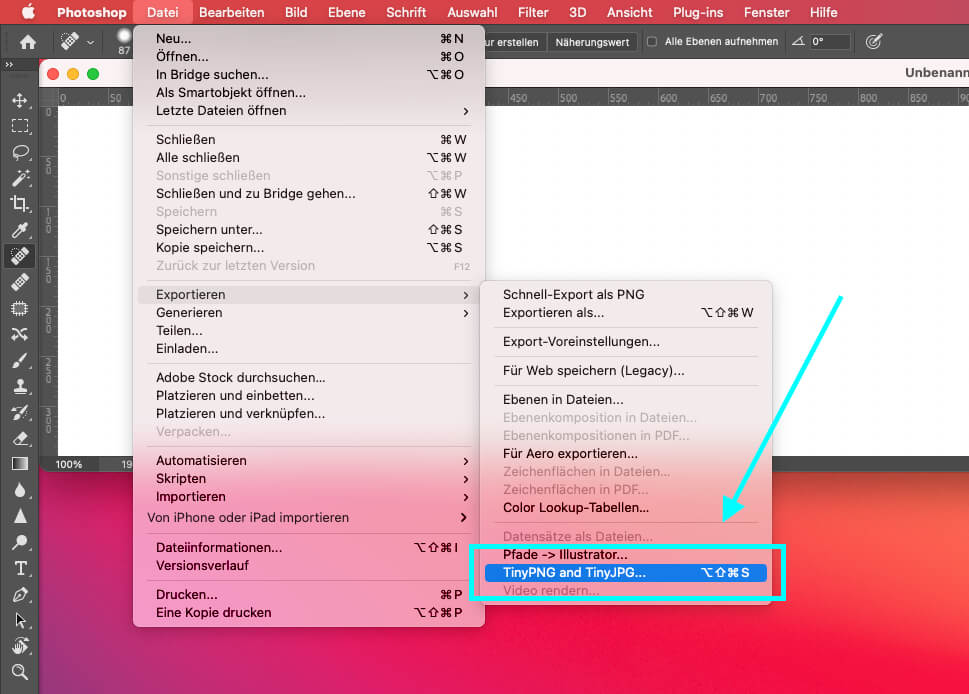 After starting with Rosetta, the TinyPNG plug-in can be found under the export options again - as it should be.

The downside is that Photoshop is now running slower than it could. On the M1 Mac, however, this should be bearable, since these computers are insanely fast anyway.

The advantage: By opening it with Rosetta, you not only have your beloved third-party plugins back in Photoshop, but you can also use the technology in Adobe, Premiere, Final Cut and many other apps that integrate small add-ons from other providers that may not yet be optimized for Apple Silicon.

First program start with a delay

One more note: the first time you start software with Rosetta, it can take a little longer. This is because Rosetta creates a "translated" version of the app and saves it. In the future, however, the start will be quick again because macOS can fall back on the version that has already been translated.