Almost everyone probably knows this: You come to your computer in the morning and want to start work, but the Mac has secretly planned completely different things. In my case, it started blowing the fans right after booting up. The sound always makes me nervous and I tried to bring up the activity monitor.

When I saw how the letters appeared little by little while typing in Spotlight, it was already clear to me that some process was running amok again and slowing down the Mac. 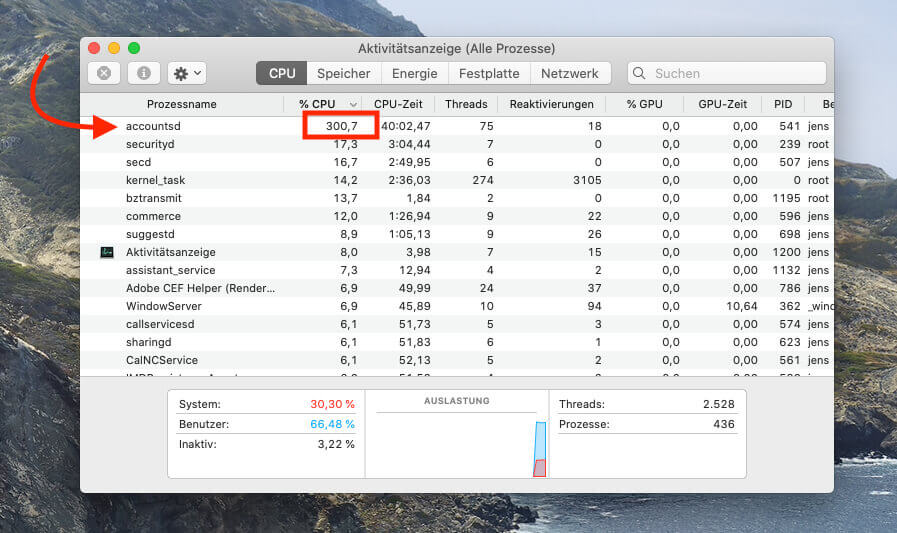 Sometimes my CPU load was even over 560% - this is due to some iCloud activities that are carried out by the accountsd process.

"Accountsd" process - something with iCloud ...

The process “accountsd” appeared at the top of the “CPU” tab in the activity display. Directly underneath is usually “kernel_task” somewhere, because it tries to slow down the Mac so that the CPU does not burn out. So our main problem is "accountsd" - this time as not "mdworker"which has also sweetened my day before.

When I searched Google for it, I came across one longer thread in StackExchange encountered, in which a number of Mac users discuss this phenomenon.

When it comes to the exact cause, people vary between Spotlight, Calendar, Mail, and Gmail accounts, but there's one thing they're sure of: it has something to do with iCloud.

You can quickly determine whether the problem is with the mail app by simply closing it. If the accountsd process is still represented in the activity display with over 100% CPU load, then it has nothing to do with it. Gmail was also out of the question for me because I don't use Gmail.

Solution for me: logging out of iCloud and Spotlight

There was no improvement for about three to four minutes, but while I kept searching the internet for solutions, I could see the CPU load suddenly drop out of the corner of my eye.

Here you can clearly see the drop in CPU load that occurred after 1-2 minutes - you have to be patient when you have logged off iCloud.

When the CPU usage was normal for a few minutes, I removed the “Macintosh HD” from the Spotlight data protection tab so that it could be indexed again.

I have also signed in to iCloud again so that I can use the service. This led to a brief peak in CPU usage, which calmed down after a few seconds.

Since then only the process "mds" is represented with over 50% in the activity display, but this belongs to Spotlight and is of course now busy with rebuilding the Spotlight index. 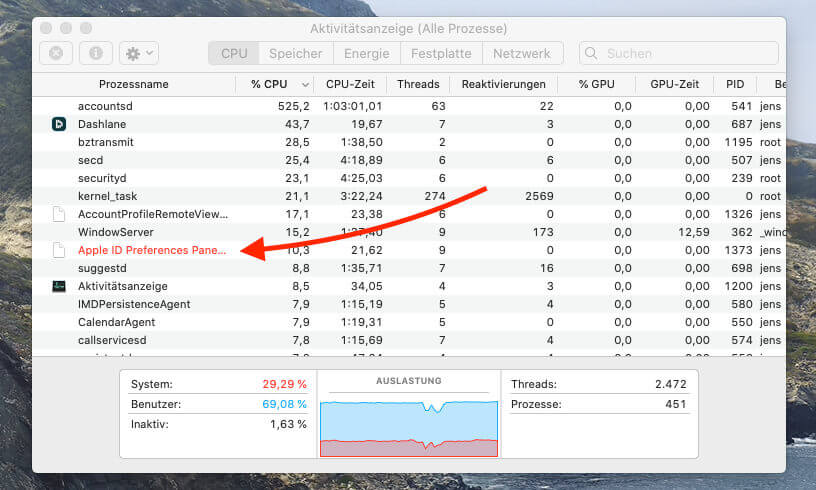 When I logged out of iCloud, the window with the system settings no longer responded. After a few minutes the logout was finished and everything went back to normal.

As far as I could read in various forum entries, the following procedure promises the most success: 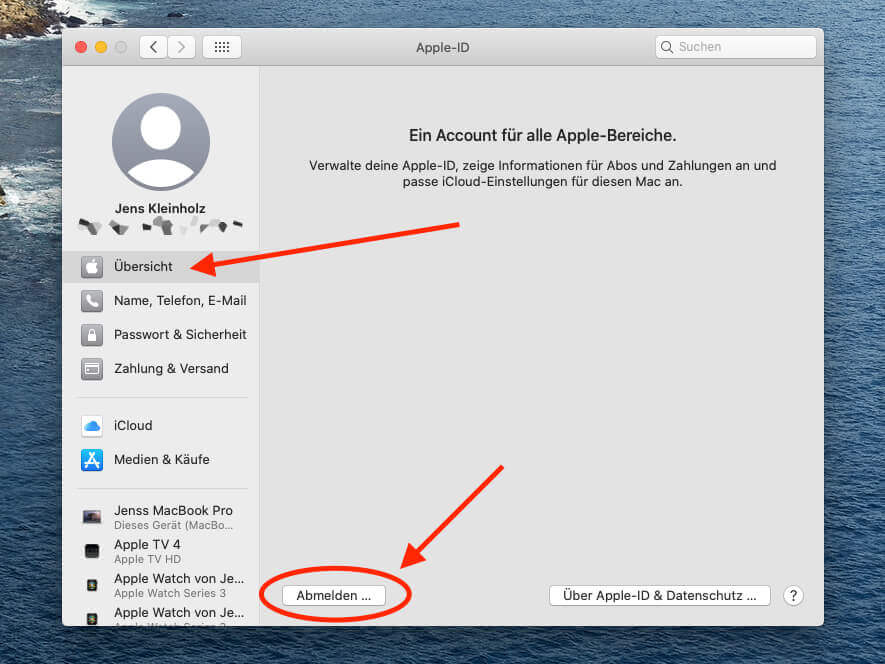 Signing out and signing in to iCloud apparently solved the problem for me - and a few others.

A Mac user wrote in a forum entry that he had brought the case with accountsd's CPU load to Apple Support. The feedback was that he was one Perform an SMC reset should (here for Instructions for resetting the SMC for T2 Macs). I don't think an SMC reset would have helped, but you can try it out. In any case, it can't do any harm.

Tip from a reader: start in safe mode

My reader Harald just wrote me that he could stop the crazy accountsd process with a restart in the safe mode was able to normalize again:

A user tried the following things, all of which did not help:

Ultimately, he was successful with the following terminal commands, which he in turn performed Reddit has found. Before you enter the commands: Please make a backup. I'm not a terminal person and I have no idea what the commands do exactly.

A throw-in from another reader (before you start using the terminal):

Attention with the terminal command: if the iCloud keychain is activated, it is sufficient to delete it (remove the hook in the setting, then confirm that the entries will be deleted from the computer) and play the 10.15.7 combo update over it. After the restart, the iCloud keychain can be checked again.

If one of the measures helped you, I would be happy to hear from you. Surely this is also helpful for other users, so that the process "accountsd" is tamed and the Mac can be used normally again.