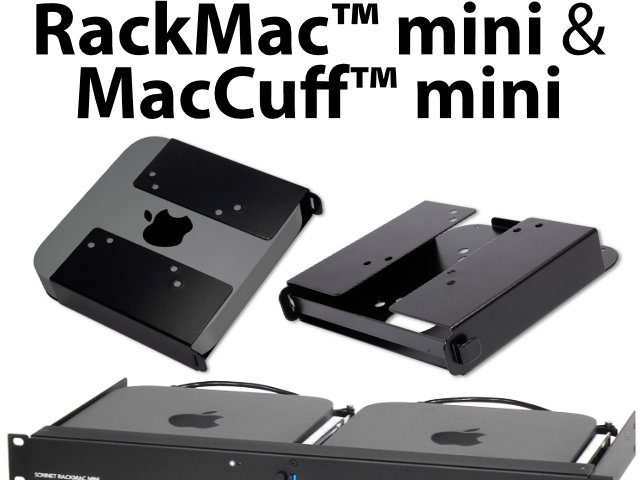 Sonnet, an accessory manufacturer from California, has a rack and bracket for the Apple Mac mini on offer. Both have been adapted to the current model from 2018 and ensure that one or two of the space-saving computers can be accommodated - on the back of the monitor, on the underside of the desktop, on the wall or in the server. In the following I have summarized some information about the Sonnet RackMac ™ mini and Sonnet MacCuff ™ mini. You can find a comprehensive article on the Apple Mac mini from 2018 here: Technical data, pictures, price.

The Sonnet RackMac mini and the Sonnet MacCuff mini are designed for the Apple Mac mini 2018 as well as for the models back to the 2010s.

With the RackMac mini and mobile rackmount housing, up to two Mac minis can be securely mounted. The standard 19-inch rack offers users direct access to the power switch of each individual Mac mini and a USB-A port on the front. The computers can be switched on and off easily and peripheral devices such as a keyboard, mouse or other USB device can be connected without having to tamper with the back of the computer.

With the RackMac mini, the small computers are also mobile and protected. In portable racks as well as in OB vans or flight cases: the robust steel housing is only 8,25 inches or 20,96 cm deep and has fixed rubber buffers that hold the computer in place during transport. With the revised design, the RackMac mini now supports the Apple Mac mini models from mid-2010 to the end of 2018.  Optimal cooling is promised. Although the device is held securely, it is not prevented from dissipating the heat it has generated.

The mount help is available among other things at Amazon.

Rackmount for mini computers
The Sonnet RackMac mini is intended as a storage aid for an Apple Mac mini or two of these small computers. Whether in the server, in the OB van or for safe transport while traveling - dimensions and design are specially designed for the computer models from 2010 to 2018.
252,14 EUR −16,29 EUR 235,85 EUR
Buy it at Amazon Price includes VAT, plus shipping costs (updated: 27.11.2021 at 07: 20 clock)

With the MacCuff mini you can not only attach your Apple Mac mini to the wall, under the desk or on a monitor, but also secure it against theft. In combination with a VESA attachment and a security lock, thieves don't stand a chance. Due to the design, which is designed directly for the Apple computer, the power switch and the connections remain accessible at all times, so that switching on and off and changing peripherals are possible at any time - whether under the table or on the back of the display used. Like on the Amazon product page can be seen, a simple padlock already helps to secure the device.

Storage aid for small computers
The Sonnet MacCuff mini is ideal for attaching the Apple Mac mini to surfaces and other devices. The housing is also used to secure the computer, which has a bolt with a hole for a lock. More information on the product page.
Buy it at Amazon Price includes VAT, plus shipping costs (updated: 27.11.2021 at 07: 20 clock)