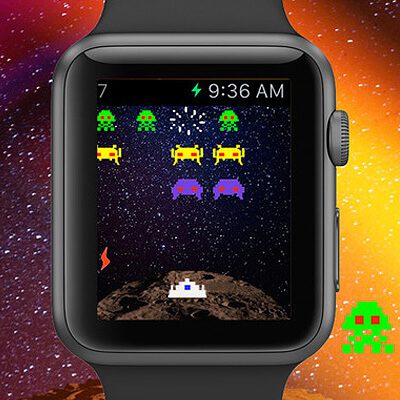 You want the retro game Space Invaders Download as an app for the Apple Watch? Nothing easier than this! Because from the developer Virtual GS there is a clone of the arcade classic for the smartwatch from Apple; called Invaders mini. Operation with the crown of the Apple Watch takes a bit of getting used to - but once you've got the hang of it (haha), Space Invaders should also be fun on the wrist.

Invaders mini as a Space Invaders clone for the Apple Watch

The classic shooter "Space Invaders" was developed by Taito and published in 1978 by Midway Games. The game, which to this day has lost none of its fascination and has also wonderfully shaped the pop culture of the last decades, is available in the form of different clones. On the one hand, you can play Space Invaders for free on the Internet or in the form of a free app for iPhone, iPad and Android devices. On February 15, 2017, the clone Invaders mini updated in the Apple App Store: Here you can take a look at the app page and download the game

This video shows that playing the game on Apple Watch is neither easy nor impossible. So if you want to play Space Invaders ... pardon ... Invaders mini anywhere, anytime, you can try the app:

According to the developer, the game can also be played on the iPhone. In addition, it can not only be controlled there, but also on the Apple Watch by touching the screen. So you don't have to use the watch's crown. Whichever version and control method of the Invaders mini app you choose: please leave a comment with your experience;)