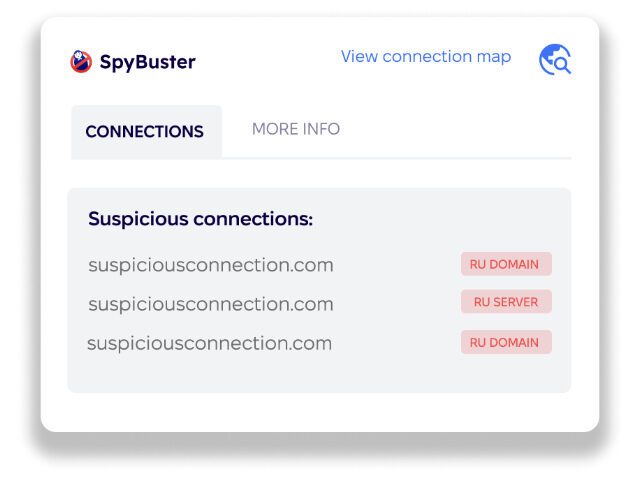 At the end of March, MacPaw has the free one SpyBuster app presented, their functions later also integrated into CleanMyMac X have been. The app shows users which apps come from Russia or Belarus and, if applicable, process their online data traffic via servers located there. However, the whole thing only works under macOS on the Apple Mac. So that even more people can see which data streams are running over Russia or Belarus, there is now the SpyBuster extension for the Google Chrome web browser. You can find the SpyBuster Chrome extension here in the web store.

In addition to the SpyBuster app and the SpyBuster functions integrated into CleanMyMac X, MacPaw now also has a corresponding web browser extension for Google Chrome.

While the SpyBuster app for macOS allows blocking unwanted connections or deleting apps instantly, the extension for Google Chrome only informs about connections from websites to servers in Russia or Belarus. For instructions on how to block specific sites in Google Chrome, users can visit the SpyBuster extension's "More Info" menu. Similar to the macOS app, users decide for themselves whether they want to entrust their data to a server or not. As a Ukrainian software company, MacPaw has decided to protect its users from data espionage from the countries mentioned - hence this extended offer.

The accompanying press release states, among other things (loosely translated): According to the Microsoft Digital Defense Report 2021 53% of all cyber attacks come from Russia. The three countries most targeted by Russian cyberattacks are the United States, Ukraine, and the United Kingdom. That's why SpyBuster is an up-to-date preventive application for users from all over the world.

Furthermore, the benefit of the extension is explained on the web store page linked above: In July 2016, Russia enacted Federal Laws No. 374-FZ and 375-FZ. The law obliges telecom companies to store the content of voice calls, data, images and text messages on Russian servers for six months, and to secure their metadata (e.g. time, location, sender and recipient) for three years. Online services such as messengers, emails and social networks that use encrypted data must allow the Federal Security Service (FSB) to access and read their encrypted communications.