Star Wars stickers for MacBook: Stickers from Episode I to Episode VII

MacBook sticker are very popular and are particularly suitable for the older models where the bitten apple by apple still lit up is. Because by sticking over stencil-like stickers, new illuminated shapes can be created from it. But also for newer MacBook models there are beautiful ones High quality Star Wars stickers and with very good reviews on Amazon. I would like to introduce a few of them here.

Star Wars sticker for MacBook: Darth Vader and the apple

There would be that one, for example Sticker designed for the 13-inch MacBook Pro or MacBook Air and shows Darth Vader reaching for the Apple logo. The self-adhesive vinyl holds on its own on the lid of the MacBook, which should be cleaned before mounting. Removal is as easy as application. According to the manufacturer, the shelf life is 3 to 5 years. 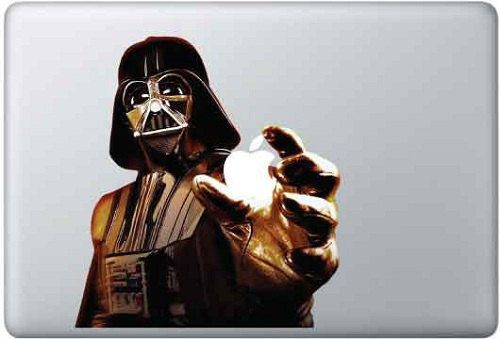 Darth Vader as a sticker for the MacBook; Image source: Amazon

Here you can order the Darth Vader MacBook sticker from Amazon

Here is a customer review with the title "Also fits a MacBook Pro 15 ″":"I absolutely wanted the motif here, but it's only available for Air and the 13 ″. It doesn't matter, I thought to myself and I ordered it on good luck and it was worth it. It looks great, the apple fits 100%, it starts a little higher at the bottom, but it looks good, you won't notice if you don't know. The material is also PERFECTLY very thick, can be glued on very well without problems and it lasts. [...] "

Darth Vader bit off the apple

If you ended up here because you were after MacBook sticker is looking for that suggests that Darth Vader bit off the Apple logo, then this way please! 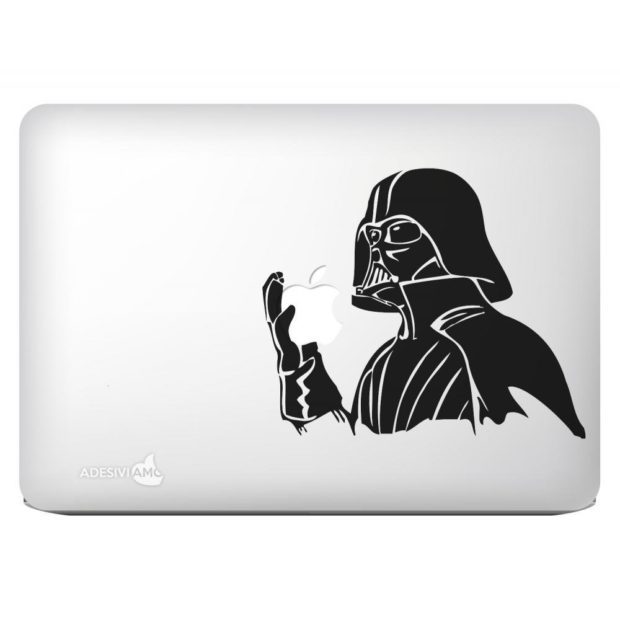 A hungry Darth Vader as a sticker for the MacBook; Image source: Amazon

It's a Mac (MacBook sticker of the "It's a trap" meme)

"It's a trap“- this saying with the corresponding scene from Star Wars has become a meme. With this sticker for the Mac it says "It's a Mac". 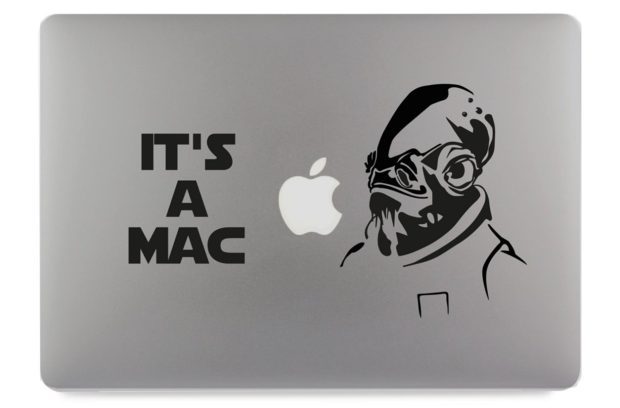 It's a Mac as a MacBook sticker - a modification of "It's a trap!"; Image source: Amazon

Not only internet nerds, but also real Star Wars fans will understand the fun. And the MacBook is also being beautified. In addition, there is the MacBook sticker for devices from 11 "to 17" gives.

The symbol of the Jedi as a MacBook sticker

The symbol of the Jedi is also available as a sticker for the MacBook. Here, too, the focus is on covering the Apple symbol when using it. It works very well when it is illuminated, but it also looks very good without lighting. The Jedi sticker for MacBook is available for models from 11 to 17 inches and costs the same in all sizes.

Here you can find the Jedi sticker on Amazon.de

TIE Fighter as a sticker for MacBook, MacBook Pro and MacBook Air

The TIE Fighter, or TIE Flieger, one of the spaceships of the dark side, is also available as a MacBook sticker. The hull of the spaceship covers the apple - but it can also be placed elsewhere. The power ... um ... the decision is yours! The same goes for Han Solo's Millennium Falcon, which it also calls Stickers for the MacBook gives.

Chewbacca and BB8 as stickers for the MacBook

One of the stars from all previous episodes and the new little friend from Episode VII - both are also available as stable and durable stickers for your mobile Apple computer. While Chewbacca on the Amazon product page is also intended to cover the apple BB8 cheeky in the corner. Here you will find the two products that also go very well together:

Conclusion on the subject of MacBook and stickers

You can embellish your mobile Apple computer in different ways and the Star Wars motifs are definitely an eye-catcher. Personally, I would have had one more bitten Death star Found cool, but even so, the selection for fans is quite passable. ;-) Speaking of the Death Star: Here on Youtube there is a cool tutorial on how to make a death star out of an IKEA lamp. Also worth seeing!

MacBook sticker are always a good choice - and the self-adhesive ones made of vinyl are not only quick to apply, but also easy to remove. They are also durable and robust. Ideal for devices that sometimes have to be transported from A to B. How do you feel about the design of your laptops? You also use MacBook sticker; and if so, which ones? Are you also on the Star Wars trip or do you find one Batman better?

Update: Will the sticker damage the MacBook?

The question recently arose whether the sticker could damage the surface of the MacBook. I read about this in various sources and can report the following: The aluminum surface of the MacBook is anodized so that it is chemically aluminum oxide. From a chemical point of view, this is even more resistant to influences than pure aluminum. So there shouldn't be any permanent "damage" to the surface when you remove the sticker.

What can happen: It is possible that the adhesive cannot be completely removed. In this case, the sticker should be heated with a hair dryer before peeling off. This makes the glue soft and easier to remove. You can get rid of leftovers by sticking a piece of scotch tape on it and then pulling off the leftovers. I would rather not recommend cleaning petrol. Otherwise you can get the glue off easily with a cloth soaked in olive or sunflower oil.

You should be a little careful when sticking the apple on the top of the MacBook. This is usually made of plastic and is more "sensitive" than the aluminum housing. If possible, I would choose a sticker that leaves the apple free or ask the manufacturer whether the glue could damage the plastic. As a rule, I think the stickers are developed exactly for this purpose and made in such a way that no damage to the MacBook occurs.

I hope even if your not all day KOTOR 2 you have found a suitable makeover for your portable Mac here. I'm still waiting for deco stickers to be made available only by adhesion stick. Then all the worries about stains caused by glue residue would be over.