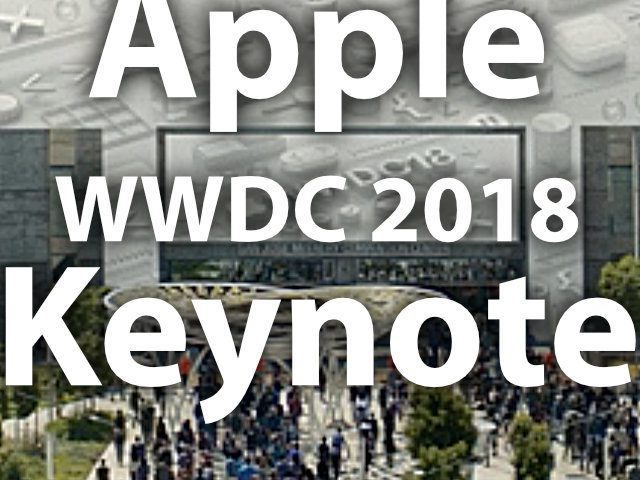 On Monday, June 4, 2018, the Apple WWDC 2018 Keynote took place in San Jose as the kick-off event for this year's developer conference of the technology giant. "Today is all about software," said Tim Cook in the introduction to the presentation, which lasted 2 hours and 15 minutes. New devices were therefore not presented, but “only” the new features and innovations in Apple's four operating systems: macOS, iOS, watchOS and tvOS. With my summary, I may be late for many today - but I already gave you the main information in the last two days:

The Apple WWDC 2018 Keynote served as a presentation of the innovations in iOS, macOS, watchOS and tvOS. The corresponding upgrades will be available from autumn.

It has become a tradition that Apple events, particularly the JuneKeynote to the WWDC, will be opened with a video. Similar to how some speakers begin their performances with a joke, the Apple team starts with a little film that is sometimes emotional, sometimes informative, but always takes a look at what's to come with a smile.

And so it was this time too. The opening video of the Apple WWDC 2018 keynote presented the arriving developers as shy wild animals who gather at Apple like at a watering hole and want to soak up the knowledge of the professionals. The style and the voiceover are reminiscent of a BBC nature documentary:

Opening of the Apple WWDC 2018 keynote

After the video, the presentation was officially opened by Tim Cook, Apple's CEO, and the 6.000 spectators present in the audience as well as the streamers on their devices were welcomed. By the way, people from 77 countries were present; and Apple welcomes more than 20 million developers worldwide. The now 10-year-old App Store has been highlighted as the best reference point for apps and it has been announced that the payouts to developers realized through the App Store will hit the $ 100 billion mark this week.

Tim Cook also noted that over 350.000 apps in the Apple App Store have already been written with Swift - and that this programming language can give young people in particular a good introduction to programming. Programming or coding should be taught in schools all over the world anyway. Also, Cook concluded, the customer should be at the center of everything we (the tech companies, developers, designers and programmers) do.

And then it was said: “Today is all about software”, which immediately ruled out the possibility of new iPhones, MacBooks or other Apple hardware being released as new releases. So no iPhone SE 2, no Mac Mini and no new MacBook with a better keyboard.

Tim Cook introduced the individual sections of the presentation. However, Craig Federighi, Apple's senior vice president of software development, had the most speaking time Cupertino. Together with other colleagues (Kevin Lynch, Ann Thai, Jen Folse, etc.) and representatives from partners such as Adobe and LEGO, he showed what iOS 12, watchOS 5, the updated Apple TV 4K with tvOS and macOS 10.14 Mojave can do. Details on the innovations and features of the four operating systems as well as screenshots from the live stream of the presentation can be found in the articles linked above.

In addition, Apple has already uploaded the keynote as a video on YouTube - have a look:

In the end, the developers in the room and around the world should be particularly motivated again. Tim Cook does this not only with his summary of the innovations presented in the upcoming upgrades for the company's four operating systems, but with another video. Members of developers who are in the audience have their say. They tell about the drive, successes, failures and working methods of the respective software specialists. Afterwards Cook thanked everyone, especially the Apple team and their families. The closing words are: “Let's have an incredible week together. Thank you!"