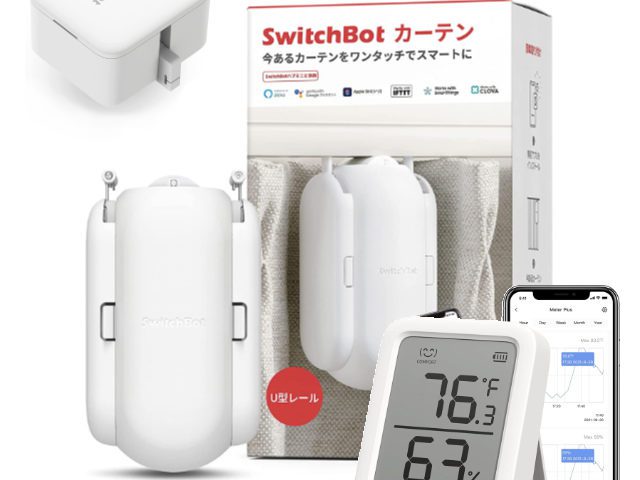 SwitchBot has various products that are designed to relieve you of tasks in the smart home. From opening the curtains on the window to operating various switches remotely to controlling the indoor air quality, everything is included. In the following, I will introduce you to the appropriate SwitchBot products for the three applications mentioned. If you want to see the entire range including sensors, surveillance camera and SwitchBot hub, you can do so in the official store at Amazon.

SwitchBot offers smart home accessories for curtains, switches and room air control, among others. The combination of these and other devices as well as sensors, heating, ventilation and Co. results in practical automation in the home.

SwitchBot Curtain for curtains and curtains

The first solution for the smart home is the SwitchBot Curtain electric motor for curtains and curtains. The device can be attached to curtain rods, U-rails and I-rails. The device can be triggered at the push of a button, via app, via a shortcut, via voice command, timer or preset scene. Because it moves along the rod or rail, it takes the end of the curtain with it and thus opens or closes the privacy and light protection.

This saves you having to open and close the curtains both in the morning and in the evening. Even if you like to forget the time, you are automatically notified when you should get up, turn on the light or go to bed. By pairing it with a light sensor, you don't always have to adjust the time for automation throughout the year, but you can activate the SwitchBot Curtain for curtains and drapes depending on the position of the sun.

SwitchBot Smart Switch Toggle for any type of switch

The second helper for the smart home from SwitchBot is a small lever for operating switches. This lever is in a small box and is moved out when the appropriate signal is given. Here, too, this can be at a certain time, with certain lighting, room air or other conditions, as well as in the context of a shortcut or a scene. Several SwitchBot Smart Switch Toggles can be monitored and controlled via the app.

You can therefore determine when the smart switch actuators are used and, if necessary, have this take place automatically. At the individual time and without having to use your hands, this also works via Amazon Alexa, Google Assistant or shortcuts triggered via Siri. On the product page for the SwitchBot Smart Switch Toggle Light switches, lamps, coffee makers, televisions, computers, pet feeders and more are mentioned as examples of use (see video in the product images section).

For the automation of humidifiers, heating, ventilation or windows or the Fan it makes sense to connect these devices to a thermometer or hygrometer. In addition to a large screen for displaying temperature and humidity, the corresponding SwitchBot device also has data transmission to the hub and to the smartphone app. In addition to the automation in the smart home, the monitoring of the values ​​on the go also works. In addition to real-time data, the development of the values ​​can also be viewed in a diagram.

In addition to the use in the living room or kitchen, the use of this smart thermometer-hygrometer combination in the children's room, in the pantry, in the garage, in the wine cellar or elsewhere is conceivable. Wherever temperature and humidity should be kept within a certain range, the small device can ensure that you not only have an overview, but that the right automation is always triggered when the values ​​need to be corrected. Also the SwitchBot thermometer and hygrometer combo can be found at Amazon.

SwitchBot discount at Amazon until April 13, 2022

Up to and including April 13, 2022 you can get a discount for the three products shown above. With the voucher code 10FZBANX the following price reduction results: